The alarm system at the lodge was triggered at 11:20 p.m. on Wednesday. Nearly 65 firefighters and 11 vehicles responded to the fire. Damages were estimated at more than $1 million. 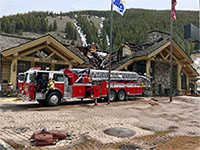 The lodge, made of river stones and logs, was built in 1993. It is one of two base lodges at Sun Valley.

In a statement, Sun Valley and the city of Ketchum said, ”It is too early to determine the full extent of damage to the building, but it is significant. The cause and origin of the fire are under investigation. The investigation will involve the Ketchum Fire Department, Idaho State Fire Marshal, and the Bureau of Alcohol, Tobacco, and Firearms (ATF). It is standard practice for the ATF to participate in a fire investigation when there is a commercial structure with over $1 million in damage.