What do China, shopping malls, and snowball fights have in common? All three were floated as possible ideas for increasing skiing and snowboarding participation during the Mountain Travel Symposium (MTS) at Whistler-Blackcomb in early April. 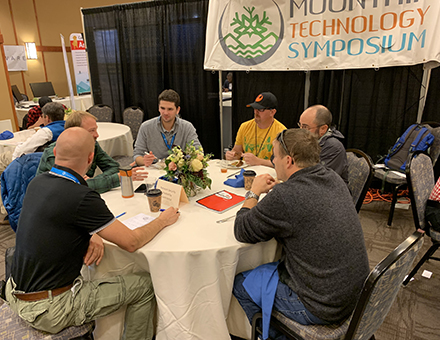 From the cavernous convention space of the Whistler Conference Centre to the hundreds of restaurants, nightclubs, and cafes in the pedestrian-only village, North America’s largest resort was pretty much taken over by MTS participants. Like most visitors to Whistler Blackcomb, MTS attendees took selfies, tweeted, and SnapChatted with their friends. All that shows how quickly times change: no one would have known what those terms meant just 10 years ago. And that's an apt reflection of how the industry will change in the future.

Consider the Forum's ultimate educational session. Billed as “the most important MTS Forum session in years,” the Growth Through Innovation Forum brought together six snow industry-related CEOs. Nick Herrin from the Professional Ski Instructors of America, Paul Pinchbeck of the Canadian Ski Council, and Kelly Pawlak from the National Ski Areas Association represented industry trade associations. Joe Hession, CEO of SNOW Operating and Snow Cloud e-commerce software, Karl Kapuscinski from Mountain High in southern California, and Xavier Mufraggi, CEO of Club Med North America rounded out the panel. Each participant shared both data-driven and personal insights into how the ski industry can thrive in the years ahead.

The Third Stage. Pawlak’s presentation focused on the development and growth of North American skiing in three stages. In its “evolutionary” phase from the 1950s to around 1970, the sport grew rapidly thanks to economic prosperity and technological advances like chairlifts, step-in “safety” bindings, durable metal skis and even the interstate highway system.
From that point to the present day, skiing’s reach (the “extend” phase) has widened due to innovations in snowmaking, high-speed lifts, snowboarding, terrain parks, and customer service. Going into the future, skiing must “transform” its business model or, Pawlak said, “It will enter into a long state of decline.”

Indeed, NSAA statistics show that over the past four decades, the number of participants and skier visits has stagnated at around 10,000,000 and 52,000,000, respectively. Challenging, if not somewhat alarming, trends can be found by drilling down further into the data, which show that as America has grown due to births and immigration, the number of skiers as a percentage of the American public is ebbing downward, to below three-percent participation since about 2012.

As wages have stagnated over the past 40 years, the cost of both seasons passes and lift tickets has gone up. Within the past decade, the average lift ticket has risen more than 60 percent, and despite the best efforts of the industry to promote various multi-area passes and programs to alleviate the sport’s cost, 55 percent of all skiing revenue comes from people paying full price at the ticket window. That squeezes more and more families out of the market. The result: While the number of households making more than $200,000 per year is currently around seven-percent nationwide, 23 percent of all skiing households make or surpass that level.

It’s little wonder that high cost remains a major barrier to why more people don’t ski. Despite the best efforts of the industry, participation rates for black and Hispanic skiers have stayed low, at around three percent for each.

Pawlak said, “Attracting new skiers will always be NSAA’s primary purpose. But we also want to engage with lapsed skiers who would like to return to the sport after being away to raise families or pursue careers. We want to reach out more to the core skiers who ski more than five times per year and encourage them to become ambassadors for the sport. These might be second-home owners and recent retirees who have moved to a skiing community and who support a healthy, active lifestyle.” The enthusiasm of these longtime participants could possibly guide the sport through its next growth phase.

Support for Resorts. Paul Pinchbeck, CEO of the Canadian Ski Council, sees a similar supporting role for his organization. “Our mandate is not to drive disruptive change like the Ubers and Amazons and other tech start-ups of the world," he said. "We’ve recently taken a good look at who we are and what we’re attempting to do as an organization. We are focusing on what we do best in order to grow the sport’s numbers—even if that means slimming down some of our less-effective programs. We want to provide our resort partners with the tools and data that they need to grow their numbers. Each program will have very specific goals and ways of measuring our success.”

Pinchbeck cited the CSC’s Never Ever program as a successful partnership, in which CSC research has been used to design effective programs for small and medium resorts to attract non-skiers. “We’re also partnering with provincial snowboard associations and the school system to create the Little Riders program. High-caliber snowboarders from club and provincial teams visit schools to make students aware of the sport and how they can get involved,” he said.

“We’re also creating opportunities to embrace new Canadians who might be afraid of winter and are unaware of the wide range of experiences available at local ski areas, many of which offer affordable activities that the entire family can partake in,” said Pinchbeck.

Expanding the Reach of Instruction. For PSIA's Herrin, innovation means making technical information and details about how to ski available to the widest possible range of participants. “The ski lesson experience is integral to how people engage in our resorts, and we want to equip new skiers with the right tools, such as instructional videos, to assist them before they come to the resort.”

Studies have shown that once skiers achieve a certain level of proficiency, they no longer take lessons, so PSIA has formed a partnership with SKI magazine to provide its readership with specialized video instruction that helps solve challenges like tackling the steeps and mastering moguls.

“Once they get to the mountain, they can take their abilities to the next level by hiring an instructor and getting much more from a lesson. We want our instructors to look upon ski teaching as more than just a part-time job, but to treat it like a calling," Herrin said. “Guest satisfaction surveys show that time spent with an instructor is the most rewarding, high-value experience that vacationers have, and we have to make sure that our product is exceptional.”

New Business Models. Hession believes that the ski industry is resistant to change when it comes to product marketing. Creating lifelong skiers from Generation Z, the very first “digital natives” to grow up with smartphones as extensions from both their fingers and brains, will be challenging. Hession said, “These younger people have been addicted to instant gratification, whether it’s through video games, social media, or any other online experience.”

Hession has worn many hats during his time in the ski industry, with his primary focus being on first timers and the multitude of challenges they face—from driving to the resort and parking to getting sorted out for rentals and lessons, getting on the hill, and having fun (Hession developed Terrain Based Learning in response to this.).

Of course, one way to introduce prospective skiers to the sport is to reach out to where they live, which is probably much closer to a shopping mall than it is to a mountain. As a result, Hession said, “We are not going to fight over the three percent, we are looking at growing the pie and going after that 97 percent who don’t currently ski or ride.

“Next fall, my partners and I will be opening Big SNOW, a 210,000-square-foot indoor skiing facility that will be in the second-largest shopping mall in North America. Located just five minutes off the Lincoln Tunnel in New Jersey, the $5 billion American Dream Mall is being developed by the Canadian family that created the West Edmonton Mall and the Mall of America. Big SNOW will open in September and provide a consumer experience that is part virtual reality, part on-snow lesson."

Hession explained, “Guests will be given a wristband and walk into a gondola, which will provide a virtual-reality experience of what a riding a mountain gondola is like at a major resort. When you get out of the gondola, a virtual assistant will outfit you with clothing, boots and skis and two hours of skiing.”

A Minority Outlook. As the closest ski resort to Los Angeles, Mountain High is uniquely situated to grow skiing’s potential. CEO Karl Kapuscinski believes that “Right now is probably the best opportunity we’ve ever had to grow the sport. There are 20 million people in the greater Los Angeles area, and 70 percent of our visitors now are non-Caucasian; Asians, Indians, Hispanics. We’re not here to sell you anything, at least not at first. We want you to have a good time. We just want you to come up and roll around in the snow or have snowball fights or go snow tubing. And when you do come up, you’ll be buying an experience that is in the $20 to $70 range, not $500.”

In the mid-‘90s, Mountain High’s demographic was radically transformed by snowboarding, which at one time accounted for 90 percent of its ticket sales. “We had all kinds of people coming up here who might never even have seen snow before. It wasn’t an old, rich guy’s sport—it was their own,” Kapuscinski said.

A Global Perspective. Few travel companies in the world have the name recognition of Club Med, although most travelers probably think “beach” as opposed to “mountain.” Club Med North America CEO Xavier Mufraggi sees huge potential in attracting the Chinese market in the years leading up to and after the 2022 Winter Olympics in Beijing. In the past year, 57 new ski resorts opened in China, and the goal of the Chinese government is to grow the business to more than 120 million skiers—not skier days—by 2022. Of course, when you are starting with a country that already has more than a billion residents, that’s perhaps not quite as outrageous as it sounds. But even 30 million participants would add significantly to the worldwide snowsliding population.

Ski culture is still being defined in China, and as Muraggi said, “Due to the size of the country and the scale of the ambitions, they must do things very differently than what has come before.” Skiing and snowboarding are not exactly top of mind for most Chinese winter travelers (Indeed, according to Mufraggi, the vast majority of skiers go only once and don’t often return—to the slopes, at any rate).

Club Med is already involved in China, with two all-inclusive vacation properties in Beidahu and Yabuli. Mufraggi said that Club Meds have been extremely popular with wealthy elites in emerging economies such as Russia, Israel, and Mexico. These are sophisticated travelers who enjoy luxury goods and services, but demand high value in return.

These diverse viewpoints capture the essence of the entire Symposium. Industry leaders will surely try their best to keep the sport—and their businesses—healthy in the future. And there are plenty of ideas about how to accomplish that, if resorts can keep open minds and think creatively.