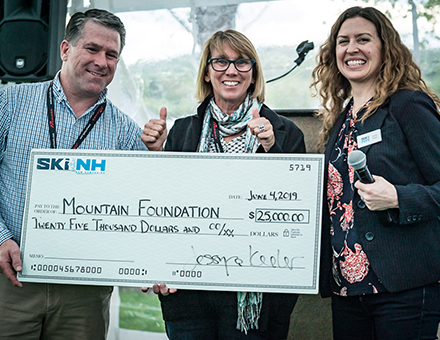 “The fact that we’re up over last year’s numbers is a testament to the season being strong,” said Keeler. She noted that a few key factors impacted the season’s performance against the 10-year average. Increased adoption of RFID and scanning technology across the state is providing resorts with more accurate visitor numbers than previously used estimates, which Keeler said typically results in a drop in reported visits.

Inconsistent weather was a factor as well. While visits were up early in the season and resorts made enough snow to stay open later into spring, the mid-season was slower thanks to the petering out of the November and December snowstorms and a lack of snow on the ground in Boston and southern New Hampshire.

Ski NH hosted NSAA President Kelly Pawlak and presented her with a $25,000 check for the newly formed Mountain Foundation employee grant program. The foundation will offer grants to industry up-and-comers to cover the cost of attending NSAA events. Applications for the first round of grants are due August 1 for the fall shows.