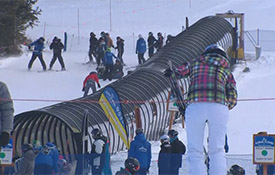 According to the chief deputy coroner, the preliminary cause of death is crushing chest injuries due to blunt force trauma. The resort said the incident happened around 11 a.m., and ski patrol was on-scene shortly after it happened. Lee was 40 years old.

Investigators from the Denver office of the Occupational Safety and Health Administration (OSHA) were on-scene Friday performing an investigation. OSHA area director Herb Gibson said, “The person got caught up in some of the equipment,” which was not in use when the incident occurred.

According to reports, an engineer from the Colorado Passenger Tramway Safety Board—which regulates ski lifts and is responsible for investigating any death or injury that could be the result of an equipment malfunction—performed an inspection that “revealed proper functioning of the lift,” said Lee Rasizer, spokesman for the CPTSB. Since equipment malfunction has been ruled out, the tramway safety board will not be involved with the investigation.

Gibson said it is likely to be at least a few months before OSHA investigators reach a conclusion about what happened.

While the root cause of this tragic accident is still unclear, it's a reminder to all mountain operations personnel to review and follow all safety procedures. Read about one aspect of risk management, lockout/tagout procedures, in "Control Hazardous Energy" from the November 2015 issue of SAM.