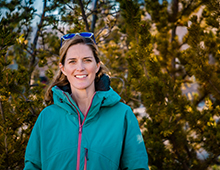 Walsh formerly served as the senior director of mountain dining at Park City Mountain in Utah. In her new role, Walsh will oversee all ski area operations at Northstar and report directly to Mike Goar, chief operating officer, Tahoe region. Of Walsh, Goar said, “Her passion for exceptional guest service and team collaboration will shape the future of Northstar and I’m thrilled to welcome her to Tahoe.”

Walsh joined VR in 2007 as the banquet and sales manager at Park City before being promoted to director of mountain dining in 2010 and then senior director of mountain dining in 2016. During her time at Park City, Walsh oversaw multiple major capital improvement projects that reshaped the dining experience at the resort, including Miners Camp, Cloud Dine, and Mid Mountain Lodge.

She replaces Nadia Guerriero, who transitioned from the role at Northstar to VP and COO of Beaver Creek earlier this spring.