SAM Magazine—Rutland, Vt., Jan. 7, 2020—Santa brought a mixed bag to North American ski resorts this holiday season, according to a spot survey conducted by SAM. The period included two Wednesday holidays, which stretched out the usual week-long Christmas/New Year’s holiday period into two solid weeks of business. The exception: in parts of the Midwest, some resorts had to close for portions of the period because of rain. Most resorts, though, thanks to the extra days, were close to or over their holiday averages, despite some at-times difficult weather in several regions of the country. 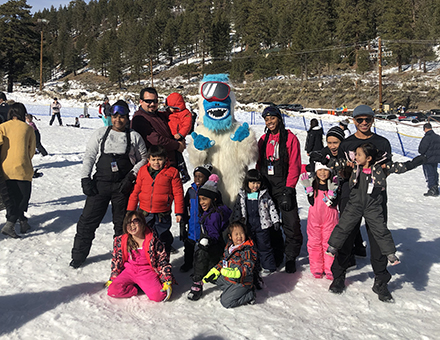 Mountain High, Calif., had a successful holiday period, introducing a diverse mix of guests to snowsports.

Some “just in time” snowstorms at the beginning of the holiday period helped save Christmas in the Northwest, even though a few resorts, such as Mt. Hood Ski Bowl, never got their ski slopes open. “Tubing’s been selling out there,” said Jordan Elliott, president of the Pacific Northwest Ski Areas Association, of Skibowl. Across the Northwest, he noted, “It’s definitely been a slow start in terms of snow totals.”

Utah had a strong holiday period, according to Raelene Davis, VP of marketing at Ski Utah, including a few “Utah powder” days (12 inches or more of new snow in 24 hours).

California had no snow over the holidays, but that was “probably a good thing,” said Mike Reitzell, president of the California Ski Industries Association. “There were no road issues,” he added. He recalled that last season, too much snowfall closed roads and made getting to the resorts difficult. By mid-December this year, some California resorts already had more than 10 feet of snow anyway, so the lack of new snow wasn’t a hardship for the holidays. Business kept up in the later stages of the holidays, too. “The Saturday after New Year’s was huge,” Reitzell said.

But well-timed snow just as the holidays were setting in at Mountain High in SoCal, located only 50 miles outside of LA, was a boon for business. "Skiers visits were up more than 50 percent from our five-year average, and it will be our best holiday period revenue-wise ever," said Mountain High president and CEO Karl Kapuscinski. He said a notable trend is the diverse crowd the resort is attracting, with more than 70 percent of first-time lesson takers being non-caucasion, and 60 percent of all visitors are non-caucasion.

Visits were not so huge in much of the Midwest, where record mild temperatures and rain over the holiday period caused some resorts to close and wiped out a great early start.

“The season got off to a good start for most people with early cold temperatures and good snowmaking weather,” said Amy Reents, president of the Midwest Ski Areas Association. “Unfortunately, the Christmas holiday for the majority of the Midwest was warm, and we had rain prior to New Year’s. It was tough on business for many. It also included some days of closed operation for some areas due to all day rain.”

“It was challenging to say the least,” agreed Mickey MacWilliams, executive director of the Michigan Ski Areas Association. “We had quite a bit of rain Christmas week.”

In the East, weather and business were more up than down.

Wachusett, Mass., had to close for the day on Dec. 30 due to weather, but still ended the holiday period up 12 percent over last season. Meanwhile, Jay Peak, Vt., received 23 inches of snow Dec. 30, which helped the resort make up for a poor first holiday week, and end the two-week period about 10 percent down year-over-year.

At Magic Mountain in southern Vermont, paid visits were up 54 percent for the holiday period, according to president Geoff Hatheway, who also noted the resort’s fixed-grip lifts were able to run all week despite some difficult icing conditions that knocked other resorts' detachable lifts offline. Overall, the Vermont Ski Areas Association said the eight member resorts that reported results were up 15 percent for the holiday period and 10 percent YTD, on average. The state’s open trail count was average: 47 percent on Dec. 25, compared to a 10-year average 48 percent. Last season, thanks to record December snowfall, 55 percent of trails were open for Christmas.

Jessyca Keeler, executive director of Ski New Hampshire, said business was down about 11 percent for the first week of the holiday period, but week two “looked more promising.” Results were still being compiled at press time.

Gunstock, N.H., general manager Greg Goddard said business was solid over the holidays despite some adverse weather events. “We’re about even with last year in visits and up in revenue,” said Goddard. “Lessons are a little soft, but I think that’s self-inflicted, as we were late getting some products on-line. Tubing was selling out every day, and retail and F&B were booming. Weather was definitely a factor on a couple of days, but we seemed to bounce right back.”

Elsewhere around the East, Le Massif, Canada, was “actually doing good over the holidays even though the season started very slowly,” said Maude Barrette Desjardins, marketing director. Desjardins said the resort had 22 of 53 trails open, and after snow arrived Dec. 30-31, saw a bump in visits.

At Holiday Valley, N.Y., marketing director Jane Eshbaugh said December was up significantly over the resort’s five-year average, but down from last year. “We’re hanging in there,” she said. Windham Mountain, N.Y., marketing director Dave Kulis said results mirrored the weather. “Generally speaking, the Catskills fared better than some areas to the north, and as a result, business was solid on days where the weather cooperated,” he said. For the Christmas week, the area was even on skier visits and up three percent in revenue compared to last year.

Snowshoe, W.Va., was also hanging in there after making a lot of early season snow and carefully preserving it over the holidays. “It was strong despite the weather not being ideal,” said Shawn Cassell, PR specialist. “We were pretty much booked solid right through and after New Year's.” Despite the warm and wet weather, he said most people kept their reservations. “We had a bigger miss on skiing than lodging,” he said.

In New Jersey, the holidays at Mountain Creek started very strong, but some wet weather and a power outage during the second half of the holiday dampened things a bit, according to VP of marketing and sales Hugh Reynolds. "Still, visits were up five percent over the prior year," he said. And at the newly-opened indoor ski area Big SNOW American Dream, where weather obviously wasn't a factor, Reynolds said business was booming. "We have been fully sold out for all session times each day since Christmas Day," he said on New Year's Eve. Big SNOW limits each two-hour session to 500 patrons.

Meanwhile, Beech Mountain, N.C., didn’t miss a beat, with record crowds between Dec. 26 and Jan. 2, and nearly 1,500 at the resort’s New Year’s Eve celebration. “We are really pleased with the traffic and were impressed with the different cultures of participants,” said marketing director Talia Freeman.

Now, for the rest of the season, may 2020 bring timely snow storms, bluebird days, and happy, high-yielding guests to all in ski country.