SAM Magazine—Marquette, Mich., Feb. 20, 2020—A staple of the Upper Michigan ski scene is changing hands. Peter and Lois O’Devero have sold Marquette Mountain and its surrounding 330 acres to Eric and Sarah Jorgensen of Hartland, Wis., owners of transportation company JX Enterprises Inc. Terms of the transaction were not disclosed. 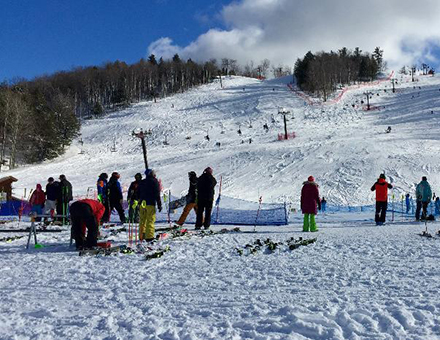 Founded in 1957 as Cliff’s Ridge, Marquette Mountain went through several owners until its business assets and surrounding property were acquired by the O’Deveros in 1987. The family recently invested in upgrading the mountain’s snowmaking infrastructure, completing pipe and pump house improvements ahead of this season.

Plans are already being formulated to increase the mountain’s ties with the nearby city of Marquette as well as Northern Michigan University. NMU recently announced it would be introducing varsity men’s and women alpine ski teams that will compete in USCSSA events, using Marquette Mountain as their home training site.

Eric Jorgensen said he was “…extremely excited for the opportunity that Marquette Mountain brings to the community and outdoor enthusiasts. I am especially thankful to the O’Doveros for working with me positively in this transfer including their fortitude over the last 33 years and recent improvements.”

Jorgensen is president and CEO of JX Enterprises Inc., a second-generation family business founded 50 years ago. He has long dreamed of owning a ski resort, saying so himself in his high school yearbook. Andrew Farron, general manager at Marquette Mountain, said Jorgensen represents “very strong leadership” that will draw in more visitors to the resort. “His entire marketing approach is based on the ‘Marquette experience,’ focusing on the college, restaurants, hotels, trails, campgrounds and sights that make Marquette special.”