SAM Magazine—Flagstaff, Ariz., March 6, 2020—Arizona Snowbowl will be replacing its Agassiz chairlift with a state-of-the-art combination Telemix lift from Leitner-Poma. The new high-speed lift will feature six-person chairs interspersed with eight-person gondola cabins and will climb 2,000 vertical feet in less than seven minutes—less than half the ride time of the current fixed-grip triple. The resort plans to have the it ready for the winter 2020-21 season. The lift will operate year-round. 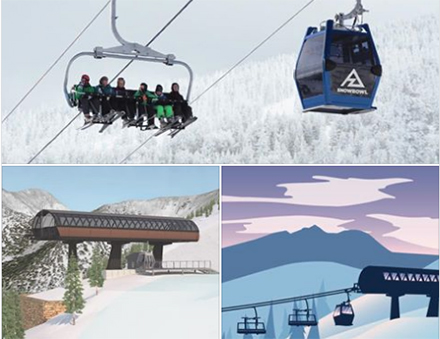 Arizona Snowbowl will be replacing its Agassiz chairlift with a state-of-the-art combination Telemix lift from Leitner-Poma.

According to Arizona Snowbowl general manager JR Murray, the resort is buzzing from the announcement. “Ownership is excited, the staff is excited, locals are excited, and passholders are excited,” Murray said. “After riding a 34-year-old slow lift, this machine will take Snowbowl to a new level. And we have been reaching new levels almost every year for the last eight since snowmaking was installed.”

"We are honored to be working with JR and his team again on this new and exciting project for Snowbowl,” said Daren Cole, president of Leitner-Poma. "We had great success with the Grand Canyon Express, and JR and his team are great partners."

The Telemix will be one of only six combination lifts in the country, and the first in Arizona. With gondola cabins between every two chairs, it breaks the mold for existing combination lifts, which typically have a gondola cabin every four or five chairs. Carriers will be spaced in such a way that the uphill capacity will remain at the current 1,200 passengers per hour so as not to overcrowd the terrain off the summit.

In addition to being a major upgrade for winter uphill transport, the new lift will be an attraction for scenic rides up to 11,500 feet in the non-winter months as well. According to Murray, Snowbowl has operated scenic chairlift rides for more than 40 years, and the new lift will enhance this aspect of the resort’s offseason business.

“The lift provides for amazing views up to 80 miles including the Grand Canyon and red rocks of Sedona,” Murray said. “The new lift will greatly assist with easier loading and unloading compared to a fixed grip chairlift. Cabins allow for operating in otherwise nasty weather in the summer—[before] if it was cold and clear or slightly windy no one would ride the open chair. With the new lift we definitely know there will be more demand for scenic rides.”

Murray predicts that the new lift will also be a hit with special events, such as weddings and groups participating in summer activities at the Agassiz base camp. During the summer months, Arizona Snowbowl offers a ropes course, disc golf, tubing, and bungee activities.

Mountain Capital Partners has made substantial capital improvements since it purchased Snowbowl six years ago. This is the fourth new lift built since 2014; Snowbowl also has a new base lodge. Still, the Agassiz Telemix will be the biggest project in resort history, and should be one of the largest lift additions in the country for the year.