SAM Magazine—Lakeshore, Calif., Sept. 10, 2020—Snow may be falling in the Rockies, but wildfires are raging up and down the West Coast. The impacts could be far-reaching for ski resorts touched by the conflagrations. 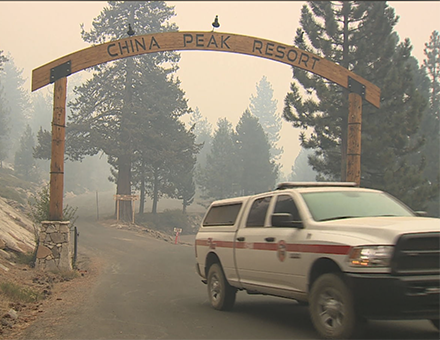 China Peak, Calif., found itself directly threatened by the 167,000-acre-and-growing Creek Fire as it hit the backside of the ski area. On Tuesday, a National Guard helicopter was deployed to airlift 13 people off the mountain. By Wednesday, four employee housing trailers, four personal living trailers, and a number of vehicles had been significantly damaged.

Cal Fire said in a Wednesday report that it was concerned that China Peak’s 1,000 pounds of avalanche control explosives might be threatened. Local reporting suggests that an ordinance disposal team has been called in.

So far, critical buildings, lifts, and China Peak’s new pump house are ash-covered but undamaged. The situation remains in flux, though. “We are still in extreme danger as the fire is zero percent contained,” said owner Tim Cohee. “A wind shift, higher temps, etc., could still cause massive damage.”

On Wednesday, as a precautionary measure, the U.S. Forest Service closed all 18 of California’s national forests. The broad order followed the Labor Day closure of eight national forests in California, including the Sierra National Forest where China Peak operates, due to extreme fire danger.

Inyo National Forest near Mammoth Mountain, northeast of China Peak, was also closed in the Labor Day mandate. Mammoth has temporarily suspended summer operations, shutting down its bike park, via ferrata, scenic gondola rides, and Camp High Sierra. Even so, the resort website notes that many restaurants and activities in town remain open.

Big Bear has also been forced to suspend operations. The El Dorado Fire, ignited by a firework from a gender reveal party, has spread across 12,000 acres of the San Bernardino Forest. So, Big Bear has closed its Snow Summit activities, including the bike park, hiking, and scenic chair rides, for the Sept. 11-13 weekend.

Three separate fires are burning around Oregon’s Mt. Hood. (Firefighters are actively battling 35 fires across Oregon currently.) A forestwide closure was mandated on Tuesday. Timberline Lodge has suspended outdoor operations, although the hotel remains open for current guests and those with existing reservations. Mt. Hood Skibowl shut down operations on Wednesday, with a plan to reevaluate every 24 hours.

Of the three fires, the largest is the Riverside Fire, which is burning across 40,000 acres. The smallest, the Hood Meadows fire, was sparked within the Mt. Hood Meadows ski area boundary on Monday. That fire was contained to just two acres. According to Liftblog, firefighters accessed the blaze via the Stadium Express chair, and controlled the fire before any facilities or lift damage occurred.

Soldier Mountain, Idaho, was not so lucky. As we reported back in August, the Phillips Fire passed directly through the ski area on what was supposed to be the grand opening of the its new bike park. The area's chairlifts remained intact, although the resort was waiting to assess possible damage as the fire burned directly under many of them. The main lodge also survived the blaze, but the bridge that provides the only access to the resort was destroyed, along with snowmaking equipment and a conveyor lift.

Bridger Bowl, Mont., has been threatened but not touched by the Bridger Canyon Fire, even as Bridger Canyon was evacuated. While the fire is not out and closures in the Bridgers remain in place, wet weather is helping firefighters to contain the conflagration.

Fresh snow in New Mexico also helped bring the Medio Fire, near Ski Santa Fe, to 95 percent containment this week. Back in August, shortly after the wildfire started, Ski Santa Fe had moved its snow guns around the ski area to protect facilities and infrastructure in case the blaze hit the resort.