SAM Magazine—Terrebonne, Quebec, Jan. 13, 2022—While Quebec ski areas were able to open and stay open for the 2020-21 winter season, financial results unveiled as part of the “Economic and Financial Study of Quebec Ski Areas” show that several lines of business were down dramatically year-over-year as a result of Covid operating limitations. 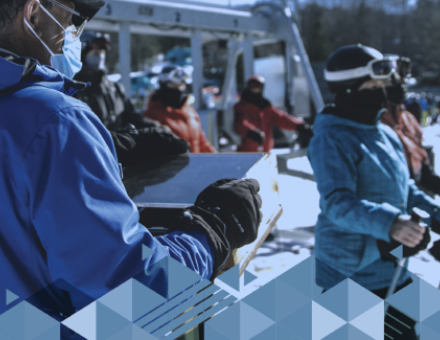 The report also shared some good news, though: Skier visits grew 4.5 percent over the shortened 2019-20 season, to 6.1 million.

The increase in visitation may be attributed in part to season passholders staying local and using their passes more frequently. The total proportion of visitors from outside Quebec fell 46.6 percent in 2020-21. While the total number of passes sold was down 2.4 percent overall, passholders accounted for 3.7 million skier visits—roughly 61 percent of all visits—an 18 percent increase YOY.

The number of day tickets sold was down 11.3 percent due to required 50 percent capacity limitations across Quebec. Those limitations led to ski areas selling out several times during the winter: 34 ski resorts sold out an average of 16 days. But increased yield—the average price of an adult weekend lift ticket was up 13.7 percent—put day ticket and season pass revenue in the plus column, up 1.9 percent YOY.

Other lines of business didn’t fare so well. Forty-five percent of services (bar and restaurant, ski school, etc.) were closed or had operating limitations during the season. As a result, “other” winter revenue (i.e., not lift tickets or season passes) was down a whopping 52 percent.

"These drops in revenue, in addition to the $5 million spent on implementing various measures to adapt to the health context, such as signage, manpower, personal protective equipment, setting up online sales systems, etc., ultimately affected the results of the last season," said Quebec Ski Areas Association president and CEO Yves Juneau.

The loss of revenue from required limitations and facility closures was partially offset by the introduction of government subsidies and financial assistance, such as the Canada Emergency Wage Subsidy (CEWS). The 2020-21 season therefore ended with better-than-expected results, with 95 percent of private ski areas generating a profit when Covid subsidies are included. Adjusted to exclude the subsidies, that number drops to 85 percent.

The decrease in revenues slowed the deployment of new infrastructure projects. Prior to the pandemic, the Quebec ski industry was on an investment roll as evidenced by the 2018-19 and 2019-20 season reports, with $78 million and $55.7 million in investments, respectively. The dollars invested in improvements last season dropped to $22 million.

Beyond the numbers, the president of the Quebec Ski Areas Association board of directors and president of Mont Sutton, Jean-Michel Ryan, said he is proud to have succeeded in getting through the last season in a difficult operating context, but especially happy to have allowed the Quebec population to take to the ski slopes throughout the winter and to have provided a dose of happiness to snowsports fans.

"We are grateful to Ministers Caroline Proulx and Isabelle Charest, who ensured that the ski areas were able to operate in a safe environment for customers and staff, with precise and well-respected sanitary measures," said Ryan.