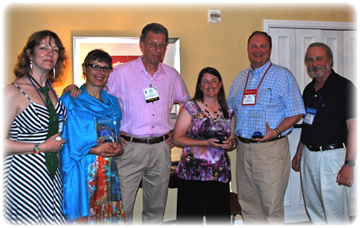 Tracy joined Snowshoe Mountain' s resort team in 2001, but had been involved with introducing youth to the mountain several years prior. As an extension field faculty agent for West Virginia University, she was stationed in the Snowshoe area and worked with the local 4-H youth program. One of her initiatives was to introduce local kids to the sport of skiing. Tracy's first official Snowshoe role was outdoor adventure manager. From there, she very quickly worked her way up to become the resort's human resources training and development manager in 2003.

Since 2006, Tracy has led the HR team in successfully improving employee satisfaction and engagement. She and her team have decreased the area's dependency on international workers by 75 percent, established a three-year competitive wage program, and implemented a drug-free workplace program that has served as a model for surrounding businesses.

In 2008, Tracy and her team established the Snowshoe Career Center. The center provides a place for Snowshoe employees, their family members and potential employees to take college classes and computer application classes and apply for unemployment services.

“Tracy is one of our most talented middle managers and candidly has the skill set and personality to one day lead a ski resort,” claimed on of her bosses.

Dave grew up in Ticonderoga, New York, skiing Gore Mountain and Whiteface. He began working at Stratton Mountain in 1986 as a lift attendant and by 1987 he had worked his way to become Stratton's guest service supervisor. In 1990, Dave was recognized as employee of the year and in 1993 he was promoted to general sales manager overseeing all non-real estate sales.

Dave moved to Colorado in 1997 after Intrawest purchased Stratton and worked as Copper Mountain's consumer sales manager. In 2002, he became the director of national business development for Intrawest Colorado and received the Chuck Lewis Award in 2002 at Copper Mountain.

In 2005, Dave returned to Vermont to accept the position of VP of sales, marketing and reservations for Killington Resort and Pico Mountain where he remained until 2008 when he was appointed president and GM of Mt. Bachelor.

During his down time, Dave is an avid skier, snowboarder, golfer, camper and boater and enjoys his free time with his wife Gillian and daughters Blake and Paget.

“Dave has redefined the ski area's relationship with our small community [Bend, Oregon] and created a great sense of pride in Mt. Bachelor,”says one nominator.

Julie has been involved in mountain resort marketing since she joined Northstar-at-Tahoe's marketing team in 1982 as the public relations assistant. She quickly moved up the ladder and served as marketing director for five years. She was later promoted to corporate marketing director for Fibreboard Resort Group when the company purchased sister resorts Sierra-at-Tahoe and Big Bear Mountain. In 1996, Booth Creek Resorts acquired the resorts from Fibreboard Corporation, and Julie was named VP of sales and marketing. Today, she oversees all sales and marketing efforts for Booth Creek's four resorts—Northstar-at-Tahoe and Sierra-at-Tahoe in California, and Waterville Valley and Cranmore Mountain in New Hampshire.

“Julie is one of the best marketers our industry has ever seen and has done a phenomenal job promoting our sport,” says a nominator.