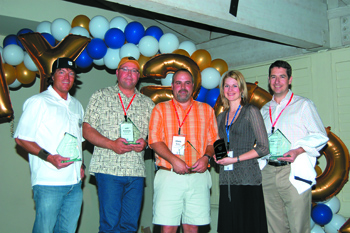 Chris is a Vail guy through and through. Having grown up skiing on its slopes, it was fitting that he would set his professional stakes with the company. Chris graduated from the University of Colorado with a degree in tourism management and marketing. Wasting no time, he quickly landed an internship in the advertising department. From there, Chris rose quickly through the ranks going from director of advertising and direct marketing to director of reservations and VP of marketing for Vail and Beaver Creek.

It's no wonder that one of his nominators said, “Chris has taken on a steady progression of responsibilities and has delivered solid results at every juncture.” Another nominator said, “Chris's passion for skiing, our guests, and the community is reflected in the commitment and professionalism he has exhibited in every situation or challenge that has defined his career.

Chris shares this honor with his wife and three kids.

Jeff's first recollection of working in the industry was for the resort formerly known as Nordic Valley when he was 12 years old. As a kid, he was known for helping out when he could. If the lift operators needed a break, Jeff would bump chairs in exchange for a hamburger or soda. In 1977, his relationship with the area was formalized and he worked there for 11 years. From 1989 to 1995, Jeff joined Deer Valley resort. In 2004, Jeff returned to his first love when he was consulted by the folks who had just bought Nordic Valley. Jeff jumped at the chance to help the new owners resurrect this small community area, and Wolf Mountain was born.

Jeff updated all the chairlifts and the grooming vehicles, expanded the snowmaking system and added a terrain park. In fact, Jeff's wife, Murceel, says that from September until April, all Jeff can think about is his “mountain.” Whether he needs to be at the hill or not, Jeff shows up to work every day between 2 a.m. and 3 a.m.

As one nominator put it, “Jeff brought his heart, soul and talent to a ski mountain that was on the brink of death.” Another nominator concurred saying, “His team has continued to shine this season and the new Wolf Mountain has become a favorite family destination in northern Utah.

Chris began skiing at Great Gorge ski area, N.J., in 1972 and was hooked from the start. His first industry job was in the rental shop at Hidden Valley, N.J. From there, Chris worked his way around every department including ski school, lift operations, lift maintenance and snowmaking. In 1992, Chris was promoted to mountain manager.

In 1999, Chris accepted a position at Cataloochee Ski Area as assistant ski area manager. By 2005, he was promoted to mountain manager. By 2006, Chris was making national news when his ski area was the first to open in the Mid-Atlantic and Southeast.

Chris's understanding of operations and marketing and how the two can combine for great success is his strong suit. Through snowmaking automation, Cataloochee's operating days have gone from an average of 84 to 121, culminating in two record seasons is a row. Chris didn't stop there. He also improved grooming, enlarged and updated the rental shops and expanded the lift system, making Cataloochee's clients the ultimate winners.

One nominator described Chris as the “little train that could...Chris understands the value of earned media and creating a buzz about winter fun.” Another nominator said, “His enthusiasm for the snowsports industry and his belief in the sport and our customers is contagious and motivating.”

This year's recipient is Bob Holme. Bob is in charge of Winter Park's five top-10 North American ranked terrain parks. Bob was one of the key people behind the Ruby Hill Rail Yard, a free urban terrain park located in an inner city park in Denver. One nominator said of Bob's efforts, “He was able to rally everyone, right on up to the Mayor of Denver, to get behind the project and by overcoming all obstacles, he completed the project in under seven months (unheard of when working with the government).”

In the first month of operation, the park hosted 3,500 inner-city kids and gave them a taste of the mountains in the most unlikely of places. Through tenacity and can-do spirit, Bob has made it possible to reach out to a community, revitalize a tired park and give kids a great recreational option. It helps that another nominator said, “All the kids love him to death.