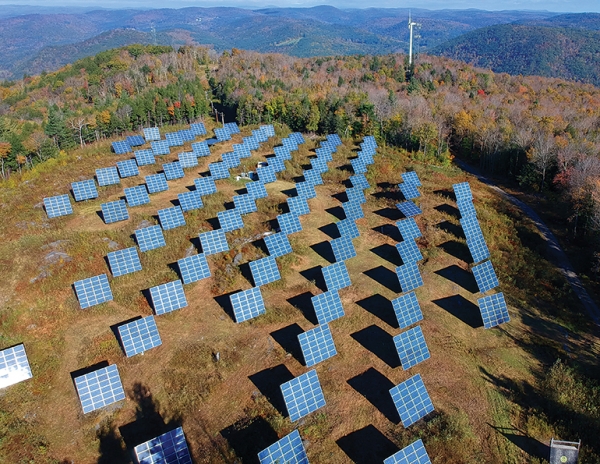 Berkshire East Mountain Resort, Mass., may become the first ski area in North America, and perhaps the world, to be powered 100 percent by carbon-free electricity generated on-site. It’s most of the way to this goal already, and working to complete it.

First came a 277-foot tall, 900-kilowatt wind turbine commissioned in 2011. In 2012 came a 10-acre solar field, capable of generating a maximum of 500 kilowatts. The 2.3 million kilowatt-hours produced annually by the turbine and panels exceed Berkshire East consumption. The excess power does not generate income, but it does dramatically reduce peak demand charges. 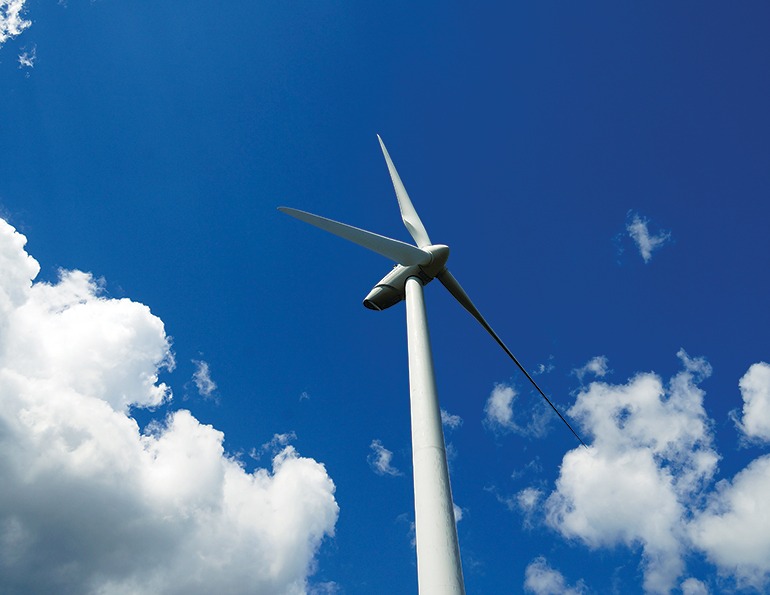 The solar field is especially notable. To economize use of space, 90 AllEarth Solar Tracker poles hold a total of 1,800 panels—up to 24 panels each—that all follow the sun, producing 35-to 45-percent more electricity than fixed panels. The installation is a model of efficiency.Both projects were seeded by government grants. For the wind turbine, $486,000 came from the Massachusetts Clean Energy Center, and a federal grant brought $989,000. Total project cost was $2.9 million. For the solar field, a 30 percent federal investment tax credit along with state grants helped defray the $2.8 million cost.

The Rewards of Efficiency
The grants, along with reduced energy bills, recouped the costs of these two projects within five years. Too, the guaranteed rates of local renewable generation provide a hedge for the 30-year-or-more project lives of the wind and solar infrastructure. These new, local sources of electricity displaced the grid-delivered electricity produced by coal, hydro, and natural gas.

GM Jon Schaefer has been working on energy storage, too. The concept is called “reverse demand response.” He’s trying to leverage the assets of his ski hill into an old-school pumped hydro project. Pumping water uphill to on-mountain snowmaking reservoirs when electricity is cheap, then allowing it to rush downhill to generate electricity when it’s needed and rates are high, would further help Berkshire’s finances. Pump-storage hydro would further reduce the area’s peak demands on the electrical grid, such as when snowmaking guns are running in the fall. (See “The Power of Water,” SAM July 2018, for more.)

With pumped storage, Berkshire East would remain connected to the electric grid but become more self-sufficient.

Behind the Moves
This determined push into renewable energy has several drivers.

1. Pure business. “I’m not a big green-washer,” Jon says. “We’re doing these things because they make good economic sense for our business.”

Taking advantage of federal and state incentives when they were high has also made renewables a good business decision. “I think we hit the window perfectly,” he says.

2. Risks posed by climate change also have motivated this work. Berkshire wants to reduce its role in producing greenhouse emissions by lessening the burning of fossil fuels. Schaefer hopes his area’s experience inspires customers and others.

3. Self-sufficiency, the third motivation, can be traced to resort patriarch Roy Schaefer, father to Jon and his three siblings. Roy grew up on a farm in central Michigan and learned to ski when a neighboring farmer created a rope tow using a diesel engine. From that humble start, Roy became a certified professional ski instructor, one of the first, and traveled the world. Always hands-on, he worked the controls of backhoes to build the Lansing Ski Club in Michigan.

Family Business
Moving to the Berkshires in 1975, Roy Schaefer and other investors from Michigan bought the ski area in 1977. Over time, he built up the resort, but rarely with new factory-fresh infrastructure. He famously shopped for seconds, buying equipment from Berthoud Pass in Colorado, Sierra Ski Ranch in California, and Ski Rio in New Mexico. About 40 pieces of equipment have come from other ski areas. (Roy, who will turn 80 this summer, still works daily at Berkshire East.)

This thrift served the ski area well, says Jim Schaefer, another son and now the co-owner of Berkshire East with Roy. “You really can’t overstate the importance of my father’s conservative investment strategy,” he said in a 2010 interview with a local newspaper, the Valley Advocate. “We could have invested millions in upgrades in the 1970s only to lose the mountain in the ’80s.”

It was Jim who had the vision for Berkshire to reinvent its energy system. His thinking was motivated by personal misfortune—a fourth motivation for the change.

Family Tragedy
A captain of the University of Vermont’s 1990 NCAA championship ski team, Jim became an investment banker on Wall Street. In 1999, he and his wife, Elissa Anne Henderson, headed up Berkshire East after closing day in April. At the top, 1,180 feet above the base area, she suffered an asthma attack and died.

The Franklin County coroner’s report cited poor air quality, the result of both a high pollen count and pollution blown in from big coal-fired power plants to the west, as a contributing factor in her death.

That altered Jim’s outlook. “In a really harsh, direct way, air pollution took someone I love,” he told the local newspaper in 2010. “I couldn’t just keep doing what I was doing. I needed to try to make a difference.”

On Wall Street, Jim shifted his work to energy, renewables in particular. He did the same at Berkshire East.

“He has an idea of where the markets are going, and I am the guy who can pull it off,” says brother Jon.

Partnership with the State
Massachusetts has been a key partner with Berkshire East in this energy transition. Two laws adopted in 2008 got the state moving. One, the Global Warming Solutions Act, mandates an 80 percent reduction in greenhouse gas emissions below 1990 levels by 2050.

Many metrics point to success. The American Council for an Energy Efficient Economy has ranked Massachusetts as No. 1 in the nation for eight consecutive years. Solar capacity has grown from a trifling amount a decade ago to 5 percent of total production today, say state officials. (Keep in mind that this isn’t the Mojave Desert.) With expansion of off-shore wind and other renewables, state officials say Massachusetts will meet 50 percent or more of its electrical needs with renewable energy by 2030.

Berkshire East has become a symbol of the state’s efforts. In February, Gov. Charlie Baker, a Republican, cited the resort at a hearing about climate change in the U.S. House of Representatives—the first such hearing in eight years in that body, according to a release issued by his office. “The magnitude of the impacts from climate change requires all of us—at the federal, state, and local levels—to put politics aside and work together,” he told members of the House Natural Resources Committee.

And More: Energy Storage ...
Energy storage has been targeted by a state law adopted in 2018. The Act to Advance Clean Energy sets a target of achieving 1,000 megawatts of energy storage by 2025. It also incentivizes use of clean energy during times of peak demand. The Schaefers hope to realize state aid to achieve the pump-storage hydro project that would help achieve those goals.
Most pump-storage hydro is done on a large, utility scale, with hundreds of millions of megawatts. At Berkshire East, though, the Schaefers are thinking much smaller scale, 6 to 10 megawatts.

“Pumped storage is essentially a big battery. It uses a lot of our infrastructure and complements the snowmaking,” says Jon. But unlike batteries, the storage technology uses water. “You can drink it. It won’t catch fire. It might evaporate, but it’s utterly renewable. There’s no mining. It won’t degrade with use. That’s what is important about micro-pumped storage.”

... And Biofuels
Biofuels are also in Berkshire East’s renewable energy queue. The resort uses two wood boilers as the energy source for forced-air heat at the base lodge and other buildings, burning wood gathered from the resort’s property.

The Commonwealth encourages biofuels with a nuanced approach. Mike Judge, director of renewable and alternative energy, says the state has some of the strictest rules in the world for biomass facilities seeking financial incentives. Rules require sustainable forestry practices for biofuels. Greenhouse gas emissions must actually be reduced when compared to conventional sources of energy generation.

Year-Round Transformation
In addition to its deliberate efforts to stabilize costs with local renewable energy, Berkshire East has expanded into summer operations to increase and diversify revenues. In 2011, the same year it added the solar panels, it installed a canopy tour. Two years later it added a mountain bike park, and in 2014 it added a mountain coaster. It also purchased a whitewater rafting company. Summer now produces 60 percent of revenues.

Together, renewable energy and summer attractions make Berkshire East a more resilient resort. What was once merely a ski area is now a year-round resort and energy station.
“Our view is that we have to evolve or die,” says Jon Schaefer.