With a bold announcement last week, Vail gifted the ski industry an opportunity to broadly correct lift ticket pricing problems that have been building for many years, and to more quickly leap toward becoming wholly e-commerce/pre-sale businesses. 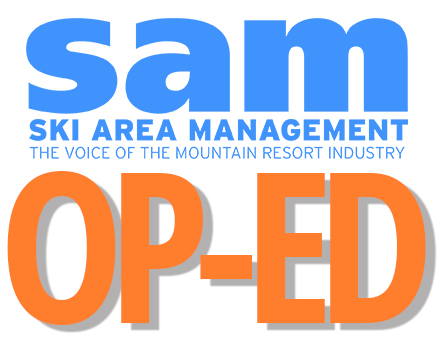 While the announcement of “Epic for Everyone” paints a picture of some legitimately improved buying experiences for consumers, what Vail really announced was an adjustment toward more pre-sale via advance-purchase discounted lift tickets, adjacent to previously raised window rates.

Over the past 10 years, the ski industry has been in an arms race for pre-sale—first with season passes for individual resorts and then with multi-resort passes like Epic, Ikon, Peak Pass, Mountain Collective, etc. Quietly alongside, many within the industry have taken great strides to focus similarly on pre-sales of traditional lift tickets. As measured by walkup rates, the industry has seen dramatic increases in the cost of skiing (a topic I covered last spring at the National Ski Areas Association conference), with the average window rate for ski tickets rising from ~$57 when Liftopia was founded in 2005 to somewhere near $110 (expected) in 2018-19. 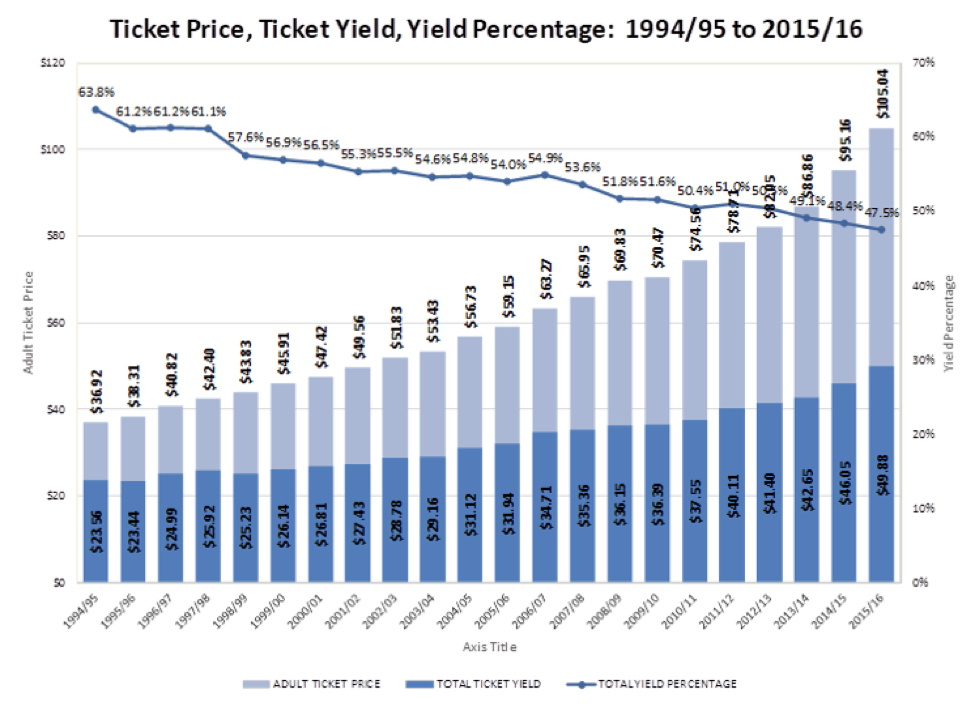 Now, the industry would rationally respond that walkup rates are not an accurate measure of how much it costs to ski, as there is often cost savings in “per-day discounting” in the pass products mentioned above as well as through the various dynamic pricing strategies (that our company advocates) used by the majority of ski areas. That said, the focus on pre-sale of pass products since the “season pass wars” started in Colorado in the ‘90s has yielded a troubling pattern in the cost of entry to our sport and the scale of our customer base that preceded Vail’s correction earlier this week.

As pass visits increased as a percentage of overall skier visits, a dramatic negative impact on yield (average ticket price) and yield ratios emerged—a cause of concern for ski areas big and small, but particularly for those who disproportionately skew in the direction of season pass visitation. This, along with the goal of increasing season pass sales, meant ski areas continuously raised their window rates to recover some of the missing yield. Unfortunately, this meant that the cost of entry to our sport (again, as measured by window rates, and typically the driver of new-entrant perception of cost) rose substantially, and further drove resorts to “cater to the core” skier and to the hyper-competitive pass market that exists today. The increased variability of conditions/weather driven by climate change further impacted consumer confidence and pricing power. 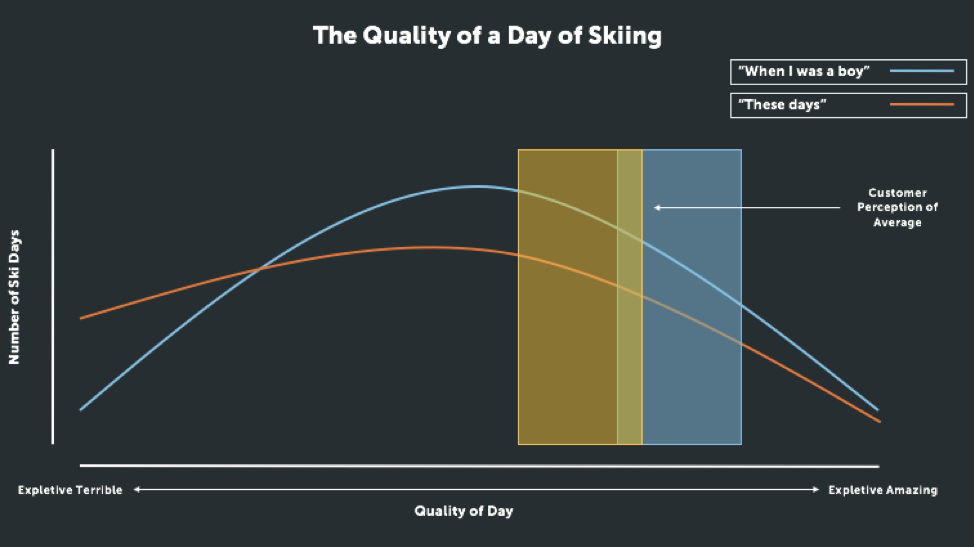 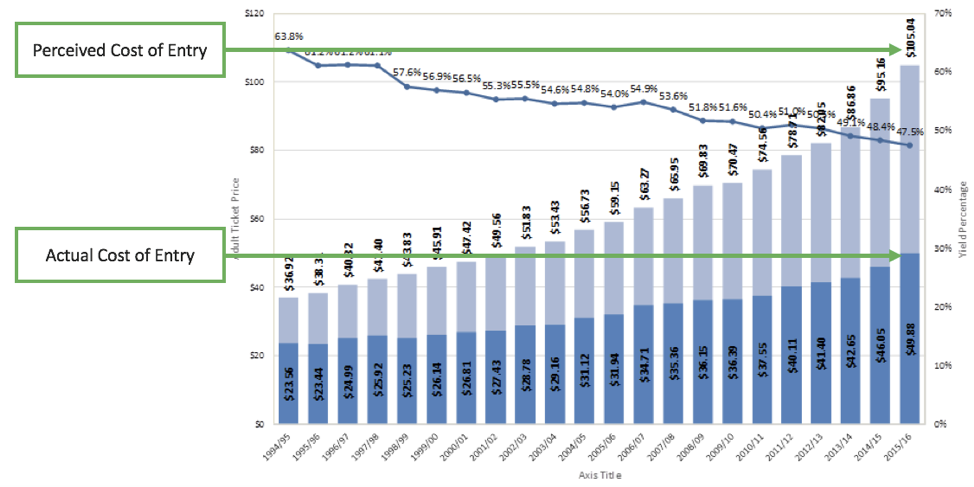 Along the way, something else interesting was happening—Vail’s portfolio and high quality execution gave it the ability to focus on Epic Pass sales, and it did so utilizing ever increasing window rates (typically at the top of the market, with Christmas week exceeding $200 in many of its destinations this winter). Vail ruthlessly focused on driving pre-sale, primarily of its pass products, but also of day passes. While day tickets have been priced at a discount to walkup, the price points remained (from my perspective) unnaturally high in an effort to further support core Epic Pass sales. For a long time the company continued to see tremendous growth with that side of its business (not to mention all of the ancillary thereafter), but this shift toward day passes suggests a slowing pace of traditional Epic Pass sales growth alongside an intention to move all transactions in advance of arrival. 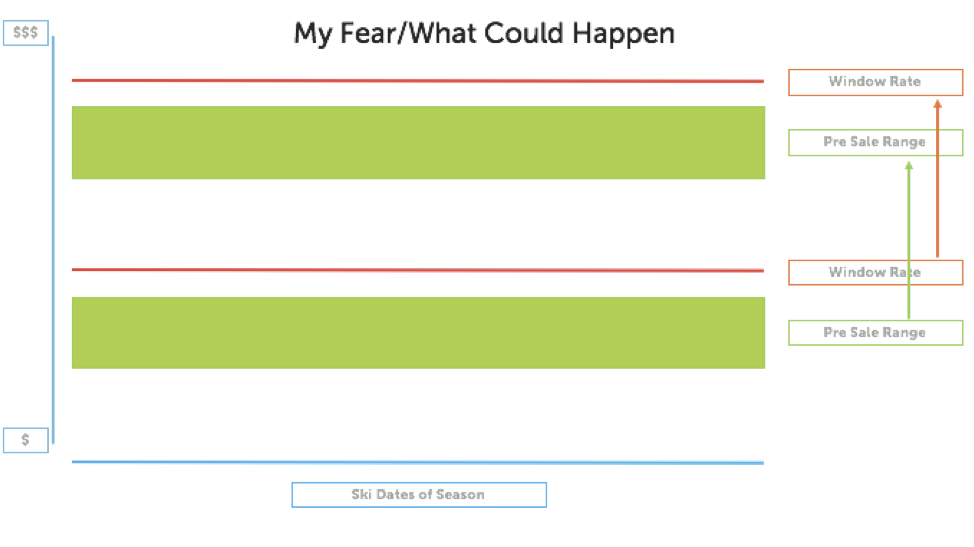 Source: Liftopia Arrival Day Presentation, NSAA National Show, May 2018 - Illustration of advancing window and pre-sale rates that has slowed the offline to online shift of ski ticketing. As window rates have increased, so have the advanced-sale prices. A greater differential between window and advanced purchase prices would likely drive an increase in online, advance purchases.

Along the way, Vail’s price leadership not only supported its own yield/revenue growth, but empowered what I believe to be an unhealthy focus on unending yield growth within the rest of the industry, further contributing to the narrowing of the North American skier audience.

While that yield growth came alongside a meaningful shift from offline to online sales, the unnatural elevation of the pre-sale price points has kept the industry from moving as hastily as it could from being offline to wholly online businesses (something critically important in an industry with tremendous fixed demand variability – that is holiday to non-holiday, and tremendous variable demand – that is weather and hangovers). 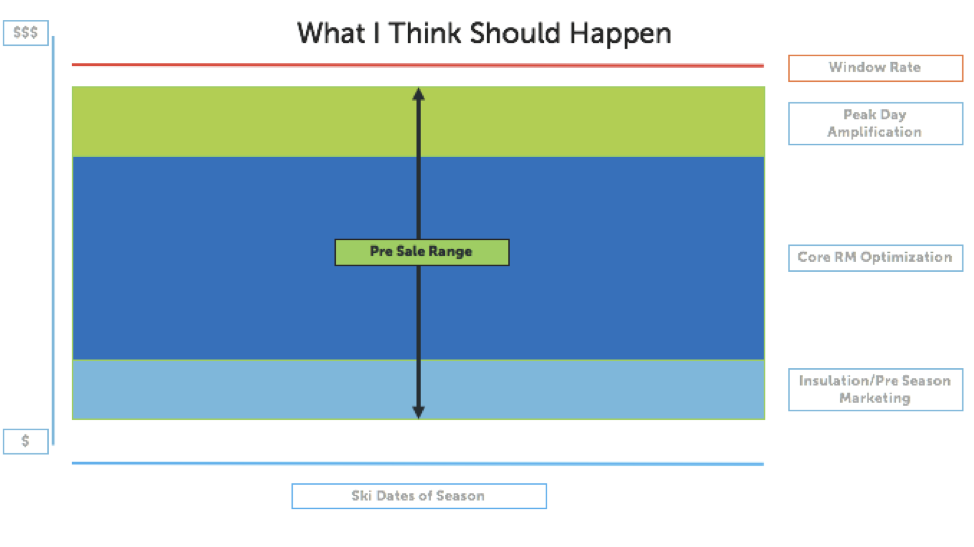 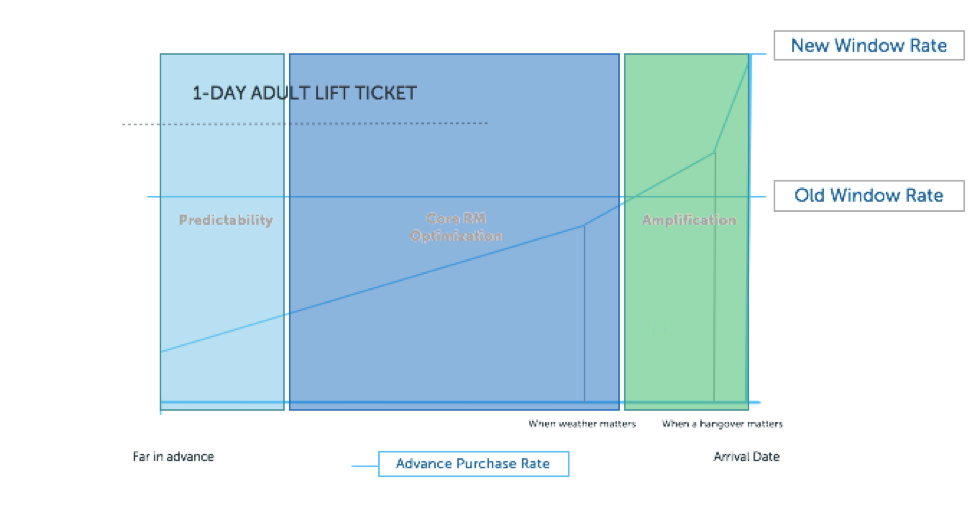 With Epic for Everyone, Vail made a massive correction to its lift ticket pricing that is likely to have very positive long term impacts to the broader industry, even if greeted by short-term grimaces around price optics among resorts that have yet to fully embrace pre-sale strategies. The move will serve to shed a light on the delicate balance between yield and volume, if at first in a broad stroke move as the one announced this week.

Vail is a smart operator, so we should be careful not to judge this movement too quickly. First, it is clear that the messaging Vail’s providing is closely tied to the Epic brand. But what is likely happening here is the following:

One, a simple message to consumers (though it will be interesting to see if infrequents care about the brand itself vs. just using “discount lift tickets”). Two, and perhaps more important, a quick test of the bottom of the market in order to iterate upwards thereafter. Remember, “Epic for Everyone” is essentially an “anytime” discounted lift ticket, as opposed to a date-specific strategy that would provide a more granular revenue management opportunity.

Vail likely was starting to see the inevitable end to its season pass growth strategy, but alongside that, Vail has been testing the top of the market for a while with its existing pre-sale day ticket strategy. Now it needs to test a floor: the bottom of the market. Then, the company can iterate up from there, as it has done with the Epic Pass itself.

One thing we’ve learned about price sensitivity for unconstrained inventory sets, those of ski areas and amusement parks, is that customers who buy in advance disproportionately punish overpricing. That is, consumers don’t bite if the advance price is too high, and the thing they are buying never sells out.Starting with a dramatic price move, as Vail has, will give them a clearer signal that would not appear if they made only slight movement downward.

By taking this action after every major holiday period this season has already passed, Vail is able to test a low price floor with less risk, not to mention gaining a lot of press during a critical pass-sale time of year. I anticipate seeing more iteration as the summer progresses, both with these anytime lift tickets and (my prediction) a more granularly revenue-managed, date-specific ticket strategy alongside.

Now, I am certainly wrong in some of my assumptions here. They are crafted only by my observation of Vail’s execution, and what I believe is the “right” thing for it and the rest of the industry to do. Last year at the NSAA convention, I said resorts should be careful to not move up pre-sale prices in lockstep with increases to window rates. But that has largely happened. Vail’s move is one major correction that is likely to ensure that does not continue moving forward. With this move, Vail has afforded the industry the precipitating event with which to regain ownership of cost messaging to consumers. Now, the industry needs to follow up with meaningful, rational pricing responses that customers will find persuasive enough to buy well in advance.