SAM Magazine—Greenville, Maine, March 7, 2022—A Superior Court Justice ordered James Confalone and his company Moosehead Mountain Resort Inc., owner of Big Moose Mountain ski area, a.k.a. Big Squaw Mountain, in Greenville, to deposit $3,831,000 into an escrow account because he failed to maintain the ski area that he purchased in 1995. 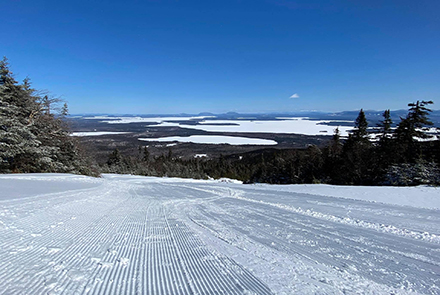 Big Moose Mountain in December of 2021, courtesy of The Friends of the Mountain He and his company will also have to post a $500,000 performance bond.

The decision concludes a protracted legal battle that began in 2016, when the state of Maine filed a lawsuit against Confalone alleging that he and his company failed to “invest in and improve the ski area and resort, and maintain and operate it as an attractive and safe resort for the benefit of the people of Maine and the Greenville community.”

The lawsuit also alleged that Confalone illegally harvested timber on 169 acres of the property in 2010 and 2011 to pay interest on more than $4 million in loans he had secured using the property as collateral.

Superior Court Justice William Stokes ruled in favor of the state in November 2020, ordering Confalone to repair and restore the ski mountain, lifts, and other resort property to the condition they were in before he purchased the property. He was also ordered to pay significant fines for the illegal timber harvest. The amount Confalone and Moosehead Mountain Resort Inc., was ordered to pay was determined following a damages hearing in December 2021.

Confalone purchased Big Squaw Mountain, as it was known at the time, in 1995 for $550,000 “with the explicit understanding” that he and his company would invest in improvements to the resort and provide the public with access to its trails and lifts.

Confalone failed to make improvements and perform basic maintenance to the resort’s infrastructure while operating the ski area. The hotel and base lodge deteriorated to the point that they had to close in 2001. The chairlift serving the summit of the ski area failed in 2004, injuring four people. The lift hasn’t operated since.

The rest of the ski area remained open until it fell into further disrepair and Confalone shut it down in 2010. In 2013, a local not-for-profit called Friends of Squaw Mountain leased the lower chairlift, trails, and base lodge from Confalone for $1 a year. According to The Bangor Daily News, the organization cleared and groomed 15 trials, fixed up the lodge facility, repaired the lower lift so that it has passed inspection, and offers skiing and snowboarding lessons.

The $3.8 million to be deposited in the escrow account will be used to pay for repairs to the resort.

“We are pleased with the Superior Court’s decision, which we believe fairly and reasonably addresses the state’s claims regarding this treasured resource and will further the public’s use of the ski area,” said Maine attorney general Aaron Frey.

While the court decided Confalone is on the hook for repairs to the ski area, a Maine developer has bigger plans. Perry Williams of Big Lake Development LLC, has been trying to purchase the property and turn it into a $113.5 million four-season resort. Williams filed an application in March 2021 for a permit to develop phase one of the project, which calls for a new six-passenger chairlift, base lodge, 60-room hotel, a brew pub, and more. Phase two calls for a marina and residential units to be built.

A public hearing is to be held regarding the proposed resort. Williams reportedly has a purchase and sale agreement in place with Confalone.