SAM Magazine—Vail, Colo., May 4, 2022—The Vail town council voted 4-3 on Tuesday to begin possible condemnation proceedings on a 23-acre parcel of Vail Resorts-owned land in East Vail, citing concerns over the wellbeing of a herd of bighorn sheep in the adjacent natural preservation. 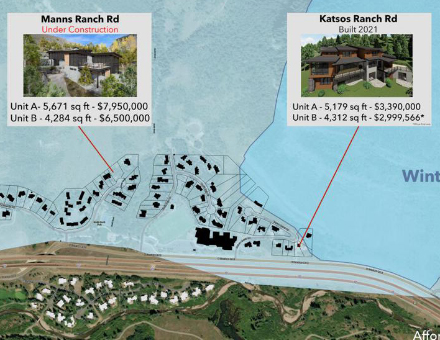 The land was selected in 2019 as an approved site for a $17 million affordable housing development to house 165 employees. Vail Resorts had pledged an additional $100,000 for habitat improvement aimed at preserving the herd of bighorn sheep, which uses part of that parcel for critical winter range at times.

According to a May 3 article in the Vail Daily, council chambers at Vail Town Hall were overflowing Tuesday with concerned residents, largely made up of Vail employees and executives. Supporters for the project noted that a number of multi-million-dollar homes, Vail Mountain School, and Vail’s public works campus all reside within the animals’ winter range. Other proponents cited that the town had already approved the project on the site in question. Opponents say the habitat must be preserved entirely because the sheep can’t go anywhere else.

In a statement, Vail executive VP Bill Rock described the actions of the town council as a complete reversal of their actions of just two years ago when they partnered with Vail Resorts to defend the 2019 approval in court. Rock expressed concerns that other recent developments in the immediate area conflict with the town council’s sentiment toward the Vail parcel.

“The Town of Vail has not attempted to block any of the new home construction, or condemn any of the more than 100 luxury homes, in the same sheep habitat,” argued Rock. “Instead, the Town of Vail has only singled out land approved for affordable housing for condemnation. The action of the Town Council today is unprecedented in Colorado. It is unprecedented for a municipality to use the power of eminent domain to block affordable housing.” Rock more recently added, “We will vigorously defend our right to go forward with this project.”

In a tweet from Vail Mountain last night, council member Davis was quoted as saying, “Condemnation is a last resort, an extreme action…Condemnation will further divide our community…Frustration is not enough of a reason to give up fighting for the best solution.”

“Condemnation is a last resort, an extreme action... Condemnation will further divide our community... Frustration is not enough of a reason to give up fighting for the best solution.” Town Council Member Barry Davis

The actions, or lack thereof, of Vail Resorts leading up to this vote appear to have not been well received by the council. According to a report from the Colorado Sun, following three hours of testimony, “all of the council members lambasted Vail Resorts for difficult negotiations in recent years as the town pushed the company to pursue different locations for housing in the valley,” the report said.

“We have tried to collaborate with Vail Resorts for the last two years. It’s been a very dismal process,” said councilwoman Jen Mason. “I do not want to condemn this land but for two years they would not even respond to us.”

More than 100 emailed statements from local business owners and residents were included in the council’s meeting packet, with around 80 of them urging council members not to condemn the project and about 20 opposing the development.

The Colorado Sun noted West Vail resident and business owner Robyn Smith presented a map she put together of the already expansive development in the bighorn sheep habitat. She said condemning the affordable housing project while allowing all the other activity is a “textbook example of redlining.”

Biologist Melanie Woolever, who was one of two biologists to study the heard in 2019, argued that the area Vail Resorts wants to develop is part of the only remaining winter range for the sheep. She asserts that the money Vail is committing to habitat improvement elsewhere won’t solve the issue.

Mariane Batchelder, a biologist speaking on Vail Resorts’ behalf, is in support of the company’s mitigation efforts, and said the plan for habitat improvement far outweighs the hazards of development, as outlined in the Vail Daily article.

Councilmember Mason, who has admitted in the past that she feels the town’s values are not in alignment with those of the resort company, recognized that Vail is in a “terrible” housing crisis right now but was optimistic the town and Vail Resorts would find eventual agreeance that avoids an expensive, time-consuming condemnation process through the “good faith” negotiation period called for in the resolution.

Vail Mountain does have sights set on future development at a parcel known as Ever Vail, located in the valley, and many residents are urging the company to shift its focus there. That development, however, wouldn’t solve the immediate housing problem because it’s still three to five years away from approval.

Vail Resorts VP of hospitality John Dawsey noted that the East Vail development and Ever Vail are both essential to solving the housing crisis, but immediate action is necessary. “And we need this housing now,” said Dawsey. “One gets us housing now and one will get us housing in the future, and we need both.”