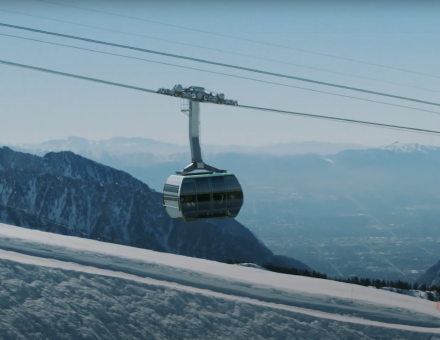 UDOT recommended the $550-million gondola in August after several years of technical analysis and environmental review, citing it as the best solution to traffic that, in the winter, can stretch for miles.

If approved, it would feature a central station along SR 21 at the base of the canyon, a 2,500-space parking lot, and an eight-mile gondola ride, the longest in the world. It could transport 35 people up Little Cottonwood—and directly to Alta and Snowbird—every two minutes.

City officials unanimously condemned the proposal, with mayor Erin Mendenhall citing “a lack of thorough review for environmental impacts,” specifically the negative effects on a vital watershed that supplies water to more than 450,000 residents, reported the Salt Lake Tribune.

Others expressed concern about scope creep for the more than half-billion-dollar project and said it would only remove an estimated 30 percent of traffic, would only benefit two privately-owned ski resorts, would have limited flexibility as a fixed infrastructure, and would require 22 “high-rise-hotel-sized towers” in the recreational canyon.

Still, only one decision last week was unanimous, with the county narrowly passing its resolution in a 5-4 vote following a contentious public comment period.

Other groups still aren’t sure. Prior to the vote, officials from the City of Sandy, off SR 210 at the canyon’s base, had urged the county not to condemn the gondola yet, asking they give UDOT the time to complete their work “unimpeded by political messaging.”

The City of Cottonwood Heights, another base-area community, is expected to vote unanimously against the gondola option in its next meeting, mayor Mike Weichers told the Deseret News.

Meanwhile, both Alta and Snowbird are included in a group, Gondola Works, that backs the project.

UDOT is hoping to “make the most informed selection possible” by seeking input via a 45-day public comment period, which will close on Oct. 17, after which a final recommendation will be issued no later than early 2023. Nearly 14,000 public comments about the project have been registered.

The gondola was one of two options pitched by UDOT to address traffic. The other was to increase bus service, which would include widening the canyon road and installing a dedicated bus lane.

A November 2021 poll by the Deseret News indicated that locals oppose the gondola at a rate of 3:1, supporting an extended bus system as their first choice for traffic mitigation.

UDOT has made other recent provisions to improve traffic, including enhancing bus service, building snow sheds for avalanche mitigation, and making parking improvements.

Other solutions may be available. One dissenting county council member, for example, provided a list of alternate, lower-cost solutions including electric buses, tolls, parking management strategies such as ski parking reservations and enhanced smartphone app technology, and rideshare programs.

Though the county’s resolution has little sway over the project, wrote the Deseret News, some council members on Tuesday said it sends a cautionary message to state lawmakers, who could ultimately decide whether to fund the gondola. SAM is following this developing story.