SAM Magazine—Dresser, Wis., Oct. 19, 2022—Wisconsin’s Trollhaugen Recreation Area has joined the early-opening game as the third ski area to open for the season, and the first to offer chairlift served skiing and riding. 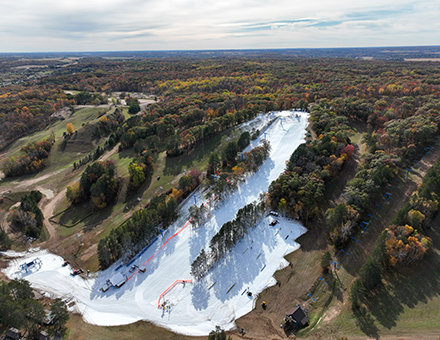 Photo courtesy of Matthew Zabransky The area opened today, Oct. 19, and is operating from 2 p.m. to 8 p.m. with future operating dates and hours to be decided.
“A mid-October opening is not out of the ordinary, but to be able to provide such high-quality snow this early is something that can’t be passed up,” said the resort in an announcement.

Unusually cold temperatures in the Midwest allowed Trollhaugen to make snow for three nights prior to opening.

Two runs are open served by one chairlift and one surface lift: Nissebakken off of Chair 2; and Tomtebakken Park via one of the area's rope tows. Preseason conditions are present, the resort cautioned. Tickets are $20, with a limited quantity available.

Matthew Zabransky of Midwestskiers.com has been closely following the Midwest’s early-season success. “For those keeping track at home, the Midwest now has the first three resorts open in North America,” he tweeted today.

Wild Mountain and Andes Tower Hills in Minnesota opened midday yesterday. Wild plans to be open daily as long as its snow holds on. Andes Tower Hills did not reopen today after the earliest day-one in the ski area’s history.