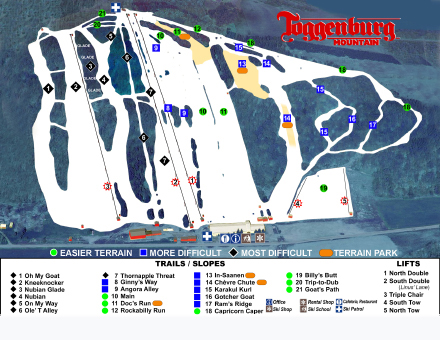 James claims that Intermountain bought Toggenburg in August 2021 with the explicit intent to shutter the business and eliminate it as a competitor of the company’s other two properties, Song Mountain and Labrador. The lawsuit, filed last week, finds the acquisition and other dealings related to it to be “unlawful and monopolistic business practices.”

The lawsuit asserts that the acquisition itself was a “clear violation of New York’s antitrust law, the Donnelly Act,” which “prohibits price fixing, bid rigging, territorial and customer allocations, monopolization, boycotts, and tying arrangements, among other practices,” according to the AG’s website.

Song, Labrador, and Toggenburg are located within a 12-mile radius of each other, and all serve the Syracuse market.

The AG found that the effort to divert former Toggenburg passholders to a buy pass for Song and Labrador worked, “as many Toggenburg season pass holders switched to Intermountain’s season pass” for the 2021-22 season. The AG argues that this significantly harms competition and consumers.

In an effort to reintroduce competition to the market, the lawsuit seeks to require Intermountain to sell one of the three properties.

Intermountain’s Peter Harris acquired Toggenburg from John and Christine Meier, who own Greek Peak ski area, located about 33 miles south of Toggenburg. Harris first tried to purchase the ski area in 2015, ultimately losing out to the Meiers and then partner Marc Stemerman, who bought Toggenburg for $1.25 million to gain a share of the Syracuse market. The Meiers reportedly refused several attempts by Harris to buy the ski area in the following years, until they reached an agreement in 2021.

“Intermountain tried to freeze out competitors to increase its profits and dominate the region’s ski market. Today we are taking action to end these illegal arrangements and protect workers, skiers, and consumers,” said James. “Monopolies are not a game. They harm consumers, drive up prices, and limit workers’ opportunities. Intermountain’s greedy behavior left skiers out in the cold all so they could line their own pockets and be on top of the ski market. Illegal and unfair practices by businesses big and small will not be tolerated by my office.”

In response to the lawsuit, Harris defended his actions.

“We have been committed to providing Central New York with the best skiing and snowboarding value possible for more than 20 years,” Harris told syracuse.com | The Post-Standard. “Through the purchase of Toggenburg, we sought to combine and upgrade ski facility assets to help ensure a long-term, sustainable combination of high-quality skiing and snowboarding in the region.”

Despite Intermountain’s closure of Toggenburg, which was reportedly a profitable business, Harris asserted: “Skiers who formerly traveled to Toggenburg now have access to a broader array of better-equipped facilities and amenities which can be sustained and supported,” according to the syracuse.com | The Post-Standard report.