SAM Magazine—Natick, Mass., Jan. 6, 2023—Rollercoaster weather across the country, from recording breaking snowfall in California to 60-degree temps in Vermont, presented operational challenges for mountain resorts across the country. 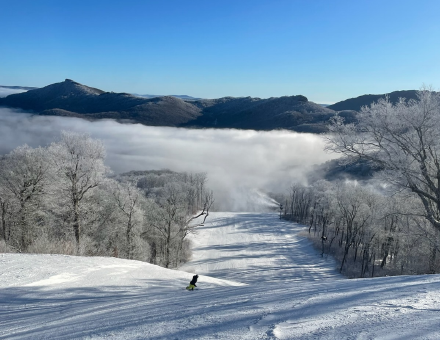 Courtesy of Sugar Mountain Despite some operational disruptions, though, many operators are reporting strong, and in some cases historic, demand.

Consistent and abundant snowfall has hammered the West in the early season, sparking tremendous enthusiasm and strong visitation over the holiday period.

In Tahoe, “We’ve had early and consistent snowfall that supported our season starting a week ahead of schedule and a full month ahead of the 2021-22 season,” said Northstar California GM Amy Ohran.

As a result, Northstar had a “very strong” holiday, with strong demand in all ancillary lines of business, particularly in ski and ride school, she said. Generally speaking, Ohran said leaders throughout California have shared that they are seeing a full return of families that declined in participation during the first two seasons of the pandemic.

“The positive outcome of the holiday is a result of multiple, compounding tailwinds,” she added, noting that consistent snowfall had created “excitement, confidence and demand.” The resort entered the holiday with 100 percent of its terrain and lifts open. Plus, the resort is well-staffed, “allowing us to fully operate in our base area, village and mountain.”

All that snow comes with some operational difficulties, including a storm on New Year’s Eve that made it difficult for Northstar to open on Jan. 1, but the resort was able to return to 100 percent operations on Jan. 2 for the end of the holiday period.

At neighboring Sugar Bowl, weather patterns heavily influenced holiday visitation. Business was 10 percent up on forecast expectations and well up year-over-year heading into Christmas Day, however, “The week following Christmas was a real struggle with weather, including a significant rain event on the December 30,” said CEO and president Bridget Legnavsky. Winter conditions and more snow returned after the rain. The heavy snowfall impacted visitation, though.

“The one or two days that we got some reprieve from the storms we had very strong visitation, but otherwise it was only for the enthusiastic storm riders. So, now we have dropped slightly behind expectations, but we know that the great snow accumulation is setting us up for a really strong season and a lot of hype,” said Legnavsky.

The school holiday break schedule has spread the holiday period across several weeks, leading to continued business post-holiday week. As far as ancillary’s go: a new tubing operation at the resort was a hit over the holidays, with several sell out sessions; hotel occupancy was up; and F&B sales were also strong.

Christmas and New Year’s Day both falling on a weekend played a role in visitation numbers over the holiday period (Dec. 19 - Jan. 1) at Schweitzer, Idaho. Visitation was lighter than expected the first week due to two days of subzero temps followed by freezing fog and rain, but more than two feet of snow the following week made for “significant pickup after Christmas,” said marketing and communications manager Taylor Prather. “Year over year, revenue was up over 20 percent during the two-week period, and we managed to hit our three biggest grossing revenue days in resort history during the three final days of 2022.”

For Powderhorn, Colo., business was steady and strong over the holiday period, which was effectively stretched across three weeks thanks to the school break schedule. The resort was up 6 percent in visits and about 9 percent in revenue as compared to the same dates last year. “We also had a new high-water-mark visitation day on Dec. 29, which added about 7 percent to the peak day we have on record,” said GM Ryan Schramm.

Weather helped, said Schramm, noting the resort has seen four feet of snow over the past nine days. That snowfall is similar to last year’s holiday accumulation, but the resort entered the holiday with a much deeper base than last year.

Eldora, Colo., GM Brent Tregaskis said the resort has been lucky: “It’s good to have a base area at 9,200 feet—no rain and good snow and not too much of it!” The resort was at full capacity going into the holiday and ended up 46 percent up on skier visits and 53 percent up in revenue compared to last season. “All profit centers have done better than last year,” said Tregaskis.

Only one wind hold effected the upper mountain during the main holiday week, an improvement over 2021 when the resort had to shut down completely on Dec. 30. This year, said Tregaskis, “we had a great day on the 30th.”

In Wisconsin, overall visitation was up 5 percent and revenue was up 10 percent from Dec. 26 – Jan. 2 at Little Switzerland, Nordic Mountain, and The Rock Snowpark. “Business was great, despite challenges,” said Rick Schmitz, co-owner of the three properties.

The two main challenges, said Schmitz, were the calendar—Christmas falling on a weekend meant fewer days off for local schools and a shorter holiday week for the resorts—and weather, with blizzard conditions shuttering the properties in the three days leading up to Christmas, and huge temperature swings after Christmas.

“We started on Dec. 26 with below average temps, and toward the end of the week, dealt with temps near 60 degrees with some light rain,” said Schmitz. “In between these weather extremes, Wednesday was the ideal weather day, which ended up being our busiest day ever.”

Overall, said Schmitz, the eight-day stretch was their second-best holiday period on record, behind only the 2020 Covid year.

For the same period, Granite Peak, Wis., beat its five-year average but was slightly down from the 2020-21 and 2021-22 seasons, which represented all-time highs for the resort. Weather extremes likely played a role in visitation, said GM Greg Fisher. Wednesday’s good weather delivered the top day of the holiday period and the biggest single day visitation since the resort implemented RFID tracking in 2018-19.

Night visitation was up, as was season pass visitation, which GM Greg Fisher attributed to changes to the season pass usage tiers.

As that storm front moved further east, it brought heavy rain and high winds that led to pre-holiday operational disruptions at resorts up and down the eastern seaboard. During the holiday period, unseasonably warm temps created spring like conditions across the Northeast.

In western New York the storm wreaked havoc, closing the highways to Holiday Valley from two of its major markets—Buffalo, N.Y., and Ontario, Canada—for four days from Dec. 23-Dec. 27. However, said marketer Jane Eshbaugh, the resort set a visitation record on Wednesday, Dec. 28, with many guests coming from Ohio and Pennsylvania.

The holiday period was generally “very good,” said Eshbaugh, and Canadian visitation, presale passes, and F&B revenue were all up. Generally, Holiday Valley was up 25 percent over its five-year average and 60 percent YOY for the month of December.

“Despite a roller coaster of record lows and highs on the thermometer, Mountain Creek [N.J.] finished holiday week 44 percent ahead of the prior year [in revenue],” said Hugh Reynolds, CMO of the resort’s parent company SNOW Partners. Visitation was also up 30-40 percent for the same period.

High temps and rain saw Mountain Creek (and several others, like Ski Sundown, Conn.) closed Jan. 3-4, right after the holiday, to preserve snow, with normal operations resuming Jan. 5 as cooler weather made its return to the East Coast.

At SNOW Partners’ indoor ski area Big SNOW, N.J., “where weather is less impactful on visitation, we finished 63 percent ahead of our last holiday period (2020-21, we were still closed from the fire at holiday last year),” added Reynolds.

“The season has been wild so far, but for southern New England we’re somewhat used to the erratic weather,” said Jay Dougherty, president and GM of Mount Southington, Conn., where revenues for the week were up about 25 percent YOY without drastic price increases, and children’s program and first timer lesson sales were strong.

Dougherty attributes most of the success to having more terrain open—100 percent of Southington’s 51 acres by Dec. 28—and a strong advertising campaign built around Terrain Based Learning. “Our team put a herculean effort into snowmaking and grooming during the cold snap over Christmas to expand terrain in preparation for the holiday week,” said Dougherty.

“Guests have also seemed to become more weather resilient, meaning they’re showing up on days when 3-4 years ago they wouldn’t,” he added.

As a result, Berkshire East was up 18 percent in visitation over the holiday. “We saw an increase in all areas, led by food and beverage,” said Roberts.

At Catamount, every day of the holiday was strong, leading to a record week, said Roberts. “We saw an increase in all areas, led by food and beverage and snowsports, where our children's day program sold out daily,” she added

“As tough as the weather has been this year—we had a small window of more snowy and decent conditions that landed right in the middle of Christmas week, which was a gift and helped us out a lot,” said Bolton Valley, Vt., president and CEO Lindsay DesLauriers.

As a result, total live revenue for the week was up about 12 percent, ticket sales were up about 15 percent YOY, F&B was up almost 25 percent. Ski school and rentals were also both up significantly, said DesLauriers.

While the mountain is usually at 100 percent capacity for lodging over the Christmas week, DesLauriers added that, surprisingly, lodging was down a bit YOY.

Waterville Valley, N.H., which debuted its new six-passenger Tecumseh Express chairlift earlier in December, was up 8 percent in revenue for the holiday week, said GM Tim Smith, even after the storm dumped four inches of rain on Dec. 23. Ski was up 16 percent and food and beverage increased 12 percent year-over year.

“The F&B team has consolidated operations due to continued staffing hardships, mainly in the kitchens,” said Smith. “However, their ideas for streamlining operations are paying off with increased production and service quality.”

Saddleback, Maine, had a strong holiday week. “Despite some weather challenges just before the holiday, we finished the week 20 percent ahead of last year in skier visits,” said chief revenue officer PJ McSparran. More than 1,000 people attended the resort’s Dec. 29 torchlight parade.

One contributing factor to the success: “We were able to add a lot of team members in the off season, especially in ski school,” said McSparran. “This allowed us to offer season-long programs this winter—which sold us out during most of the holiday week!”

Down south, Sugar Mountain, N.C., was up 22 percent over last season even with “wicked cold temperatures as low as -18 F on Christmas Eve day,” said vice president Kim Jochl. “Good conditions, though. Last season's holiday period weather was warm and conditions were challenging.”

Sugar hosted five live bands throughout the holiday period and a New Year's Eve party and torch light parade, which has been a tradition at Sugar since 1976. New Year's Eve events sold out and the afternoon bands experienced a full house.

So far in this young season, ski areas—and their guests—are showing remarkable resiliency in light of the weather extremes being experienced from coast to coast.