SAM Magazine—Dover, Vt., Nov. 17, 2017—A huge number of mountain resorts across North America—from small ski areas near urban centers to the biggest operations on the continent—have either already 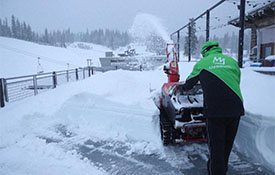 opened or plan to spin lifts by this weekend, marking an early start for most. However, a few operators are still waiting for sustained cold temps and natural snow, forcing them to push back previously announced opening dates.

Excellent snowmaking conditions from Pennsylvania to Maine last week and through last weekend allowed several resorts in the East to open earlier than normal, at least for weekend operations. About 10 ski areas are open for daily operations, including Wachusett Mountain, Mass., and Stowe Mountain Resort, Vt. Jay Peak in Vermont opened today for staff, homeowners, and passholders, and plans to open Saturday for the general public.

The Southeast is still yet to open for the season, but snowmaking has begun at Snowshoe, W.Va. Its website says to look for a Nov. 24 opening at the earliest (snocountry.com says Nov. 22). Beech Mountain in North Carolina is hoping to be open by Nov. 24, and Appalachian Mountain is shooting for Nov. 22.

After a bunch of ski areas opened for last weekend in the Midwest, many that closed for midweek operations plan to re-open on Saturday. Nub’s Nob, Mich., plans to kick off its 60th winter season tomorrow with at least three trails served by two chairlifts.

In the Rockies, only about eight resorts are open for daily operations as of today, most with limited terrain. However, Grand Targhee, Wyo., opened today with a base depth of 56 inches after five inches of fresh overnight brought its snow total to 110 inches already on the year, but it’s unclear how much terrain was available—its website says zero trails are open, and snocountry.com says it’s 100 percent open. Either way, it seems to have quite a bit of snow.

Still waiting on the snow is Eldora, Colo. In an email announcement on Thursday, the resort said its planned opening of today is delayed because “we haven’t had the early snowfall we were hoping for, nor have we had the consistently cold temperatures needed for extensive snowmaking.” The message expressed confidence that the resort will be open by Thanksgiving weekend.

For the 15th consecutive season, Sipapu Ski and Summer Resort plans to be the first resort in New Mexico to open when it kicks things off Saturday.

Some California resorts have been getting a good dose of snow as of late, especially Mammoth Mountain, which is reporting a total of 80 inches at its summit and nearly two feet at the base over the last two days.

Speaking of snow, the Pacific Northwest has been enjoying a stormy pattern this week, allowing several areas in the region to open earlier than anticipated, and some that were already open have been able to add terrain, according to Pacific Northwest Ski Areas Association president John Gifford. Mt. Baker and Timberline Lodge, Ore., are reporting nearly two feet of new snow in the last 48 to 72 hours.

In Canada, resorts in Alberta are still boasting the most open terrain in the nation, with Banff Sunshine, Lake Louise, and Marmot Basin all skiing and riding on 40-plus trails. Whistler Mountain opened today, an early start for the resort, with 600 acres of terrain served by five lifts. Blackcomb plans to open Nov. 23. Sommet Saint Sauveur remains the only ski area open in Quebec.

This report is put together using several online resources—resort websites, news releases, social media, snocountry.com, onthesnow.com, etc.—that, for the most part, have all been equally difficult to trust thus far in the young season. Reports have been notably inconsistent. It’s understandable that new snow reporters are just getting their feet wet, and this time of year is always unsettled in general. However, establish trust in your snow reporting now, and it will carry through with guests for the entire winter. Unreliable and inconsistent reports now only mean you’ll need to work that much harder to earn the trust of potential—and regular—visitors down the road.