Report: Colorado Has a New Ski Area. Or Does It?

What has been billed as “Colorado’s first new ski area in nearly 20 years” looks suspiciously like a backcountry ski guide operation. The “ski area,” Bluebird Backcountry, plans to open approximately 1,500 acres of skiable terrain with 2,200 feet of vertical drop to the general public on Feb. 15. Three hundred acres of this is freely accessible to the general public for a $50 daily rate. The additional terrain will be reserved for guided-only access. 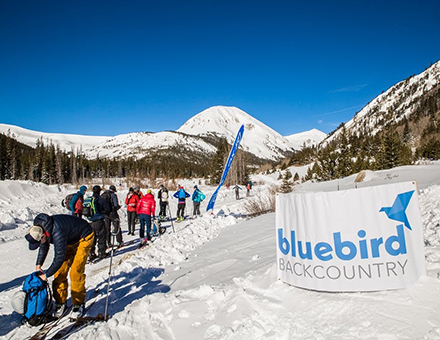 Bluebird Backcountry is 40 miles south of Steamboat, in a remote location on Whitney Peak, a 10,115-foot mountain at the base of Rabbit Ears Pass. The operators are leasing the terrain from a private landowner and will limit skier traffic to a maximum of 300 people per day. The operation may be best understood as a “backcountry lite” concept, focused on entry-level and intermediate off-piste skiers who are looking to ski or ride in a managed, if ungroomed, environment.

Founded by Erik Lambert and Jeff Woodward, Bluebird Backcountry is designed to bridge the gap between traditional ski areas—with lifts, grooming, slopeside accommodations and restaurants—and true backcountry skiing and riding, with its heightened risks of unmanaged terrain. The goal of the operation, they say, is to provide a safe place for skiers to enjoy backcountry terrain and manage the risks involved while also learning and honing essential skills.

The open-to-the public terrain, which features mellow glades and open meadows, will be assessed for avalanche risk and closed when snow conditions are dangerous. Skin tracks will be set for hike-to access to natural snow. Rescue services will be available.

The facilities will be humble. A base-area hut will welcome day trippers and offer backcountry rental gear ($120/day for a full package) and lessons. There will be a warming hut mid-mountain.

Year one, which consists of a 15-day season of selected weekends and holidays running through March 15, is, according to Bluebird’s founders, an experimental season to gauge interest.

Colorado backcountry skiers should be excused for feeling that the folks at Colorado’s newest “ski area” have their work cut out for them. After all, there's a lot of prime—and free—backcountry skiing at hotspots such as Loveland and Berthoud passes. These locations are reachable in only one hour from the greater Denver area, instead of the two hours it takes to reach Bluebird. Can Lambert and Woodward convince skiers to drive an additional hour for fresh turns, particularly when it’s going to put them an additional $50 out of pocket? With Colorado's Front Range population expanding with newcomers, perhaps there are enough backcountry novices to keep Bluebird humming.

SAM is watching developments closely and will report on Bluebird’s progress, along with the questions and opportunities this type of operation raises for more traditional ski areas around the globe.