SAM Magazine— Duluth, Minn., Aug. 12, 2020—Spirit Mountain executive director Brandy Ream and her husband, general manager Jody Ream, have both resigned their positions and will be leaving at the end of August. 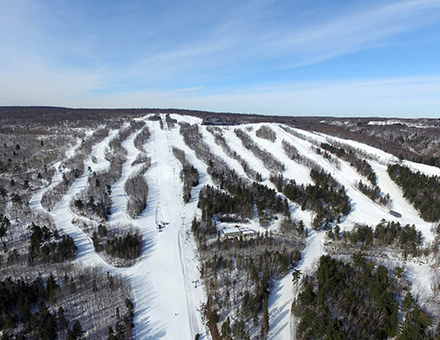 Spirit Mountain is an authority of the City of Duluth, Minn., and the resignations come just ahead of the first meeting of a newly established task force to examine Spirit Mountain’s financial future. The task force will conduct the city's first ever Economic Impact Statement on Spirit Mountain and make recommendations for a more sustainable operation, including the possibility of a sale. The task force is scheduled to deliver its report in February.

Kate Van Daele, communications for Duluth city, said that the resignations took the city by surprise, adding that the Reams’ departure would be a loss for the city and the organization.

Brandy Ream will be replaced as executive director by interim ED Ann Glumac. Glumac was the deputy commissioner of the Minnesota Pollution Control Agency and the Iron Range Resources and Rehabilitation Board, as well as president of the Great Lakes Aquarium. Jody Ream has not yet been replaced.

The Reams have been working with Glumac for the last few weeks to bring her up to speed on the operation and the challenges and opportunities they’ve identified at Spirit. The group will continue to work together until the Reams finish on Aug. 25.

In a short statement, Spirit Mountain board chair Aaron Stolp said: “On behalf of the board, we would like to thank the Reams for their six years of service. We wish them all the best in their future endeavors.

"We are eager to move forward with Ann’s leadership, in addition to the newly appointed task force, and the city to find ways that Spirit Mountain can achieve long-term financial and operational sustainability. We have a lot to be proud of as an organization, and we are excited about the opportunities to come from the next few months."

Spirit faces several challenges. Due to the pandemic, the ski hill has been closed since March, with plans to remain shuttered until the 2020-21 winter season. That has squeezed the resort’s budget. Spirit is typically open during the summer, with revenue-driving activities such as a mountain coaster, Soaring Eagle zip line, scenic chair rides, mountain biking, and more.

Because the ski area is publicly owned, it was ineligible for the Paycheck Protection Program. In addition, the Star Tribune reported that failing to reopen in November would result in $2.6 million in obligations that the mountain wouldn’t be able to pay. It would cost a reported $350,000 to open.

The area’s financial hardships pre-date the pandemic, though. According to Duluth’s annual financial reports, Spirit has seen a steady decline in skier visits, from approximately 150,000 in 2009 to roughly 47,000 in 2018. Last December, the city council approved an emergency $235,000 bailout to keep the ski area operational after a blizzard canceled a tent pole event, the annual Snocross race.

According to local news outlets, Ream reached out to the city in an email following the blizzard, saying, “There has been damage done and I have very low confidence that we are going to rebound from this. Everything good, all the hard work, all the growth in the last 5½ years is being pushed to the wayside. This isn’t right and it’s not fair that we are out here on our own to try to survive this.”

Ream and her husband have led the resort since 2014. In that time, about $1.5 million has been invested in the area to tackle deferred maintenance and make upgrades. The resort is also supported annually with $1.1 million in tourism tax proceeds from the city.

That hasn’t been enough. “There’s so much deferred maintenance, the things that have to get fixed tend to drain down those moneys [sic] right away,” Jane Kaiser, the mountain’s fourth finance manager since Ream took the helm, told local news outlets in March.

The task force, which meets later this month, will consider options to alleviate the resort’s financial stress. “It’s time we take a really deep dive and look at the viability of Spirit Mountain for our community and what that looks like in terms of having the sustainability and resiliency that it needs as a business,” said task force co-chair Janet Kennedy when the task force was formed back in July.