SAM Magazine—Natick, Mass., Feb. 19, 2021—As of Feb. 19, 28 Americans have died in backcountry avalanches this winter, five more than the entire 2019-20 season, according to avalanche.org. Experts say the primary culprit for the uptick is the unstable snowpack in the Rockies, which they call the most hazardous it’s been in a decade. 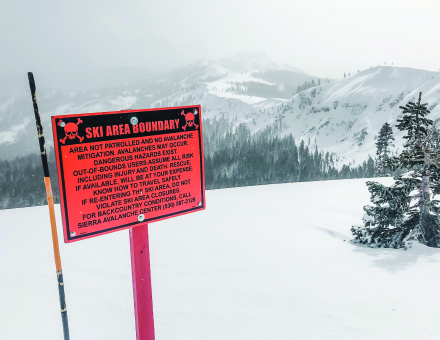 “Basically, we have a very weak layer of snow near the ground which is very reactive. This means it is easy for people to trigger avalanches,” said Colorado Avalanche Information Center (CAIC) director Ethan Greene. “As the winter progresses, the avalanches are getting a little harder to trigger, but you can still trigger them remotely and from low-angle slopes. “They are also breaking much wider than people are used to and crossing terrain features like stands of trees and subridges. The avalanche that killed the snowmobiler on Tuesday [Feb. 16] was close to 3/4 mile wide.”

Reports indicate the victims were prepared with proper avalanche safety gear, and had backcountry experience; the massive influx of new backcountry users has not raised the toll. The math is there, though—put more people in the backcountry, chances of an accident increase. And since the backcountry season can extend well into May, the toll could grow much higher. According to accident data on avalanche.org, roughly 40 percent of all U.S. avalanche fatalities since 2010-11 have occurred from March on.

Backcountry education is essential, for both new and veteran participants, and resorts can play a role. Skilled personnel, a controlled environment, and broad reach on social media put mountain resorts in a terrific position to launch or increase backcountry education programs for this market. As Tom Winter noted in his article “The Big Climb” (SAM, January 2021), the backcountry boom “presents ski areas with an opportunity to enhance and diversify the guest experience—and profit from it."

But creating a profitable program is not the biggest opportunity for ski areas, especially during a winter like this. Most importantly, ski areas can help save lives by preparing new backcountry users through education and training—and it isn’t too late to start doing so.

Greene shared some PSAs that CAIC has put out this year that address why the snowpack is so dangerous this year. He also pointed to a video for “Know Before You Go,” a free avalanche awareness program. He suggested these PSAs and the KBYG video are good content for resorts to share with guests. Check with your state’s avalanche center for local content.

Know Before You Go: https://youtu.be/udBKoWQB3kI