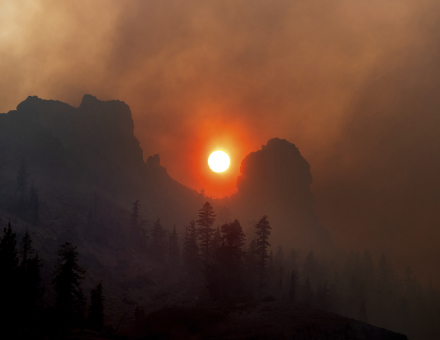 Smoke from the Caldor Fire wafts over a ridgetop near Kirkwood Ski Resort in Eldorado National Forest, Calif., on Tuesday, Aug. 31, 2021. (AP Photo/Noah Berger)Heavenly Ski Resort and Kirkwood are braced as the fire continues to make a run east.

“Heavenly has been running its robust snowmaking system from top to bottom (3,500’ vertical), getting everything as wet as possible,” said Ski California president Michael Reitzel.

The resort’s California Lodge, at the bottom of the Gunbarrel Express chair, is being utilized as a command center, where Heavenly is supporting large firefighting teams, according to Reitzel.

“They are prepared for the worst, but hoping for the best,” he said. “They have a very detailed fire plan and are hoping it yields some positive results.”

To the best of his knowledge, as of Tuesday night, the crews and strike teams deployed in the basin had thus far managed to save all structures in the Christmas Valley, Meyers, and the South Lake Tahoe area.

On the southeast end of the fire, which is driving toward Kirkwood Ski Resort, crews had been making progress with helicopter drops, but smoke in the northeast is impeding air support. In a statement Wednesday afternoon, Kirkwood said spot fires have appeared at the resort and it has its snowmaking system up and running. "We have established fan guns that are spraying critical buildings and lifts, and we have snowmaking hydrants pressurized and ready, with hoses spread out all over the mountain for the firefighters to use," the statement said.

A few miles to the west near Twin Bridges, Sierra-at-Tahoe is still seeing spot fires and is aware of the loss of at least an upper vehicle maintenance shop. A full assessment of damage will not be possible until GM John Rice and his team are able to return to the site.

On the northern edge of the fire, mandatory evacuations are in place all the way up to Tahoma. While Homewood Mountain Resort, in Placer County, is outside of the mandatory zone, the ski area has moved most of its team offsite and closed mountain access.

In response to the wildfire crisis in the state, the USDA Forest Service Pacific Southwest Region has temporarily closed all national forests in California that fall under the Southwest Region’s purview, effective Aug. 30-Sept. 17. Mountain High Resort and Mt. Baldy Resort, which operate within the Angeles National Forest, have closed as a result, as has Mammoth Mountain, which operates within the Inyo National Forest. Other California ski area closure are likely to follow.

In addition to limiting the number of people who could be in harm’s way and decreasing the potential for new fire starts, the Forest Service included the following in its list of factors that led to the decision to close the national forests:

“Although the potential for large fires and risk to life and property is not new, what is different is that we are facing: (a) record level fuel and fire conditions; (b) fire behavior that is beyond the norm of our experience and models such as large, quick runs in the night; (c) significantly limited initial attack resources, suppression resources, and Incident Command Teams to combat new fire starts and new large fires; and (d) no predicted weather relief for an extended period of time into the late fall.”