SAM Magazine—South Lake Tahoe, Calif., Sept. 4, 2021—Aggressive containment efforts over the past 48 hours are preventing the Caldor Fire from advancing on Heavenly, Kirkwood, and the surrounding communities. Despite continued spotting behavior in the northeastern head of the fire, crews are successfully holding the blaze largely within its current footprint. 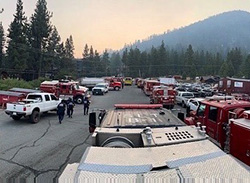 Up to 2,000 firefighters are using Heavenly resort as a base to fight the fire.In a Sept. 3 statement, Kirkwood said, “The Caldor Fire saw very minimal growth near Kirkwood in the last 24 hours, with firefighters making incredible ground in securing the line and preventing it from significant progression uphill.” Overnight helicopter operations, snowmaking infrastructure, and ground crews are assisting in the suppression efforts near the resort. 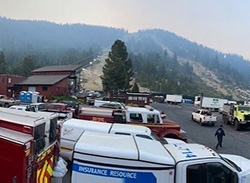 HeavenlyA statement from Heavenly offered a similar report: “As of Sept. 3, the fire line has not changed significantly near Heavenly. Yesterday firefighters were able to stall it out a little over a mile from the resort and have continued to make ground.”

Heavenly’s snowmaking crew has deployed 47 snowmaking guns and utilized 75 hydrant locations to cover areas from the top of the Sky Express down to the operation’s southern perimeter. 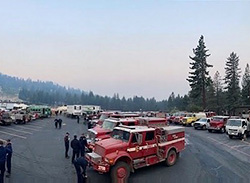 HeavenlyHeavenly is serving as the Eastern Flank Fire Camp for Cal Fire and the U.S. Forest Service fire team, with up to 2,000 firefighters based at the resort. The mountain reports that after a 30-hour fire fight in Christmas Valley earlier in the week, staff at Heavenly opened the resort’s food and beverage warehouse to distribute water, energy drinks, granola bars and other food to firefighters.

At Kirkwood, employees are reportedly working with the sheriff’s office on the ground to install communications infrastructure at the top of the resort to aid responders, with Kirkwood mountain operations staff running chairlifts and equipment to support the operation.

Both resorts are Vail-owned, and the company’s EpicPromise Employee Foundation has been providing food, shelter, and mental health support to impacted employees, with direct grants available to employees under mandatory evacuation. Kirkwood and Heavenly staff in employee housing have been relocated to housing at Tahoe sister resort Northstar.

Today, firefighters in the eastern zone of the blaze plan to take advantage of favorable weather conditions to continue mop up operations and direct firefighting tactics. Structure protection groups also continue to seek out hotspots and mop around structures in areas under mandatory evacuation orders.

The Caldor Fire is currently 214,107 acres, growing only 837 acres overnight, and 37 percent contained.