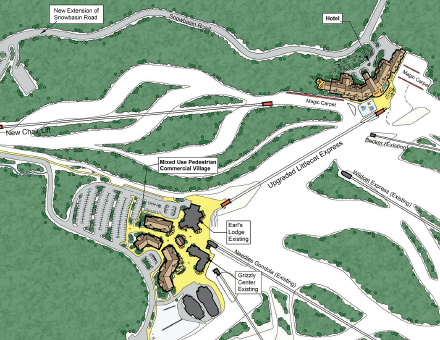 A lift replacement and parking addition are already underway for the 2021-22 season, while a beginner-area terrain and snowmaking expansion, an additional lift upgrade, and construction of the Club Med hotel are expected to be complete for winter 2024. The new village is being developed in coordination with resort developers East West Partners and won’t begin construction until 2025.

The hotel will be Club Med’s first American ski resort location since the group shut the doors on its once popular Copper Mountain, Colo., hotel in the mid 1990s.

Snowbasin general manager Davy Ratchford said the partnership with Club Med will be one that enhances Snowbasin’s business in ways it has been aiming toward for decades.

“They check all our boxes and more,” he said.

Snowbasin, which Ratchford calls the “most successful day area ever with no lodging,” has been looking toward adding base area lodging and a village for some time. “This has been 35 years in the making,” he said. “We are a very thoughtful, careful group.”

The all-inclusive Club Med model was a natural fit, said Ratchford. Since the hotel group sells week-long packages, Club Med guests will not only add to the resort’s bottom line on slower midweek days, but will also, for the most part, not impact the area’s loyal local weekenders.

“It’s really unique in the world of skiing [to have strong midweeks],” he said. “It’s a model we’re excited about.”

Club Med packages also include transfers to and from the airport, so the guests will have no impact on parking or traffic, something that is important to Snowbasin, said Ratchford. The resort is adding 435 parking spaces for this season, with more to come.

That staff will have somewhere to live, as well: Club Med is building employee housing as part of its Snowbasin development plan.

“We’ve really thought this out with a plan to pay homage to the locals,” said Ratchford of the Club Med partnership. “No impact on parking, upgraded lifts, a village, and without adding crowds on weekends. This is what we’ve been working toward.”

Club Med is opening its new Le Massif locale in Quebec this winter, and rumors flew when Club Med first announced its Canadian ski resort plans five years ago that American destinations would come next.

Snowbasin, Ratchford said, made sense as the first U.S. ski area destination because of nearby Salt Lake City’s easy international flight schedule, the resort’s proximity to that airport, and the fact that Club Med will be the only lodging option on the mountain.

Club Med’s core brand, including, first and foremost, a strong level of service, also resonates with Snowbasin. “That’s our brand as well,” Ratchford said, as is Club Med’s commitment to locally sourced food and products and its commitment to sustainability.

While the partnership was just announced, Ratchford said much work has already been done, including the oft-slow-paced entitlement and legal work.