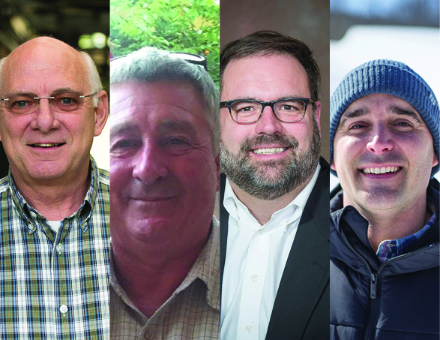 Kelley, McGregor, Keen, ScambioChief operating officer of Eastern operations Rich Kelley is retiring after 44 years in the industry. Other Boyne stalwarts are being moved into place to oversee the substantial capital investments planned across Boyne’s portfolio for the coming years.

Rick Kelley kicked off his retirement from the COO role and active, full-time resort operations Oct. 1, 2021. He will continue to guide the company’s growth as a member of the Boyne Resorts board of directors. His career includes 40 years of service at Loon Mountain Resort, N.H., where he began in 1977 as a snowmaker and worked his way through several roles, becoming the resort’s general manager in 1998. Kelley was selected as COO, Eastern operations in 2017.

Current COO, Western and Gatlinburg operations, John McGregor will transition at the end of the 2021-22 winter season to focus solely on Boyne’s rapidly expanding operations in Tennessee as president of Gatlinburg SkyLift Park. McGregor has been with Boyne Resorts for 44 years. He began at Boyne Highlands Resort, Mich., in 1977, and his career has placed him at the center of some of the most innovative projects in Boyne Resorts’ history.

Brad Keen, Boyne Resorts SVP of food & beverage, has been named chief operating officer of Maine and Michigan resort operations. The role is focused exclusively on oversight of the company’s five full-service, four-season resorts: Sugarloaf and Sunday River, Maine, and Boyne Highlands, Boyne Mountain, and Bay Harbor/Crooked Tree, Mich. Keen’s first role with Boyne was a line cook internship at Boyne Highlands in 1987 while he pursued his degree from the Culinary Institute of America. He grew to become Boyne Highlands GM in 2007 before moving into the SVP position.

President and GM of Loon Mountain Resort, N.H., Jay Scambio has been named chief operating officer, day area operations, for Boyne Resorts. Effective May 1, 2022, Scambio will oversee day area operations at Brighton Resort, Utah; Cypress Mountain, B.C.; Loon Mountain, N.H.; and The Summit at Snoqualmie, Wash. Scambio began at Loon in 1998 as a snowboard instructor and ascended rapidly through the leadership ranks, becoming the terrain park manager in 2002 and then taking on a corporate role to oversee all Boyne terrain parks in 2008. In 2015, Scambio was named director of mountain sports development, adding snowsports schools and adventure activities to his areas of oversight. Scambio then succeeded Rick Kelley as GM of Loon in 2017. His experience will help drive the 10-year capital plans in place for Boyne’s day areas.