SAM Magazine—Wardsboro, Vt., Nov. 17, 2021—A recent spate of mild weather has forced several ski areas from the Northeast to the Rockies to delay their planned opening day until the weather cooperates long enough for snowmaking crews to work their magic. 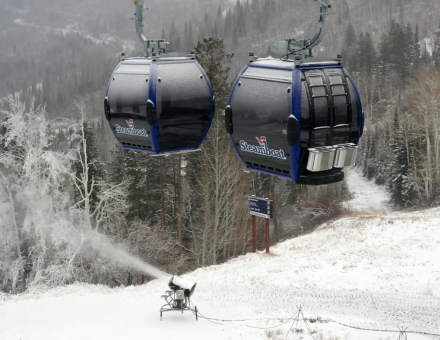 Steamboat released an informative video on Facebook about why they were delaying their opening. Click to view.Cold spells earlier this month allowed many resorts to begin making snow in earnest, but consistent marginal temps have limited production since, and natural snowfall has been fleeting.

In the East, Vail Resorts-owned Stowe Mountain, Okemo, and Mount Snow, Vt., Wildcat, N.H., and Hunter Mountain, N.Y., all planned to open Nov. 19 or Nov. 20. But earlier this week the resorts announced their openings were postponed until further notice. The forecast for the Northeast calls for highs approaching 60 degrees with rain on Thursday, and colder—albeit marginal in many areas—nighttime temperatures to return over the weekend.

Southeastern ski areas, many of which are equipped with remarkably powerful snowmaking systems, typically only need a short window of cold to make enough snow to open. That window opened last weekend for Sugar Mountain, N.C. After just 72 hours of snowmaking, the resort opened Monday, Nov. 15, with four trails. It’s the first and only open resort in the Southeast so far in the young season.

Like other parts of the country, upper portions of the Midwest have experienced some snowmaking windows so far, and cold temps are in the forecast for ski country in Michigan, Minnesota, and Wisconsin, among other areas. Planned early openings are few, though, and some resorts have appeared to have pushed back their opening dates. Lutsen Mountains, Minn., for example, has a published planned opening of Nov. 20 on SnoCountry.com, but its website has Nov. 25 as the target. Perennial early opener Wild Mountain, Minn., opened Nov. 15 for daily operations with two rope tows serving two trails.

In the West, several areas have postponed their opening dates.

Steamboat Ski Resort, Colo., is experiencing an unusually mild and dry fall. Its planned opening has been delayed from this weekend to Nov. 27.

“Anyone who has been in Steamboat, or has been anxiously watching our mountain cameras, knows that Mother Nature hasn’t been cooperating this pre-season,” said Steamboat VP of resort operations Dave Hunter. “Normally this time of year we have more than 20 inches of snowfall that has remained (not melted), a 10- to 20-inch mid-mountain base and 200 hours of snowmaking under our belt.” This year, Hunter said, Steamboat has only had eight hours of snowmaking so far.

Unusually warm temperatures also delayed Arizona Snowbowl’s opening day until further notice. The forecast calls for highs in the low- to mid-40s and lows near 30 at the 10,000-foot level through the rest of the week.

In Utah, Solitude postponed its Nov. 19 opening day due to recent warm temperatures. The resort is “optimistically targeting” Nov. 23 to kick-off the season, conditions permitting.

“With colder temps on the way, we will be making snow at every available window,” said Solitude president and COO Amber Broadaway. “If conditions justify opening earlier than November 23, we will be ready to go.”

Nearby Park City Mountain won’t open as planned on Nov. 19, either. “Due to recent warm temperatures over the last few weeks and upcoming anticipated warm weather, we will be delaying our opening day, which was targeted for Friday, Nov. 19.,” the resort said. A new date has not been targeted yet.

Also in Utah, Brian Head Resort called out Mother Nature for delaying its planned Nov. 19 opening until further notice. “Mother Nature has a dry sense of humor, indeed,” the announcement from the resort begins. “Her lack of snowfall and unusually warm temperatures are delaying the scheduled opening day for Brian Head Resort.”

Brian Head’s announcement included a summary of what much of ski country is experiencing right now: “While every effort has been made and snowmakers have been diligently at work, uncooperative weather momentarily has the upper hand.”

On the other hand, Marmot Basin in Alberta moved its opening up a day, to Nov. 18, thanks to 26 inches of snow in the last five days. Alberta is home to the only open ski areas in Canada as of today, with Lake Louise, Sunshine Village, and Banff Norquay all open daily—and reporting fresh snow, led by Sunshine Village with 41 inches in the past four days.

Ed. Note: It’s early yet, and starts and stops are not unusual this time of year. Also not unusual: ski areas inconsistently updating important channels that consumers rely on for the latest information about opening day. Research for this report found many resorts reporting different information across their websites, SnoCountry.com, and social media.

There will be enough confusion this winter with Covid protocols varying from state to state, county to county, and ski area to ski area. Guests need to know before they go, and that starts with consistent information across widely sourced communication channels about everything from opening day and trail conditions to operational changes and Covid safety.