Stevens Pass is making its mark on the downhill bike park scene after years of brainstorming and research. 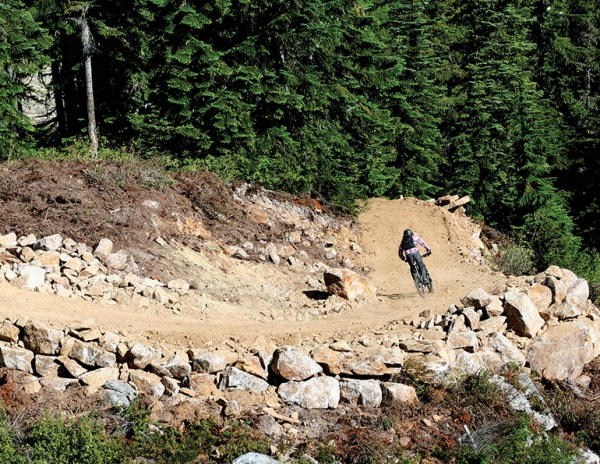 Way back in the summer of 2004, Joel Martinez had a dream. Well, actually it was probably more of a crazy adrenaline-fueled delusion that came on during mud season, but it seemed to make perfect sense to him at the time.

Back then, the director of human services at Stevens Pass, Wash., thought the modest-sized resort 70 miles east of Seattle should boldly invest a chunk of money into building some really tricked-out downhill mountain bike trails. Stevens Pass didn’t offer any mountain biking on its terrain at the time, but Martinez thought it could be a good way for the day-use facility to finally venture into summer operations. And besides, Whistler Blackcomb was doing it with great success.

Not everyone on the staff thought it was such a genius idea, but general manager John Gifford was interested enough to keep the scheme alive. “The idea got some support initially, but I wouldn’t say it was overwhelming,” Martinez recalls with a laugh. “The more I was able to get information to the staff and the board, the more interested they became.”

Fast-forward to 2011. Martinez, 38, is now the operations manager for the resort, and his long-ago dream became a reality last October. With a big help from the guys that got the ball rolling at Whistler Blackcomb, the first portion of the Stevens Pass Bike Park was unveiled to the public for back-to-back weekends of riding in early October. The two new trails (one intermediate, one advanced) earned high praise from more than 900 riders who had long awaited the opening, and gave an inkling that Stevens Pass could have a return on its investment sooner rather than later.

Only two of the five trails planned for the first phase of the park were opened, and neither was entirely complete, but it was still a huge success. Riders from the Seattle metro area and the small communities of Leavenworth and Wenatchee to the east showed up in force despite typically rainy fall weather.

Creating good downhill trails for bikes requires an enormous amount of planning and handwork, which is why experts advise building up a park slowly, year by year. That approach makes it possible to refine and tweak the building process. Here, Mountain Manager Ryan Forbes and his crew help with initial clearing.

“It fully exceeded our expectations,” says Martinez, who joined Stevens Pass 12 years ago as the lift operations manager. “I had no idea how many people were going to show up. It blew me away. You work very hard for a long time and you think you’re doing the right thing, but you don’t really know until everybody shows up, and it was nice to see that we were doing the right thing.”


EVOLUTION OF THE IDEA
An avid mountain biker himself, Martinez became interested in building a bike park after experiencing the fully-developed setup in Whistler. Many ski resorts have had some kind of mountain biking for a long time, but it was at Whistler where the sport progressed from cross-country riding to a gravity-oriented sport that required specific features and functionally-built trails.

To get the ball rolling at Stevens, Martinez went right to the source. He attended the International Mountain Biking Association conference at Whistler in 2006 and took in a presentation about downhill bike park building by Dave Kelly and Tom Prochazka. Kelly and Prochazka were instrumental in conceiving and developing the Whistler park in the mid-1990s and have since taken their expertise into an independent company called Gravity Logic.

By 2007, Stevens Pass had hired Gravity Logic to do a feasibility study and, in 2009, signed them up to start designing the new trails and features. Prochazka oversaw the construction last summer, but the labor was supplied by Stevens’ summer staff and seasonal hires.

“We said from the start we were going to do it right or we weren’t going to do it at all,” Martinez says. “We really liked Whistler’s model and they were the best bike park in the world. Obviously, we’re not Whistler and can’t be Whistler, but we could still build trails correctly and create a place where people really like to ride and keep coming back.”

The initial project cost for the entire build-out of the first phase is about $900,000, spread over four or five years. Stevens Pass only has about 800 vertical feet to work with, based on where its lifts are located, but with Gravity Logic’s expertise, they made the most of their terrain. The intermediate trail will be almost two miles long when completed next year, along with two additional trails, and a fifth one will follow in 2013. The master plan calls for as many as 20 to 22 trails over the next 10 to 15 years.

Opening in October wasn’t ideal, but construction was delayed until August because of the record snowfall the resort received last winter. Next summer, the resort plans to offer food and drink concessions, as well as on-site bike rentals and service, and perhaps a few events. Martinez is confident there will be steady traffic all summer as the resort opens new sections of trails and grows its summer operations. If that means 250 to 1,000 riders on any given weekend day, that will be good for business.


PRE-SOLD CUSTOMERS
To help offset the costs of the initial trail development, Martinez came up with a founder’s club of sorts, called the Drop-In Alliance. The resort sold 200 five-year passes for $1,000 apiece last summer, generating a cool $200,000 in about five weeks. (The resort kept things simple for its inaugural weekends, offering all-day lift tickets for $20, but no rentals or concessions.)

Just as important as the money, the club also created a sounding board of advisors from all walks of life. “It was a great way to get some people who had been supporting us for all of those years to buy in and really feel like they had some ownership in it,” Martinez says. “They’re a dedicated and loyal group. They came up and rode the trails before we opened to the public. We kind of call them our board of directors because they offer so much valuable input.”

Personal experience was also important for top decision-makers. To help convince his bosses to pursue a bike park several years ago, Martinez organized a trip for Stevens Pass general manager John Gifford, a few Stevens board members and other operations staff to visit and experience the Whistler bike park first-hand. He later invited local Forest Service officials to join so they, too, could see what he was talking about. The Forest Service isn’t against mountain biking, but it detests illegally and improperly built trails that lead to erosion, destruction of forests and unsafe conditions.

“That was part of our initial conversation with the Forest Service, and it went a long way,” Martinez says. “We told them this was a way that we could take on that liability and the pressure they were feeling. We knew it would be more sustainable for us to build trails correctly the first time than it is for them to be built renegade-style out in the woods. Until you can have people experience a bike park first-hand, it’s hard for them to understand what you want to build.”

By involving the right designers, decision-makers and end users throughout the process, Stevens avoided an uphill battle to get a downhill park.

Now, Martinez expects the huge mountain bike community in the Puget Sound area will warm to the park as well. “It’s been seven years in the making, but this is what I envisioned all along,” he says.


BUILDING IT RIGHT
When it comes to building bike parks, Dave Kelly is the man. He helped Whistler Blackcomb build its renowned bike park in 1996, and helped create the Gravity Logic mountain bike park design group as an internal business unit at the resort in 2005. Three years ago, Kelly, Tom “Pro” Prochazka and Rob Cocquyt purchased the company from Whistler Blackcomb and have continued building bike parks around North America. Here are his keys for success:

SAM: What is the big challenge of your job?
DK: Every property is different, and the product you can build on that property is unique. Yet we’ve created a bit of a formula that works and is extremely profitable. We modify it for each individual resort that we work with, to accommodate their budget, their terrain and their threshold for risk, etc.

There is a lot of science behind what we do, but there is an equal amount of art and creativity. We apply mathematical equations and formulas and figure out slope angles and pitch and how to achieve the perfect balance between no pedaling and no braking. You can’t just walk through the woods and figure that out. But the creative part and the artistic part are what really separate the good trails from bad trails.

SAM: What’s the first step?
DK: We pretty much insist on doing a site visit and a feasibility study so a resort can know what they’re getting into, if they can do it, how much it might cost, what sort of construction phasing they’re looking at, what sort of return on their investment they’re looking at. We urge getting real information rather than jumping into it blindly.

SAM: What does it cost to build a bike park?
DK: That’s almost impossible to answer. But even for a very small regional bike park, you’re into hundreds of thousands of dollars. At the end of the day, resorts really need to focus on how much they’re going to make on their investment. It might cost a small regional resort $500,000 over five years, but the return on investment can be exponentially greater than that. The focus from the resort needs to be, “How much am I making on that investment?” and not “How much will that investment cost?” Every single one of our clients is making a great return on their investment.

SAM: What’s the time frame to build a park?
DK: We recommend a five-year growth phase. We encourage resorts to invest capital over a period of time and not all at once. Also, growth in visitation is directly related to new trails and maintenance. If you open with 20 trails and don’t expand, people will start looking elsewhere for what’s next. Whereas if you open with five trails, you can say, “Here’s what’s coming next year.” If you can continue to offer new product, you’ll see an increase in visits.

SAM: What’s the biggest misconception about opening a bike park?
DK: That it has to be radical. Local bikers all shout for the same thing, a fast, gnarly downhill race-oriented trail. Every bike park needs those; however, if that’s all you have, you’re never going to realize a profit.

Good bike parks follow the same model as a ski resort: those that make a lot of money and have the most visits usually cater to families, have a lot of intermediate trails, and have great lesson packages. A good park should have something for everyone and be about progression at all levels. Unfortunately, some bike parks cater mostly to experts. They often don’t have rentals or lessons, making it almost impossible for families or beginners.

SAM: Are you amazed at how the bike park phenomenon has grown?
DK: I never envisioned how big it could get. Whistler Blackcomb is at 140,000 summer visits now. The first year we had about 1,500 visits. I wouldn’t have anticipated that kind of growth, but now I firmly believe in the potential for growth in the sport.