The mountain resort industry has seen much over the past 50 years. Here are our picks for 50 moments that led us to where we are today. 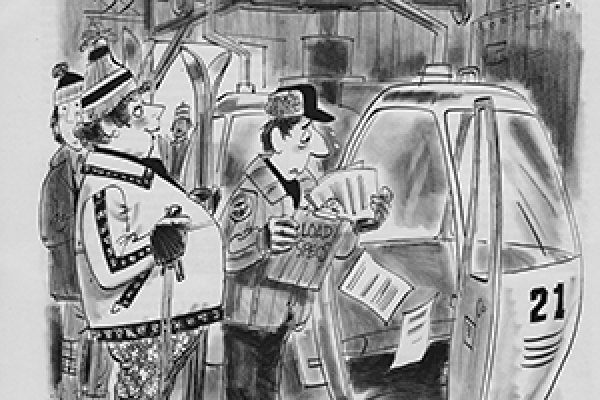 The past 50 years have seen an incredible amount of growth and innovation in the mountain resort world. here, sam attempts to identify the 50 events, people, and inventions that shaped our industry.

sam and nsaa are born
#1 and #2: In 1962, one very significant meeting gave birth to two of the defining moments in our history: The creation of Ski Area Management magazine (SAM) and the National Ski Areas Association (NSAA). Forty-one ski area operators gathered in Colorado Springs, Colo., to solidify the industry. NSAA’s first executive director, David Rowan, also had the foresight to create an independent magazine alongside the new organization toprovide the industry a balanced view of the issues. Many of the defining moments that follow are due to the creation of these two important entities.

#3: One of the main goals in the creation of the NSAA was to address rising insurance costs. In the early 1960s, an insurance program designed specifically for ski areas was created and administered by Lukens, Savage & Washburn. As well, lift inspection began to be formalized.

#4: Vail is born: The first ski-area-as-resort-village is built from the ground up.

#5: In 1963, the first tracked cats came on the scene. Tucker, Oliver, Polaris and Thiokol led the charge.

#6: In 1964, Lange is credited for introducing the first plastic ski boots. In the early 1970s, the Hanson Bros. took it a step further with rear-entry boots.

#9: In 1964, NSAA, under Ann Hasper Rowan, introduced the first uniform trail-marking system. The first stab (shown here) underwent later changes, as we have all seen.

defining skier responsibility
#11: Under Perry Williams, a Skier's Courtesy Code was created by the NSAA Legal Committee for debut in 1966. The code aimed to shift more responsibility onto the skier.

#13: All throughout the 1960s, snowmaking grew by leaps and bounds. Larchmont and Ratnik were two of the major pioneers. Quickly, resorts realized that snowmaking was not a luxury, but a necessity.

#14: GLM: In the Fall 1966 issue of SAM, we reported that "A teaching experience by Ski Magazine leads Killington to adopt the new 'Graduated Length Method.'" Killington's Karl Pfeiffer is credited with the concept that shorter is better when it comes to learning to ski, an idea that would take decades to truly take hold.

#17: Herman K. Dupre at Seven Springs Resort, Pa., created the low-e tower gun, which he continued to fund and develop. This new concept of lowering energy use in snowmaking was a welcome one.

#18: The revolution in ticketing begins. Ticketron first started advertising in SAM with a comprehensive ticketing and data management system. Then along came flexible ticketing, bar codes, magnetic stripes and RFID technologies—all designed to capture data and offer guests many more options. SkiData and Comptrol also led the charge in the following years.

#19: In the face of growing confusion on the state level about who oversees lift safety, the industry proactively created ANSI B77 in order to formalize lift safety and inspections.

#21: The great oil crisis of 1973-74 prompted a hugh challenge for skier visits and forced resorts to improvise and come together. New Hampshire goernor Sherman Adams was integral in helping ski areas get rid of the Sunday gas sales ban.

#22: Ralston-Purina buys Keystone Resort, and later Araphaoe Basin, in Colorado, marking one of the first corporate entities to get into the ski business.

grooming makes a difference
#23: Throughout the 1960s and the early 1970s, grooming was mostly accomplished with tools like the Bradley Packer (pictured here). In 1975, PistenBully and Thiokol both came out with the tiller, which changed the grooming game forever.

#24: The first Alpine Slide is installed at Bromley, Vt., changing the way ski areas did business in the summer. In addition to the Alpine Slide, Spirit Mountain, Minn., installed the Red Rumbler.

#26: In 1977, Jake Burton built his first snowboard, based on the popular Snurfer. Tom Sims followed soon thereafter in 1978. The two companies, from their humble beginnings, would go on to shape the snowboarding—and mountain resort—industry.

#27: Sunday versus Stratton: This landmark case changed the legal scene drastically by shifting some of the “assumed risk” back on resorts. Fearing the end of the inherent risk doctrine in the sport of skiing, the ski industry sought a legislative response; now most states with skiing have statutes on the books.

stretch pants and shaped skis
#29: The rise and fall of stretch pants in skiing. We have placed this in the 1980s, but stretch pants date back to the 1930s and lasted for decades before the baggy look started to take over in the 1990s. Will they be back?

#30: Breckridge Ski Resort in Colorado installs the first high-speed detachable lift. Though, some say the first detachable was installed at Snow Summit, Calif., in 1953.

#32: With real estate starting to become an important part of a resort’s revenue, Phil Gravink at Loon, N.H., was one of the first to introduce the quarter-share concept to make real estate more affordable and to ensure that beds stay warm year-round.

#33: In 1986, Olin brought 150 pairs of shaped skis to the SIA trade show. It wasn’t until 1993 that the first shaped skis hit retail shops. Like the larger racquet in tennis, shaped skis forever changed how our customers could slide.

#34: The creation of the USIA (United Ski Industries Association) between SIA and NSAA and its demise three years later. The ill-fated attempt at consolidating the equipment and the resort sides of the industry left both a little worse for the wear, but not for long. A new NSAA was born and Michael Berry appointed president.

#35: The first conveyor lift was installed at Kinderhut in Breckenridge. The manufacturer was Magic Carpet. The conveyor lift has since delivered millions of beginners (and tubers) up the hill without the spills and thrills of surface lifts.

36: ASTM rental and retail shop practices standards. In 1971, NSAA came out with the Rental Shop Guidelines to address liability concerns. The Guidelines were put together by Carl Ettlinger Gordon Lipe and John Outwater. In 1987-88, the ASTM adopted the guidelines as standards, and improved upon them after much research. The overall results were a significant reduction in lower leg injuries and an estimated $1.6 billion in medical savings.

#38: The era of conglomerates. While multiple area ownership was nothing new, the 1990s saw huge growth, and publicity, in the rise (and fall) of the resort conglomerates. Vail Resorts, Intrawest, American Skiing Company, Booth Creek, Fibreboard, Powdr Corp, Boyne USA, Aspen, and RCR were the major players. During this time, areas were traded like so many baseball cards, and a few ventured into the Big Leagues by going public. As the dust settled in the 2000s, a few were left standing—some stronger, some weaker.

#39: Amesbury Tubing Park opens in Massachusetts, demonstrating that tubing was no longer an afterthought, but a true contributor to the bottom line.

Who Owns What?
#41: Peak Resorts becomes a part of a REIT, a trend that would take hold through the 2000s, when CNL Lifestyle Properties burst on the scene in 2003. These two REITS alone own over 35 ski areas and resort villages as of 2012.

#42: The deaths of Sonny Bono and Michael Kennedy, just one week apart, initiated a huge trend toward helmets. In just 15 years, over 60% of sliders now wear helmets.

#43: In 2000, the Midwest Rental and Accessories Buying Group was born to allow smaller areas a bigger voice when it came to the design and purchase of rental equipment. This group became SARA-BP in 2007 when it invited other regional associations and their members to partner with them in the Ski Area Rentals and Accessories Buying Program.

resorts fly into summer
#44: Mountain operations take to the air. In 2002, Park City, Utah, installed a zipline and its success was immediate. Over the next 10 years, ski areas have not only installed ziplines, but they’ve upped the ante with aerial ropes courses and more.

#45: In 2002, NSAA debuted its Model for Growth, acknowledging that the industry’s customers are aging and the need to attract newcomers to the sport and, more importantly, keep them, is paramount.

#46: In 2007, Jiminy Peak, Mass., installed a wind turbine. While not the first area to address the environment in a substantial way, we use this moment as a symbolic move toward renewable energy by the industry. It is duly noted that Aspen Skiing Company has long set the bar when it comes to environmental stewardship.

#47: In 2009, Learn a Snowsports Month was launched. It was created by the state associations, and Ski Utah's Raelene Davis in particular. Buy-in for the program continues to grow on an industry and state level.

#48: Sidecountry and backcountry become buzzwords. This back-to-nature trend is nothing new—skiing was invented as a way to get around the backcountry by prehistoric Nordic folks, after all. But as guests seek the thrills beyond the gates, ski areas have had to deliver, opening up new questions and problems by being portals to the “outside.”

#49: In 2004, Facebook was launched and the world of marketing changed forever. Social media has altered the way we talk to guests and sell our products. It’s anybody’s guess as to where this will all lead...

#50: SAM goes retro to remind us all about how much—and how very little—can change in 50 years!