It's All a Game

When your dad is a pro event racer and your mom is an event organizer, your birthday parties are bound to rock. 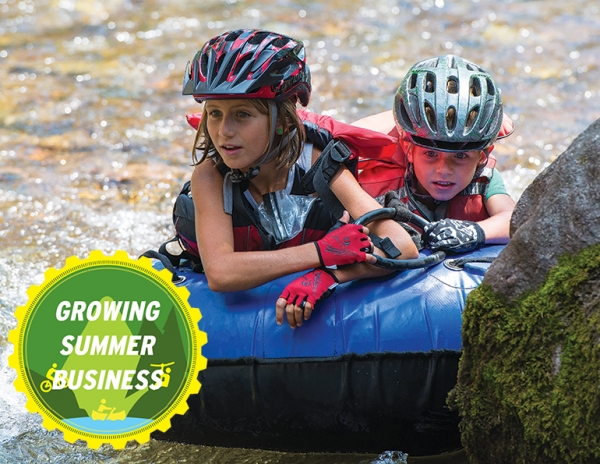 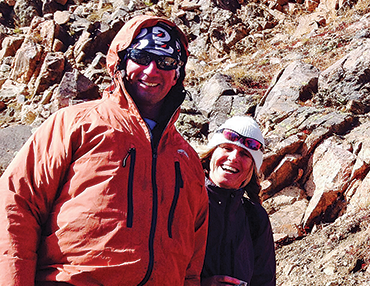 “Billy put up a little zip line between trees in our back yard in Vail,” remembers Helene. “He hooked a backpack on it and we’d send the kids zipping down. He set up a little tree stump crawl, too, and some other things. The kids loved it.”

Each year, it grew. By their fourth birthday, the party course was intricate and long enough to require using a local campground. By kindergarten, it was “a thing” around Vail. Everyone wanted in. 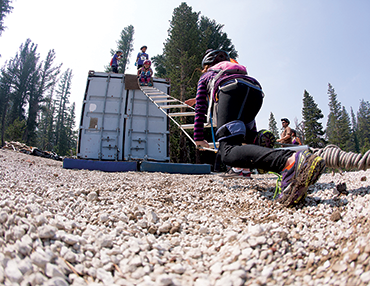 The Adventure Games teaches kids ages 6 to 14 teamwork and self-reliance and is designed to set kids up to succeed. That’s when it dawned on the Mattisons: everyone should get in on this. They reached out to the Vail Recreation District and suggested making it a public event. In 2009, Kids Adventure Games went live there as an invitational, and for the Mattisons, as a pilot for what they suspected could be an amazing national program.

“I invited the kids I knew would be really good at it, along with the ones I knew would cry; to see the range,” she says. “I wanted to see how it worked for all types.”

Based on the numbers, it worked. A year later, they had open registration and the event sold out at 50 teams. Today, it’s a three-day event in Vail that draws more than 1,000 kids. In 2014, it rolled out nationally, with events taking place at resorts in the east and west, and more signing on all the time. Much like the way mud runs and obstacle races for adults took off several years ago, the Adventure Games is booming now.

The event is a perfect tapestry of adventure and learning, brain games and brawn. It teaches kids ages 6 to 14 teamwork and self-reliance. And here’s a doozy: it’s taking a run at helicopter parenting. The layout and plan ensures parents that their kids are safe, but never allows parents to step in and take control. And it works.

“Parents can run along and watch, but they cannot help,” Mattison says. “They can only be cheerleaders, which isn’t always easy for a parent to do. But you know what happens? Despite all the parent’s worry and angst, the kids figure it out and succeed. We pretty much have a 100 percent success rate; it’s designed that way. We set the kids up for success, not failure.”

That means those parents witness their kids in tough and challenging situations, figuring things out on their own. “It can be quite eye opening to many parents,” says Mattison. 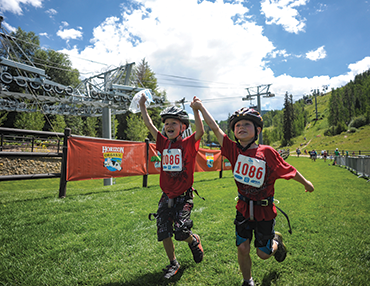 The thrill of victory! Kids are paired in teams of two, often with children they’ve never met before. Programs have a training time, and in some cases, an entire day of training and practice the day before the event. Kids learn the basics of mountain biking, hiking, trail running—all sorts of outdoor activities. Parents can listen in and learn as well. But no one, parents or kids, sees the actual course until race day.

That’s when the kids step up. It can be stressful at first, Mattison admits. “They go through an emotional roller coaster,” she says. “But you know what happens? Those kids just step up. They start helping each other. They start sharing what they know with the ones who don’t know. There are lots of emotions, but in the end, they are so proud they were able to do it. It’s really something to witness.”

Resorts that want to put on a Kids Adventure Games get full support from the company, including help with building the course, staffing, staff training, and seeing it through.

“They’ve done the event for so long, the big ‘misses’ have long been ironed out,” says Andrew Gelinas, director of sports at the Trapp Family Lodge in Vermont. “The Vail event has been their proving ground, so they show up here knowing exactly how to make it happen.”

Trapp Family Lodge debuted its own branded event—The Trapp Family Lodge Kids Adventure Games—after hearing that nearby Stowe Mountain Resort tried to bring it in but had permitting issues. Since Trapp owns its entire 2,500 acres, it was able to bring the event in with little trouble. It’s worth noting that many other resorts in need of permitting have had successful events.

Gelinas says what attracted the Trapp crew to hosting the event was seeing the interest people had in the Stowe event before it got nixed, as well as recognizing the need to push for year-round use of the Lodge’s heavily Nordic ski-based facility. “It’s healthy, it’s fun and it just seemed smart,” he says.

The result? “It is a big win for us. We doubled our participation from year one to year two, and we expect to double it again this year,” he says. “We saw increases in revenues in meals, rooms, foot traffic through our gift shop, and more. I see this happening at Trapp’s for years and years to come.”

At Big Sky, Mont., the Kids Adventure Games were equally successful. That’s remarkable, says Big Sky owner services manager Michelle Fredrick, who helped oversee the event, because unlike some other resorts, Big Sky is “a full hour from our biggest city, and even that city [Bozeman] is not so big.”

Similar to what Trapp Family Lodge experienced, Big Sky saw good interest the first year, and double the participation in year two. Now, going into its third year, the resort is focusing on parlaying the event into additional heads in beds and coaxing folks to spend more time and money in the area.

“We have been a ski area for almost 40 years and we are relatively on the map that way,” says Fredrick. “But summer activities are where we have really looked to increase in the past seven years.” It’s Fredrick’s hope that as this popular kids event grows, those guests will take notice of the resort’s summer operations and think “Big Sky” when planning a summer getaway.

As at Trapp’s, organizers at Big Sky found the team at Kids Adventure Games to be hugely helpful from start to finish. They made holding the event easier and less stressful from the start.

“They bring so much of what you need right along with them,” Fredrick says. “And my advice to resorts starting this? Be sure to ask them questions. They will have the answers. If they don’t, they’ll get them.”

Fredrick is confident the program will grow business at Big Sky overall. But asked what excites her most about it, she gives more of a global answer. 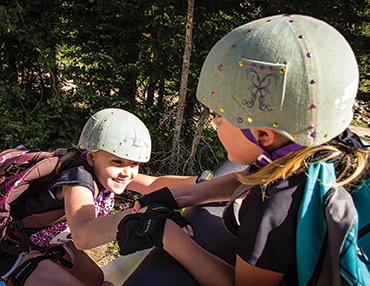 Teamwork is a focus of the Kids Adventure Games, where helping one another out becomes a natural part of the experience.“Seeing those kids out there with this innocence is just incredible,” she says. “They are out there competing, but it’s just a natural part of it for them to starting helping one another out. They reach out and help strangers—strangers they are competing against. That’s just so, so cool. It’s really something to see. You know, the biggest prize of the day goes to the team with the most spirit. That’s a nice lesson for the world, don’t you think?” 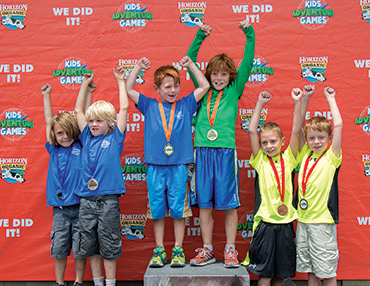 “Ski resorts work well because of the mountain terrain,” says Mattison. “But we’re also looking toward and hearing from some [smaller] resorts that are closer to larger population centers. And you know, the more families we can lure out to see how much fun it is, the more we can bring into this world year round.”

Vail’s event is maxed out; those who want to take part have to sign up early, says Sybil Navis of the Town of Vail. “We’re looking at making the course even bigger, but we have to be careful it flows well. We can’t have folks in town run down by a competition,” she jokes. “But you know, that’s a good problem to have. I would say everyone in this town considers it a rousing success.”

Mattison says that while the races tend to attract the rugged, the clientele is as varied as life is.

“I think that it definitely piques the interest of more adventurous families first,” she says. “But we’re seeing something surprising, too. Take Utah. We’re close to Salt Lake, so we actually drew in some kids who could barely bike. And you know what? They did great. That’s the thing: we just want to get them outside, show them how to have fun, and set them loose on this. And it’s working. We see it every time. It’s just great.”