When it comes to ticket scams, most resorts have seen it all. Scammers have long taken numerous routes to avoid paying full price—or pay anything at all—to ski or snowboard. Resold tickets, split tickets, dates whited out, child tickets on adults, borrowed season passes, Photoshopped passes, counterfeit tickets, skiers hiking past scanners at the bottom to ski the upper lifts, or just “sliding on by” without a ticket hoping they will not get caught. 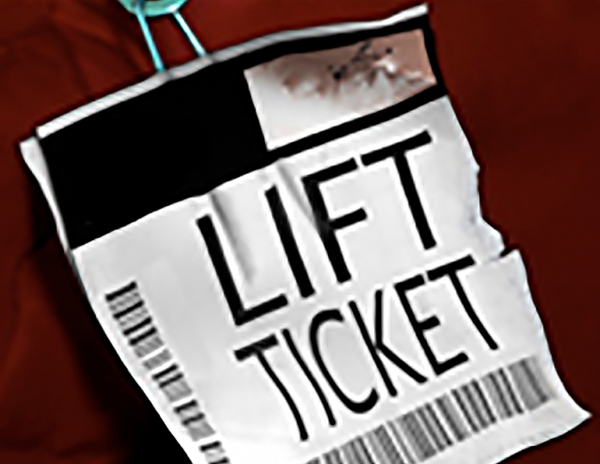 “As long as ski areas use tickets to get on the hill, people will try to circumvent it,” says James Bartlett, general manager at Nubs Nob, Mich.

The stories are legion.

“I am the reincarnated son of the Dalai Lama and deserve a ticket on Martin Luther King Jr. day because he was a man of peace like me.”

“I lost my wicket [probably because I bought my ticket in the parking lot].”

And of course, the ever popular, “I forgot my pass, can I have a day ticket [to give to my buddy]?”

It happens almost every day in snow country. Here are some examples.

I’m In College, I Swear

For decades, mountain resorts have offered full-time college students incredible deals on season passes. For equally as long, non-collegians have complained about the college price break, and many have tried to bend the rules to get it.

A few years ago, when Mount Snow, Vt., still offered a college season pass, some folks went above and beyond to beat the system. Mount Snow required students to present a valid student ID and a stamped letter from the registrar’s office confirming their full-time status. Season pass office staff were trained to make sure these two forms of qualification were legit, with no exceptions.

So, when a group of “students” showed up with letters from a community college registrar’s office and what looked to be real student IDs, there wasn’t much question—at least initially.

Mike Murphy, season pass manager at the time, remembers this group well. “They all walked in together, presented their stamped letters and IDs, and each wanted to purchase a college pass,” says Murphy. “Everything seemed legit. We sold them their passes and they went out to ski.”

But one of the season pass staff had seen many letters from this same community college, and these letters seemed slightly off. “So we checked the file for other letters, and sure enough, there were some minor differences,” Murphy recalls. “Then we called the school, and no one had ever heard of any of these people.”

Busted. Mount Snow blocked all their passes in its system, “and the lifties brought them inside after their passes scanned invalid,” Murphy says. “Each person had to pay the difference in price of a college pass and our full-price, unrestricted adult pass. It was an expensive day for them.”

Rob Megnin, who oversees sales, marketing, reservations and snowsports at Killington, believes technology is making ticket scams less prevalent than they once were. “A couple of things have happened. First, we have killable barcodes. We do a promo, push out a lot of vouchers, and upon scan, these barcodes are killed. It provides us an element of control,” he says. Second, there’s the prominence of ecommerce. “There are fewer window sales. People are buying more online. We have a little more control over our tickets than in the old days. Somebody trying to manufacture vouchers is not as prevalent,” he says.

Bill Quigley, marketing director at Gunstock, N.H., agrees. He says dynamic pricing and better yield management have reduced the number of tickets sold at full price, and thus taken away some of the incentive to scam.

“People can do so many things online,” Quigley says. “They are finding that balance between price and value. They can find $40 midweek rates, 2-for-1 tickets. Technology and better yield management has softened pricing around the edges a little bit. We don’t have to have a stack of coupons.”

And when physical coupons are in play, fraud seals and identification numbers make re-selling coupons more difficult, because they are easy to track. So, when the son of an employee of one of Gunstock’s promotional partners was selling coupons in the parking lot, he got nabbed easily.

But it’s not just promotional coupons that can be an issue. Employee tickets occasionally pop up on the resell market, as well.

“There are more avenues than ever to try and resell tickets with eBay and Craigslist,” Quigley says. “But it’s also easy to track [so we can see who’s redeeming them]. Employees think they are doing something nice for somebody and making a little extra money, but they don’t realize the effect [reselling] is having on the ski business. Somebody is always looking for an angle. Technology is helping us round the corners a little bit and maybe giving us an advantage.”

At Wachusett, Mass., technology has helped nab would-be scammers who try to use stolen Wachusett gift cards or major credit cards to load money onto a new or existing gift card.

In one incident, a “tour director” collected money from a group of 40 for a ski trip to Wachusett, pocketed the cash and paid for the tickets with a fraudulently loaded Wachusett gift card. Staff quickly realized the fraud, and by watching camera footage from the ticket booth that day, they were able to pinpoint the group in question, and get information about them from the rental shop. “They all used their correct names and addresses when they rented, so they were probably unaware of the scam,” says David Crowley, GM.

As a result of this incident, management and guest services now receive notification anytime someone loads $50 or more onto a gift card. Accounts with different addresses for billing and shipping, large out-of-state purchases, and new cards purchased with existing gift cards are also flagged. At least one fraudulent retail purchase was averted when the clerk received a message on her cash register to contact her supervisor because of a flagged gift card. Sure enough, the card in question had been fraudulently loaded.

Like many resorts, the most common scam at Hunter Mountain is tickets being resold in the parking lot. Here again, technology is thwarting miscreants.

“People buy a ticket, ski half a day, and then try to sell the ticket in the parking lot,” says Sarah Slutzky, resort services manager. “If someone comes in and needs a new wicket, we get suspicious. Generally, if the ticket is not attached, they didn’t buy it from us.” It’s for this reason Hunter keeps wickets behind the desk.

But just to make sure, staff can scan the ticket to find out who bought it and when, how much was paid for it, and other details like if it was purchased using a voucher. Slutzky’s staff will question the person, and often their answers don’t match up with the data on the ticket.

This situation rarely ends with a pleasant handshake. “Most of the time it gets very aggressive, even though the ticket says right on it, ‘Not for re-sale,’” Slutzky says. “My favorite response to getting caught is, ‘What do you mean accusing me of stealing? I’m a doctor.’”

Punishment for ticket scams is usually situational. If the scammer made a mistake, is apologetic, has never done it before, the penalty is often just the price of the ticket they should have bought. Angry and belligerent? Time to call security.

Many resorts incentivize lift attendants for every would-be scammer they catch. Bridger Bowl, Mont., gives ticket checkers $25 for every fake or nonexistent ticket they find. “It helps provide attendants some incentive to be extra vigilant on the job,” says Doug Wales, Bridger Bowl marketing director. Other resorts pay similar bonuses.

One difficult scam to catch is a borrowed season pass with a photo clear-taped over the original picture, and then slid into a jacket window. “It takes an experienced ticket checker to catch,” says Kris Blomback, general manager at Pats Peak, N.H. Blomback says lifties get $10 for every fraudulent day ticket they catch, and $25 for a season pass.

One exception is Nubs Nob. “I will buy a checker a beer, if they are of age, if they catch a fraudulent ticket,” Bartlett says. “But I am not comfortable with paying incentives. I think you’ve got some risk if you’ve got lift operators looking that hard for ticket fraud when they should be loading the lift safely.” Bartlett says lifties are told to call in anything suspicious, and dedicated ticket checkers then take over.

“Do we get ’em all?” Bartlett says. “I’m sure we don’t. But we don’t want to be so proactive we irritate people [who are following the rules]