“We decided to start to run our Stevenson Express for scenic chairlift rides, but it only had a ramp for winter use. So we had to design and build an unload/loading deck. We decided to go with a traditional- looking deck with railings that we stained. We dug 24 footers around 60” deep. With winter in mind, we had custom brackets made in key locations, and had a custom-made hinge fabricated. With the brackets we can remove two small deck sections and hinge the rest down, instantly transforming it back into our winter ramp. The downhill deck stays year-round, helping downloading employees and patrollers assist guests who might find themselves above their ability to get back to the bottom safely.” 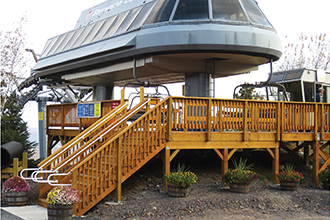 The summer ops crew at Blue Mountain, Pa., came up with this super convenient idea for their challenge course customers to store their belongings, and it didn’t take long to implement. “The baskets were not part of our original design. They were something that we brainstormed out of necessity. As for the materials, we needed something quick and cost effective, so we saw what we had laying around. The baskets and pegboard were sitting in our scrap pile. Our mountain ops crew built this storage wall in less than a day, and our ropes course staff set it in place. It is freestanding and can be relocated easily.”

The lift maintenance crew at Snow Trails, Ohio, found an easy solution to save the battery life of their emergency lights. Mountain manager Thad Philpott explains that “when we powered down the lifts in the off season, we discovered that some of the batteries were not recharging when the lift was powered back up in the fall, thus resulting in battery replacement. So at the beginning of the off season, we opened the emergency lights and disconnected the batteries. But this became a time consuming process. Eventually, someone suggested we just insert a toggle switch. A ‘maintained’ toggle switch was installed by cutting the wire coming from the positive (+) side of the battery.” Now, when the mountain shuts down in the spring, the crew flips the switch, and the emergency light batteries are alive and well for the next ski season.