Gateway to Happiness (and Profitability)

RFID access gates are a convenience to guests and a surprisingly cost-effective tool for operators. 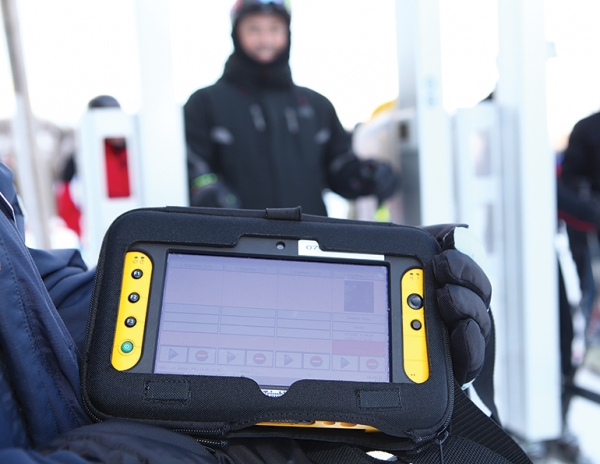 Almost every guest at a ski area has a grand time once the skiing and riding actually happens. But customers can become dissatisfied with the rigmarole needed to get to the slopes—parking, standing in line to get tickets, gearing up, standing in line again to get onto the lifts. Anything that eases the process is a step toward a happier clientele.
Front line employees play a key role, of course. But technology, too, can expedite the process. The technology is radio frequency identification—RFID for short—and it can make ticketing and lift boarding speedier and smoother than ever. Just ask almost any ski-area operator in Europe, where RFID systems are nearly universal, or the growing number of North American adoptees.

“Customer convenience” is the top reason for installing an RFID ticketing system, according to the companies that sell the systems and the ski areas buying them. With RFID, there’s no longer a need to employ ticket checkers in the lift line, slowing things down as they validate each ticket by electronic scanning or other means. But additional (and not incidental) benefits for ski-area operators quickly follow: fraud reduction, personnel reduction, pricing versatility, guest data assimilation, ancillary sales and marketing opportunities, and others.
According to Larry Williams, president of Axess North America, a leading RFID provider for ski areas: “About 80 percent of all ski areas in North America can benefit from [an RFID system].”

A guest buys a ticket the size of a credit card, made of either plastic or paper stock that’s implanted with an RFID antenna, puts the card in a jacket pocket, and is off to the lifts. Gates installed at lift-access points read the card electronically, right through clothing—no need to affix a wicket or zip-tie someplace where a lift attendant can see it, or unzip to pull out a pass. If the card is valid, a turnstile arm swings open, allowing the guest to proceed to the lift-loading area.

The gates can be ground-based or more expensive overhead “gantry” gates, and can have reading panels on just one side (less expensive) or on both sides.
In addition, RFID reading devices (not necessarily gates) can be used to scan the ticket/card at points of sale for other services. For example, at Alta, Utah—an early RFID adopter—customers can swipe their cards over an RFID “smart pad” located by the register to purchase food, which is charged to a credit card linked to the ticketholder’s account. Reloading lift tickets with a smartphone works much the same way.

View From the Field

Alta’s Tim Kohl says that the RFID gates succeed on several levels. They greatly improve the flow of lift lines, allow the ski area to eliminate 26 ticket-checker positions (though line-management personnel are often still needed), and reduce ticket fraud dramatically.
With the implementation of RFID, lift-line employees become more customer-service oriented, says Williams: “They are no longer policemen. They are there to help, explain, and advise as problem solvers and hosts.” Still, a gatekeeper positioned unobtrusively off to the side watches a screen, usually displaying photos of ticketholders, to identify cheaters—say, someone using another’s season pass, or an adult using a junior pass.

Perhaps the biggest benefit from a customer-convenience perspective, however, is that ticket cards are reloadable via smartphone. Skiers on their way to the mountain can use their phones to scan a QR code on the card that brings them to a mobile storefront. There, they can add and pay for that day’s lift access without having to get a new card. No need to stand in line at the ticket window; guests go straight to the lift. That can go far in reducing the usual early morning base area mayhem. According to Axess’ Mike Bisner, roughly 60 percent of tickets at Quebec’s Mont Saint-Sauveur were reloads by late in the season.

Cost of the cards has become negligible, roughly $1.25 apiece, and many RFID-equipped resorts sell cards for $5. But the cards are durable—Axess guarantees them for five years—so the cost to long-term guests is negligible, too.

The benefits can be significant. Okemo, Vt., installed a gantry-gate RFID system last fall. Ethan Mueller, VP of Okemo owner Triple Peaks, says that the goal was to “improve the guest experience” by streamlining the ticket purchasing and checking process. But it also provides a simple way to collect guest data.

With the previous paper-ticket system, says director of operations Deb Greene, “anybody who bought a ticket was anonymous to us.” Using RFID, the resort can now assimilate a ream of valuable information, including traffic flow on the mountain, guest demographics, and visitor frequency. The data can be used for sales and marketing purposes, as well as daily operational planning.

How to collect that data? Most Axess clients use the company’s server in Austria, where the company is based, according to Williams. That saves resorts the time and expense of software installation and integration on a resort’s own IT system. Okemo, however, felt that dovetailing Axess data into its own system made sense, to “blend [RFID data] into our whole environment of services,” as Greene puts it.

The benefits of RFID ticketing are many, but multi-resort partnerships and variable ticket pricing may be two of the most compelling. For example, RFID gates will soon be installed at Okemo’s partner areas, Mt. Sunapee, N.H., and Crested Butte, Colo., with the same card usable at all three areas.

But an even greater advantage might be in partnerships among areas under different ownerships. RFID cards enable unaffiliated areas to offer a ticket product that can compete with multi-resort passes offered by conglomerates such as Vail Resorts.

The multi-resort concept was a driving force in the initial surge in RFID adoption in Europe. European resorts often have multiple lift owners. Determining a fair way of distributing revenue was often an issue in the past. But RFID data, updated up to the minute, accurately tallies lift usage, and revenue can be divvied up accordingly. RFID ticketing has enabled a resort consortium like Dolimiti Superski in Italy, with 12 resorts and 140 lift owners, to join forces in offering a multi-resort ticket in which revenues can be fairly distributed.

The multi-area RFID ticket concept is still new to the U.S., but it’s growing. In Utah last year, Ski Salt Lake offered a four resort RFID “Super Pass” for Alta, Snowbird, Brighton, and Solitude (all four are equipped with Axess gates) as part of multi-day packages offered at various Salt Lake hotels. The Axess system distributes revenues according to which resorts passholders visit.

RFID may also enable a trend toward offering a larger variety of ticket-pricing options. Mont Saint-Sauveur, for example, offers a four hour ticket—the clock starts the first time a guest goes through an access gate, and ends on the last pass through—that has proven to be the resort’s most popular ticket option. RFID opens up a world of possibilities: single-ride, one-hour, four-hour, full-day, half-day, multi-day, night only, etc. Williams declares that with RFID technology, pricing options are limited only by a resort’s creativity.

The bottom-line question, of course: What’s a reasonable return on investment? That depends on the size of the RFID installation. Axess has installed systems as small as four gates and six or seven points of sale at White Pass, Wash., and as large as 75 gates and 200 points of sale at Mammoth Mountain, Calif.

Williams says the starting cost is about $100,000, with an average installation running about $400,000. Calculating the ROI can be tricky, because RFID generates little direct revenue. But Kohl estimates that Alta has captured about $4 million of potentially lost revenue through greater fraud protection over the past eight years. Savings from staff reductions, and new sales and marketing opportunities based on data collected through RFID, mean the initial investment can be covered relatively quickly, perhaps in less than a year.

Okemo’s Mueller paints the ROI picture with a broader stroke. If RFID improves the overall guest experience, he says, that in itself, over the long haul, makes the investment worthwhile. The objective is to get skiers and riders on the mountain and having fun as easily and seamlessly as possible, and implementing RFID technology is a step in the right direction.