Charting the long-term trends at U.S. resorts through the lens of the NSAA Economic Analysis of United States Ski Areas. 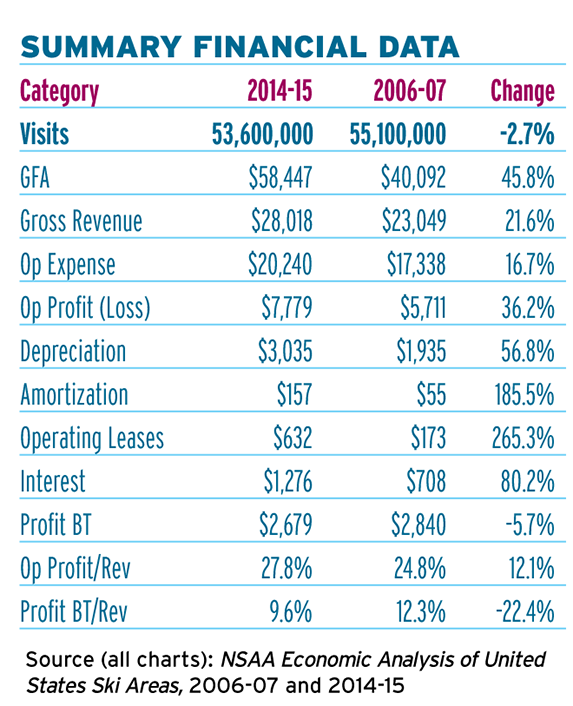 How has the economic performance of U.S. ski areas changed since the last “normal” year preceding the Great Recession, 2006-07? What can we learn from any of these changes? Can what we learn be put to practical use? These were the questions that came to mind when SAM asked me to write about the 2014-15 NSAA Economic Analysis of United States Ski Areas.

For years I have used the analysis to assess how we were performing against our peers, by region and size, along with our status against the industry average. Unfortunately, this was always a year-over-year review, and for the most part did not lead to significant key learning, beyond putting a price tag on the ups and downs of a season. For this review, I took a longer view.

First, a few cautions regarding the limitations of the data:

Keep these limitations in mind.

One of the most significant observations is how little has changed, or perhaps, how consistent the changes have been across the industry since ’06-07. Whether looking at physical ski area characteristics, economic characteristics, financials, revenues and expenses, or critical ski area ratios, the data suggests most items have changed in a consistent manner, other than the influences of macro inputs that have affected the industry across the board in the last nine years (i.e. energy, labor, healthcare costs, interest and currency exchange rates, etc.).

First, on average, the industry has successfully grown revenues faster than expenses, leading to a growth in Operating Profit of 36.2 percent since ’06-07. That is impressive, given the economic headwinds experienced since 2007.

Second, the pace of growth of depreciation, amortization, and interest, along with the use of operating leases, all signal a dramatic shift in how, on average, the industry is conducting its business. It appears that improvements have been financed through debt, and some portion of equipment acquisition is trending toward leases and away from capital purchases.

These observations guided a deeper dive to see what else could be learned.

On the Total Revenue/Visit front, excluding the Pacific West, all regions have successfully moved the needle. The Midwest region is leading the way, increasing Total Revenue/Visit by 48.8 percent over the period, followed by the Rockies at 33.9 percent. Ticket Revenue remains the largest contributor to total revenue. Unsurprisingly, the Rocky Mountain region realized the greatest increase in Ticket Revenue/Visit, up 47.6 percent. Increases in the Southeast (33 percent) and Midwest (32 percent) were also strong.

The change in the percentage of Total Revenue represented by Tickets reveals some surprises, though. The Southeast region drove its percentage of Ticket Revenue up by 16.5 percent, while the Midwest region’s percentage declined by 11.3 percent.

Let’s get this straight: the Midwest has been growing Total Revenue/Visit faster than other regions, yet its Ticket Revenue as a percentage of Total Revenue has declined?

The tables in the Analysis (and online) explain what’s going on. They show changes in average revenue by line of business across the regions. In nearly every LOB, the Midwest posted the largest increases of any region (Retail, up 239 percent; F&B, 101 percent; Lessons, 69 percent). The only business in which the Midwest did not own the largest increase was Rentals, at 14 percent (the Rockies led here with a 56 percent increase).

RRC breaks out a few deeper views of key areas in the annual reports, including summer revenue. Again, the Midwest is growing summer revenue streams as well as winter. Since ’06-07, the Midwest has grown Summer Revenue far more than any other region, at 109 percent (the Rockies followed at 61 percent). The portion of Total Revenue generated by Summer is now 14.2 percent in the Midwest, just slightly behind the Southeast’s industry-leading 15 percent (which has been consistent since ’06-07).

A CLOSE LOOK AT EXPENSES

Only a couple of areas of Expenses warrant a close look. Every region has been growing Gross Revenue faster than Expenses, which is good. However, the Midwest and Rocky Mountain regions have far outpaced other regions in Expense Growth/Visit, up 46.4 percent and 37.7 percent, respectively.

Intuitively, I envision these increases stem from a shift over time away from purchased equipment (think snowcats) to leased fleets, along with increased borrowing and interest expense to fund improvements (which increase revenue) and investments in new systems and technology to make resorts more efficient (which, eventually, lead to cost savings). This can be a sound strategy, so long as the increased expense is justified from an appropriate level of growth in revenue, and capital is available.

Direct Labor, the largest piece of Total Expense, shows a similar trend: It increased more in the Midwest (72 percent) and the Rockies (23.3 percent) than other regions. Were new employees and more labor hours required for new businesses, attractions, systems, and assets?

I also looked specifically at the profitable resorts, which the Analysis divides into Top and Bottom Halves, to see if there were any discernable differences of note. Both groups showed positive improvement in “Health” (Debt/Cash Flow), but the Top Half significantly outperformed the Bottom Half. The same held true for Lesson and Rental Revenue/Visit.

On the Expense side of the ledger, the Bottom Half areas have controlled the growth of Direct Labor, G&A and Depreciation, Leases, and Interest much better than the Top Half. For G&A, the Top Half saw an 81.7 percent increase in costs; the Bottom Half increased just 24 percent. This may stem from aggressive cost control by the Bottom group, and/or better access to capital and more flexibility to invest in wages and admin to grow their businesses for the Top Half.

Finally, we must ask, what has happened to retail? Both profitability groups have seen declines in Retail Revenue/Visit, with the Top Half experiencing a 21.3 percent decline over the period, five times worse than the Bottom Half.

Going back to the Regional Revenue Tables, overall Retail Revenue is down 22.6 percent since ’06-07—the greatest discrepancy in performance found in any department. There’s been huge variation here as well, with the Midwest posting a whopping 238 percent increase, while the Rockies fell 35 percent.

What’s going on is not clear. Midwest areas may be investing in new retail endeavors, as they appear to be vertically integrating revenue streams, winter and summer. In the Rockies, Colorado has seen significant retail consolidation and major shifts in the competitive landscape that may be putting pressure on ski area-owned outlets. Or, are profitable resorts making a choice to trade topline revenue to focus more on high margin sales? This sounds like a project for SIA!

In short, there is plenty of industry data available to better understand how your resort is performing. The daunting task is weeding through it all to find the drivers of success unique to your specific situation and circumstances.

The questions ski area operators need to ask themselves are, “do we really know how we are performing against our peers?” and “If we feel we are not performing up to standard or to our potential, why?” If you are serious about asking those questions, the data exists to start your own analysis. Answer the questions, then you can take steps to improve your operation and achieve a new level of success. n