How resorts measure and report their acreage/miles of terrain has wide-ranging consequences, locally and internationally. 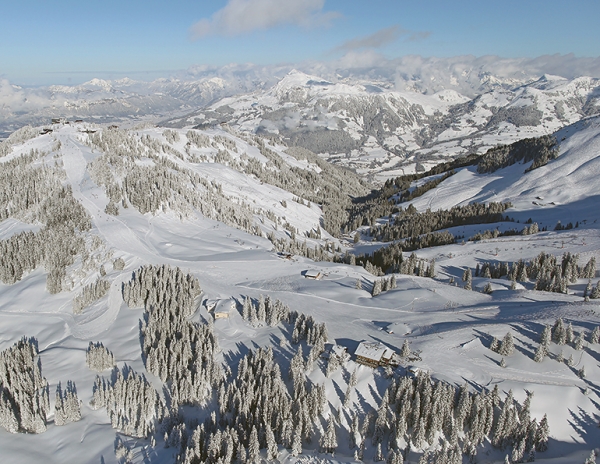 Kitzbühel, Austria, is one of Europe’s largest resorts—no matter how you measure it.

The story even made it to us in Europe: an American customer of the Subway fast-food chain sued, claiming a sandwich promoted as a foot-long came up short.

It’s not hard to measure the length of a sandwich, and in response to the lawsuit, Subway has provided all its outlets with measuring tools. But it’s a lot harder to measure a ski area.

North American destination resorts commonly measure their size in skiable surface, either in acres (U.S.) or hectares (Canada). Trail count is another popular metric, though there’s certainly been debate as to whether counting upper, middle and lower sections as three trails is a fair approach. Regardless, this all seems to work well enough for the North American market. But it puts North American resorts at a disadvantage when trying to attract European guests.

That’s because neither skiable surface nor the number of runs are common measures used in ski area marketing in Europe, where it’s all about length of the runs—in miles (UK) or kilometers (everywhere else).

Compounding this discrepancy, over the past decade or so, North American resorts have shifted toward branding and sales-oriented marketing efforts, and boasting about statistics has faded somewhat.

In Europe, by contrast, every market study of decision-making proves that size and statistics still matter to European downhillers—a lot. Size always ranks among the top objective criteria, together with subjective data like the reliability of the snow cover and quality of the pistes. And length of runs is a very easy metric to understand, and to use for comparison purposes. (Ed. note: “miles of terrain open” is one of several metrics resorts can report on snocountry.com, one of the largest sources of snow conditions reports in North America, though many areas don’t use it.)

The perception of European skiers is that while there’s great snow in North America, particularly the West, the resorts there simply can’t compete with the large European ski areas in terms of size. That can, and does, lead to decisions against a trip over the Atlantic.

The principal reason for this perception is the lack of comparable data. Here’s an illustration of the disconnect: Vail boasts 2,140 skiable hectares. Kitzbühel, Austria, boasts 209 kilometers of runs. How do you compare them?

No one really knows, and in the absence of an obvious answer to the question, Euro-skiers will likely turn to the next objective statistic used to measure size in Europe: the number of lifts.

This is the point at which North American ski areas regularly drop off the list of candidates for a special, once or twice in a lifetime ski trip, for which cost isn’t that important. Because when it comes to the number of lifts available on one ticket, North American resorts come up short. Vail ranks 84th worldwide, Whistler Blackcomb 55th, Big Sky 64th, and Beaver Creek about 200th.

But what if those resorts—and others—could show how they really stack up when it comes to delivering plenty of time on the slopes, in a way that makes sense to European skiers (or even North American ones)?

One of the core functions of my business is thoroughly analyzing and certifying the size of ski areas. My book, “Ski Guide Nordamerika,” was first published in 2005; researching it gave me the chance to ski at nearly 100 resorts in North America. I’ve run the numbers on a lot of North American resorts, and I can tell you that by using the metrics that Europeans will understand, these resorts rank high. Measured by miles of runs, Park City (having now absorbed Canyons) ranks #6 worldwide, Whistler Blackcomb ranks 10th, Big Sky 12th, Vail 13th and Beaver Creek 24th.

With a proper understanding of the European market and how it evaluates ski areas, North American resorts can present a very compelling case. A visit to North America actually means good chances of finding superior snow, uniquely American ambience, phenomenal terrain diversity, and destinations very much on par with Europe in terms of size.

Let’s return to the length of runs. Citing them more specifically will help to overcome the apparent disadvantage in the number of lifts. European resorts typically count a lot of lifts, many of which are actually legacy surface lifts with low capacity.

Consider also that large resorts in Europe often feature only two or three identified (and measured!) runs from each lift. Though it’s true that there’s often a huge amount of terrain immediately adjacent to those runs, European resorts tend not to emphasize it to the same extent as North American resorts, simply because European resorts don’t perform anywhere near the amount of avalanche control work that North American resorts do. And if you venture off-piste in Europe, even between two groomed and marked runs, you assume all risks.

All of this translates to more elbow room and the freedom to follow your own line, instead of navigating between the hordes of other skiers congesting the pistes. The freedom to go almost anywhere within the boundaries is the big advantage to skiing in the U.S. and Canada, and of enormous appeal to European skiers who understand it.

A clear representation of comparative size and spaciousness is also important because it remains accurate even during periods of less than optimal snow conditions. And let’s face it: bad snow years happen at destination resorts in both Europe and North America. Despite the generally better snow quality in North America, marketing that focuses too much on snow conditions could lead to disappointment. Resorts need to emphasize their other assets, too.

So, how to measure the length and scope of runs and open up all this extra marketing power? Until recently, there were no rules and few recommendations on how to do it.

At the risk of boasting: things started to change in Europe after I published an article in a national German newspaper in 2013. It revealed that most ski areas in the Alps exaggerated their actual run length—in some cases, by as much as threefold. [Ed. note: we doubt that any such exaggeration would occur in North American reports of skiable acreage ...]

As you can imagine, some resorts were not amused. Others were happy because the analysis confirmed their claims. The industry associations of Austria and Switzerland got a lot of pressure from national media and finally came up with recommendations for measuring the length of runs. Those recommendations aren’t obligatory; ski areas can still claim whatever they want.

But this started to move the needle. Initially, only a few switched to their real figures. It could be wrenching to do so; by my reckoning, one resort in Austria’s Zillertal valley shrank from 181 to 88 kilometers, and another in the east Tyrol went from 110 to 37 kilometers. That can be difficult to explain.

To date, no resort in Switzerland has changed its numbers, although the need to do so is bigger there than in any other country.

Sizing Up the Mountains

How did I do the research leading to these changes? My career includes both academic and professional study of cartography and geodesy. In addition to my work as a journalist and consultant in the ski industry, I worked for the company that launched the first-ever GPS-based car navigation system. Technology and aerial mapping make it quite easy to digitize and analyze ski areas.

Initially, I was driven mostly by curiosity; I just wanted to know the true size of ski areas. As my database grew, I began to publish an annual report on the world’s largest ski areas in different categories, including vertical transport capacity, vertical drops, longest runs, skier visits, and—most important to the European market—total length of runs.

Ultimately, this led to consulting. When the Austrian ski areas of Saalbach and Fieberbrunn were seeking permission for an interconnection, they asked me to determine how many kilometers of runs the combined resorts would have. Site and geodetic analysis revealed 270 km, which meant that the merger would produce Austria’s largest interconnected ski area, with resulting bragging rights.

But another resort had claimed to be the largest for decades. My clients wanted to know if they could use my results to prove that they were the new number one. That was the birth of the Verified Length of Runs Seal, which is now printed on their trail map. And with 2.5 million annual skier visits, Saalbach and Fieberbrunn print a lot of maps.

Other ski areas have begun using the Seal. Among them are Kitzbühel, 28 ski areas belonging to Ski Amadé (a region with 760 kilometers of runs), Pizol in Switzerland (which had always used accurate measurement), Wintersport-Arena Sauerland in Germany, and even Parnassos, the largest ski area in Greece. Because of controversy over resort marketing claims, a growing number of resorts are now using the Seal to regain the trust of their guests.

There’s a pricing and value aspect to size, too. Pizol, with its 42 kilometers of runs, charges 54 Swiss Francs for a day ticket. Neighboring Corvatsch charges 75 Swiss Francs and tells its customers that it offers 120 kilometers. But in fact, when it comes to run length, Pizol and Corvatsch are nearly identical.

I’m well aware of some of the marketing wars that have occurred among North American resorts in the past. Believe me, they happen in Europe, too. But just as developing technology rendered fibbing on snow reports obsolete, so too do geodetic mapping and careful analytics. Stretching a resort’s statistics, intentionally or by accident, may soon be a thing of the past. Verified Length of Runs puts pressure on resorts that try to gain competitive advantage by cheating.

I still owe you an answer to the question of whether Vail’s 2,140 skiable hectares mean more skiing than Kitzbühel’s 209 kilometers of runs. The answer: Yes. First, because Kitzbühel has only 538 skiable hectares, and second, because Vail’s acreage comes with more than 220 kilometers of runs. Consider, too, that Vail’s average trail width is almost four times that of Kitzbühel’s. When it comes to quality of experience, that can make a huge difference.

And if one takes into account Kitzbühel’s 47 lifts, it becomes clear that the runs in Vail, served by only 25 lifts (vertical transport per hour at Kitzbühel is roughly 50 percent higher than Vail’s), are less crowded by a factor of six! Of course, Vail grooms a much smaller percentage of its terrain than Kitzbühel does, but even on the groomed stuff a lot more elbow room remains.

Similar analyses can be made at other North American resorts. My bet is that if North American destinations prove to European skiers what they really have to offer, using terminology these potential customers can easily understand, it should become easier to convince them to invest in a long-distance flight to reach their destination.

The Verified Length of Runs Seal is slowly, but surely, gaining traction in Europe. Leaving aside its potential marketing advantage for guests in the North American market, it offers resorts here an advantage in attracting destination visitors from Europe.