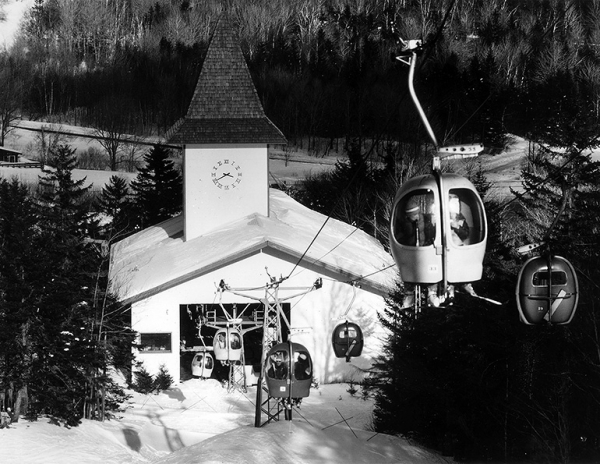 In his new book, “Ski Inc.,” former Steamboat president and COO Chris Diamond provides a window into what he experienced leading resorts from Vermont to Colorado, with insights and stories that can only come from someone who was sitting at the table. His book details dramatic triumphs, meteoric collapses, and lessons learned along the way during his 40-plus years in the ski industry. 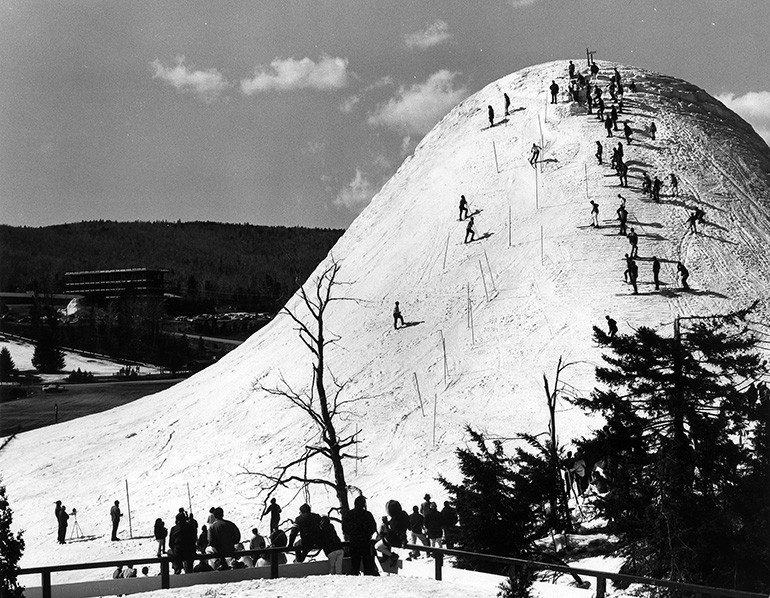 Fountain Mountain, produced by Mount Snow’s 350-foot geyser, hosted race camps into early June. From his early days running Mount Snow, to the rise and fall of American Skiing Company and his tenure at Steamboat, Diamond’s memoir packages history, management best practices, and thoughts on the future all in one. The following excerpts provide a taste of what is, as a whole, a must read for any manager, or anyone aspiring to be one.

ON Management
Pres’ [Smith, Killington’s founder] visibility in the organization and his willingness to take on any task or role created a culture where everyone was expected to pitch in wherever needed. In those days, parking and traffic were quite the issue. Killington experienced such volume on weekends and holidays that the 5-mile-long Killington Road became a virtual parking lot at the end of the day. Many of us assisted in making the best out of the situation by directing traffic.

… The weekly management meeting was held at 7:30 every Thursday morning in the basement of the Killington Base Lodge, in a bar called the Cellar Door Lounge. … Computer spreadsheets covered the table and detailed the performance of all revenue centers and all operating departments by manager, so it was clear where accountability lay. These reports provided more accurate information on a weekly basis than I enjoyed some 40 years later (when the focus had shifted to monthly reporting). Constant attention to the basic metrics of the business made everyone a better manager. Toward the end of the meeting, [marketing chief] Foster [Chandler] provided his forecast for levels of business for the next 10 days. Any special events or weather issues were covered. And then the meeting was over. 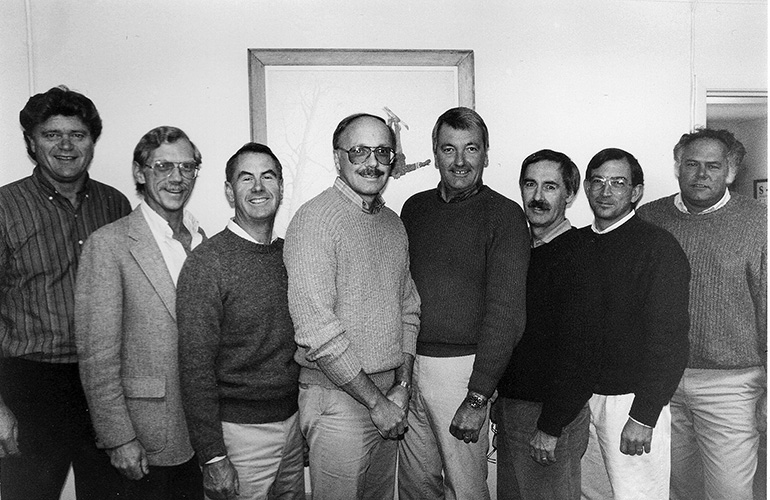 Pres Smith and his Killington team in 1989. From left to right: Smith, Foster T. Chandler, Marty Wilson, Hank Lunde, Dave Wilcox, Leo Denis, Carl Spangler, and Bob Cook. Photo credit: Karen Lorentz.
… I’ve been fortunate to work with some great teams over the past 40-plus years, but in terms of inclusiveness and camaraderie, I can’t say that I ever experienced anything that matched Killington in the 1970s.
Not that there weren’t issues, especially in terms of guest service. Pres and his talented lift manager, Hank Lunde (later president of Killington and Stowe), were fanatical about lift efficiency. “Load every chair to capacity, and try to never stop or slow the lift” was their mantra. Monitoring equipment was in place so Hank could track every stop and slow by lift. He even had the company dispatcher, the aforementioned Ed McDonald, monitor conversations of lift operators to ensure attentiveness. … As a company, we hadn’t learned that it’s best to catch someone doing the right thing and celebrate that.

… The Mount Snow purchase included an 18-hole, Geoffrey Cornish- designed golf course and an airport adjacent to the course. It was a typical golf operation where the pro shop was managed by the resident pro, Jay Morelli. …

His impact during the early years of Killington’s ownership went beyond golf. For a while, he worked winter seasons in various non-golf capacities. His passion being golf, he was a duck out of water . . . and not truly happy until we opened the winter school in Florida. But he was a master at customer service and led our organization by example. His success came from a natural warmth, immediate likeability, and a strong desire to avoid conflict. Problems were resolved on the spot when Jay was involved. Those of us from the Killington organization were trained as production engineers. In many cases, we lacked the softer skills the service business was beginning to expect. I think Jay Morelli set Mount Snow up for long-term success by setting the example for its service culture. He does it to this day.

From DIAMOND’S early Steamboat days
… One lesson that I learned from Ed, [Meagher, of Woodstone Consulting] and which reinforced my own evolving philosophy on leadership, was that of “musher” management. “You lead from behind,” Ed said in describing my personal style. His example was a dogsled team. You provide the direction, make sure everyone is fed, show concern over their well-being, and build loyalty. You make sure you’ve picked the right dogs for the team, and then get out of their way and hang on.

… I was all ears for Ed’s training. Some elements were quite basic, but amazingly, very much needed and appreciated. Many years before, I had heard this summary from an executive: “In my 40 years of management, I’ve never met an employee who woke up, stretched, and said, ‘I can’t wait to go into work today and screw up.’ It just doesn’t happen that way!” So true.

We typically fail as managers in providing the right resources, or, and this is equally as likely, we place the individual in a position where success is impossible: wrong skill set, wrong environment, whatever.

… Instead of focusing on an individual’s weaknesses, the discussion should be positive: What are the skill sets required, and is this individual a good fit? If it’s the wrong fit, then that’s management’s problem, not the individual’s.

The message [from Ed] was, “Everyone can shine like a diamond when in the right setting.” Basic, yes, but something the Ski Corp. team needed to hear at the time, as there were numerous failings in just this regard within the organization.

… Seeing what was wrong was definitely a skill I brought to the job as an area manager. It was also a weakness if I let that dominate my communication with staff. If you’re constantly pointing out what is wrong, you quickly wear out your welcome. “Oh, here he comes again . . .”

That lesson was learned over time. … Fundamentally, any correction or criticism had to be positive. Focus on what was right, and then mention what could have been done differently to make it better.

The ski business is a service business. Service starts with the staff. If employees don’t treat each other with respect and provide great “service” to each other, how can we expect our staff to have a quality interaction with guests?

The Les Otten Years
“Fixing” Killington was going to be Les Otten’s primary focus. As he often remarked to members of the old regime: “There isn’t time to debate what we’re going to do. I know what needs to be done, and I’m going to do it.”

Otten spent money, reinvesting in new facilities at all his acquired resorts, but nowhere more than at Killington. … Nearly every aspect of mountain operations was improved, but the base buildings remained largely in 1970s sameness, overcrowded, plainly designed, and, almost without exception, serving poor food. I think most Killington skiers would agree that, despite the Otten investments, a disconnect remained between the mountain and base-area experiences.

… Les had many strengths: superb mastery of the complexities of Eastern snowmaking, charismatic personality, tenacity, raw intelligence, marketing/salesmanship, and a true passion for the sport. He was masterful at generating personal publicity and careful to cement his public image: athlete, passionate skier, golden retriever at this side. He was also an exceptional communicator when on-stage. He seldom used notes, no matter how long the presentation. Those speeches could be mesmerizing for the audience.

[Otten’s leadership style and Steamboat’s mentality] was a clash of cultures if there ever was one. Steamboat’s brand was built on its Western, family-friendly ranching culture. Add in champagne powder, real town and real people . . . and that pretty well summed up how the community viewed itself. The employees were not prepared for Les when he showed up for meetings with his new golden retriever puppy that contributed liquid and solid deposits on the office-building carpets. The company had clear rules prohibiting pets from the workplace, but Les paid no heed. He was oblivious to how he was viewed and how the reaction was building. While completing the January workforce reduction, he flew in on the corporate jet. These things were noted.

… While these behaviors were on exhibition daily, the company was posturing itself as a service-driven organization. From the 1998 Annual Report: “In executing each of these initiatives, we strive to engage our guests in unique and memorable resort experiences inherently personal to each guest . . .” An organization cannot deliver world-class service to its guests unless it treats its employees and stakeholders the same way. A disconnect will, as it did, eventually take a toll in terms of the guest experience.

To purchase your own copy of the full 216-page hardcover version of Ski Inc. ($25), visit: www.skidiamondconsulting.com. 