CCSAA Moves Into the Future

The XC association faces many of the same issues as NSAA, plus a few of its own. And like NSAA, CCSAA is pushing on several fronts. 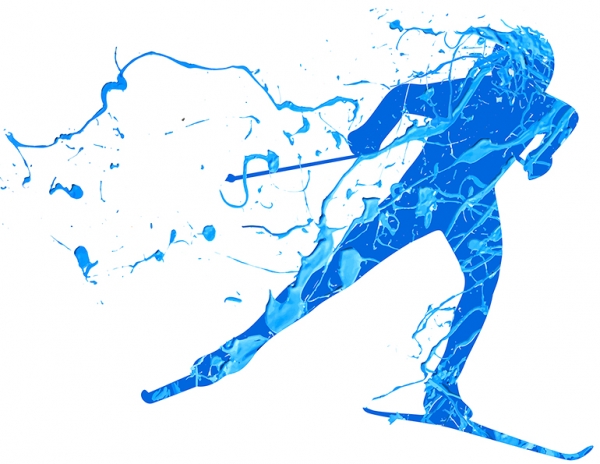 Of all the changes taking place at regional and national ski associations across North America, none are as sweeping or urgent as those at the Cross Country Ski Areas Association (CCSAA). Cross-country faces many of the same issues as alpine skiing and snowboarding, plus some issues unique to itself. The parallels and occasional divergences are illuminating.

CCSAA has existed since early in the life of XC areas. Johannes von Trapp founded the world’s first cross-country ski center at Trapp Family Lodge in Stowe, Vt., in the late 1960s, just about 50 years ago. By 1973, he had inspired the launch of enough other centers that they created a regional trade organization, Northeast Ski Touring Operators Association (NESTOA). Despite changes in name and priorities over the years, the Cross Country Ski Areas Association (CCSAA) remains a force in the Nordic industry today.

CCSAA has exerted a quiet but profound influence, initially in the U.S., but ultimately in Canada as well. The organization has been cutting-edge on many issues, and the Nordic business wouldn’t exist in its current form, or even be viable, without it. There have been plenty of challenges, of course. But today, with a dynamic new executive director and an energetic, focused board of directors, the organization seems to be entering a new era, targeting major growth.

BACK TO THE BEGINNING

To understand this rebirth, it helps to know a bit about CCSAA’s early years. 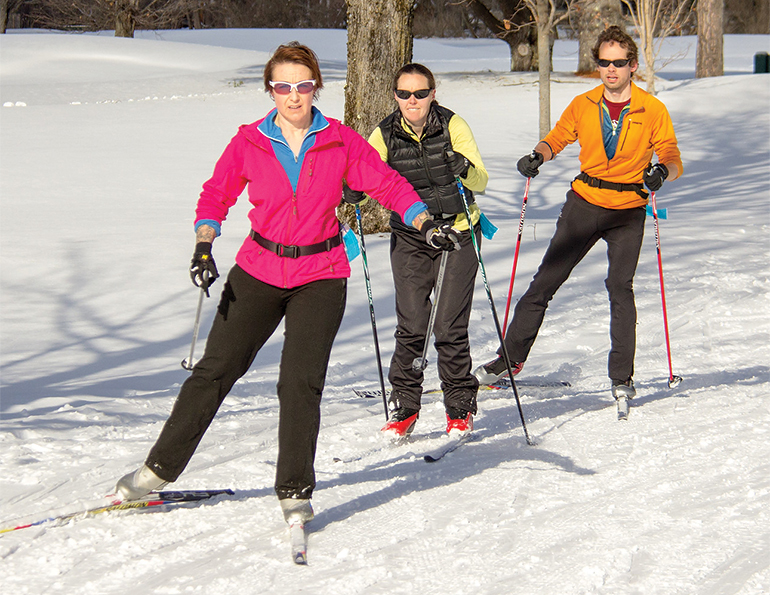 In its early years, CCSAA persuaded many XC area operators to emphasize recreation over racing—though racing remains a PR plus. 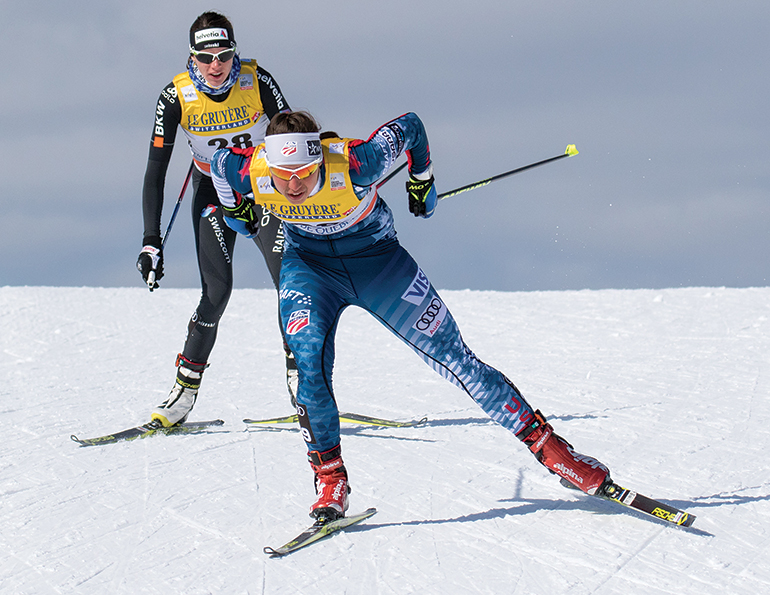 By 1977—a decade after the Trapp center opened—there were dozens of XC areas between the coasts, and NESTOA went countrywide. After further iterations and acronyms (National Ski Touring Operators Association, Cross Country Ski Areas of America) and several chief executives, in 1988 the organization became the more inclusive Cross Country Ski Areas Association (affectionately known as “KISSA”), covering both the U.S. and Canada. Its scope is broad in another way as well: it represents “member ski services providers,” not just areas, with the twin goals of increasing member numbers and improving the quality of operations.

Chris Frado guided CCSAA from 1986 to 2016, as executive director and then president. They were tumultuous years, initially seeing substantial growth in visits, followed by a plateau and then a drop-off in participants. 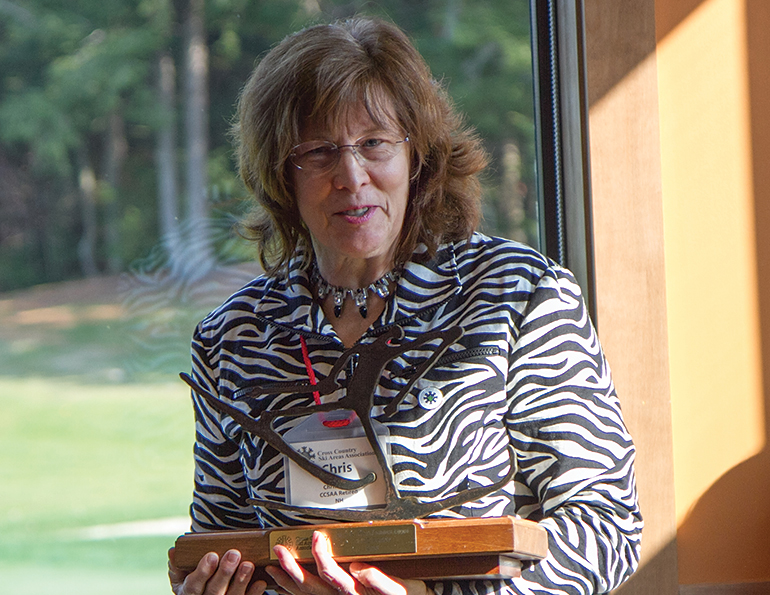 Recently, area operators have had to deal with the morale-sapping issues of long-term climate change and economic fluctuations. Frado oversaw an era of constant change, providing continuity and a smoothing presence in establishing priorities, coping with changing boards, and overseeing entry into the age of the internet.

CCSAA has never been well funded, but thoughtful leadership and generally active boards have been foresighted about establishing goals and deciding what is most important, so it currently runs in the black. Under the leadership of David Ingemie, Snowsports Industries America (SIA) was both an ally and partner for many years, subsidizing specific projects, and providing guidance in receiving non-profit status. NSAA’s Cal Conniff and Michael Berry helped with public lands issues and D.C. legislative agendas.

One of CCSAA’s constant aims has been raising the level of professionalism in the sport. Among early achievements were creating guidelines for trail marking and developing a signage system—much like some of NSAA’s early achievements. Basic amenities had to be identified, such as maps, plowed parking, and toilets. Another accomplishment was persuading many operators that recreational trails are more important than racing courses. This has been a difficult realization at times, as many area founders were elite skiers.

Another parallel with NSAA: Developing an endorsed liability insurance policy was a vital priority in the early days. In the ’80s, cross-country areas worked to separate themselves from their alpine counterparts so that they wouldn’t be lumped with alpine in determining premiums—a definite threat at the time. Alpine-like premiums would have rapidly put areas out of business. “The insurance program exists because of CCSAA, and it’s been a great recruitment tool,” Frado says.

Yet another NSAA-like issue that affected dozens of XC operators was negotiating with the U.S. Forest Service, so that permits would be issued on reasonable terms. This predictability allowed more investment and some assurance of better ROI.

CCSAA has taken a more aggressive approach with consumers to serve as a resource. It has developed a consumer website and is producing and distributing a member Directory in cooperation with Cross Country Skier and SkiTrax magazines.

Member education, though, remains the top priority. The organization continues to emphasize its meetings as a way for operators to interact with each other as well as suppliers and media.

As with many associations, the organization introduces members to new ideas, often discussed and refined at the annual April conferences. CCSAA has been instrumental in fostering a number of innovations and trends: skate technique, snowshoe trails, ski joring with dogs, and most recently, fat biking—with e-fatbikes on the horizon. At the same time, CCSAA has kept insurance underwriters informed, so that innovations haven’t resulted in higher premiums. 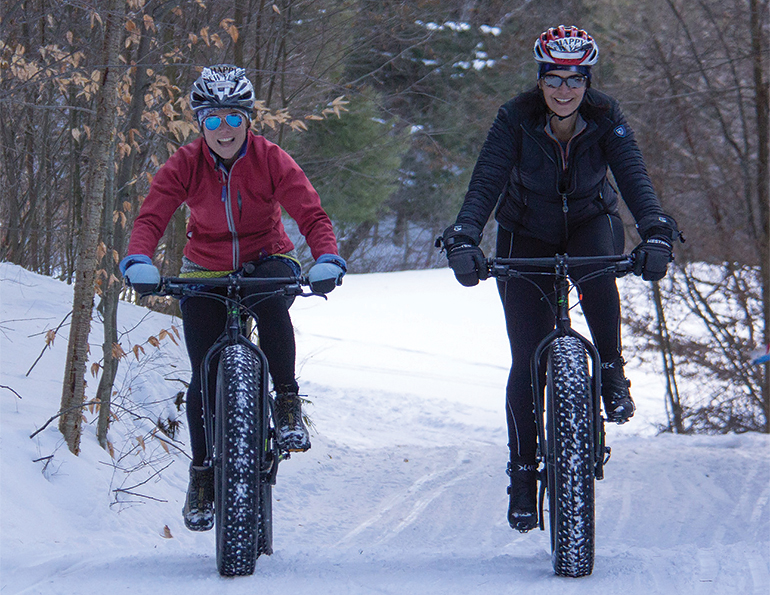 Peter Ashley, former Fischer Nordic vice president, says of the conference, “Operators are crazy if they don’t go and take the opportunity to network with people in the same business. These meetings should be part of everyone’s budget every year. It’s an opportunity to try to get better, and you can easily pay for attendance by what you take away.”

Attendance, however, has tracked the fortunes of the overall business. Attendee numbers have fallen considerably since the late ’80s, from as many as 120 participants then to perhaps 60 now.

The overall XC business, according to data from SIA, peaked around 1988’s 5.8 million skiers (Ed. note: take that total with a grain of salt; SIA figures for alpine skiing are double those reported by NSAA). Participation has fallen since then, though visits plateaued at 5.2 million in 2016-17. The number of cross-country operations in North America has also stabilized or dropped. Understandably, CCSAA area membership has been flat recently, at around 150.

Wave of the Future

More change is on the horizon. The makeup of Nordic area owners and managers continues to evolve, much as it has for alpine resorts. The pioneers have mostly moved on. The following generations of operators, suppliers, and retailers haven’t been as familiar with what CCSAA has contributed to their bottom line. So there’s a natural tendency for them to ask, despite all the ongoing benefits, “What have you done for me lately?”

CCSAA’s new executive director, Reese Brown, and his board may change that. Brown is thoroughly connected in the snowsports industry: he is also Nordic director for SIA as well as the cross-country communications manager for the U.S. Ski Team. Brown also has a well-defined series of projects and priorities. The executive transition has been smooth, partly because he had already served as an industry representative on the CCSAA board. 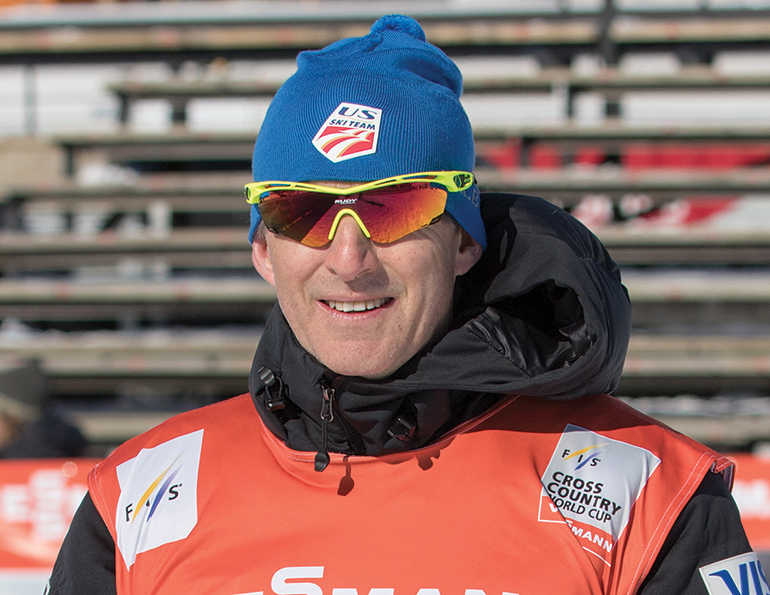 Reese Brown took over in 2016, and is also SIA Nordic director and XC communications manager for the U.S. Ski Team.

In 2016, CCSAA began a campaign to increase its relevance and become a major resource for industry and public. Aims were to not simply increase membership, but also to create a structure for long-term operational stability for its members. This includes growing participation, of course, and also improving the quality of guest experience. Sound familiar?

The organization is well on the way to meeting those goals, notably utilizing Brown’s organizational abilities, people skills, and apparently limitless energy. He also has good fiscal understanding, lots of vision, and is very practical. 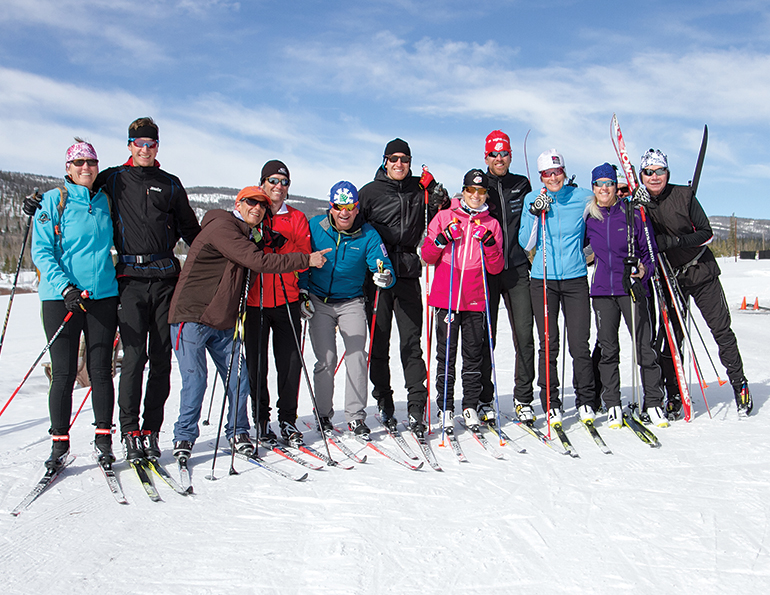 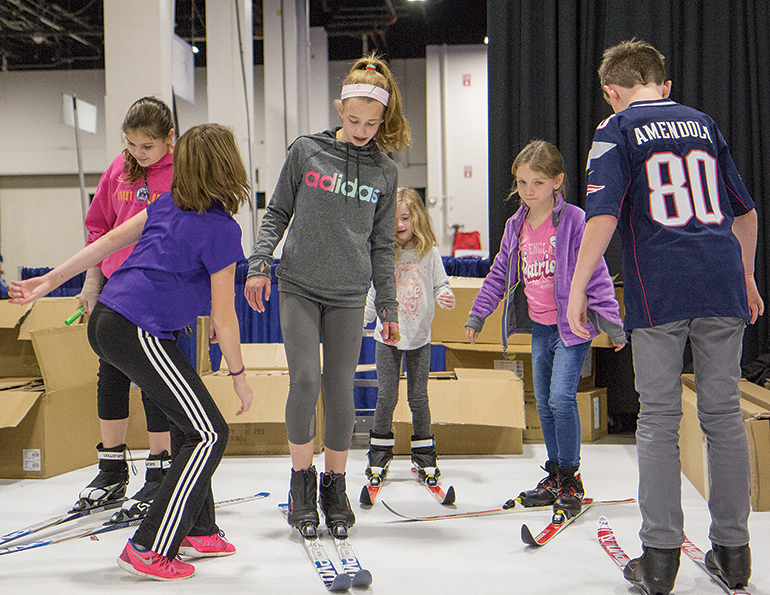 Recreational skiers and youth are keys to the growth of XC skiing.

This combination works. Roger Lohr, editor of www.xcskiresorts.com, says that Brown is “really building operator support for CCSAA. He has a personal touch, is approachable. He’s very hands-on, interactive with both purveyors and areas.” HKD Snowmakers VP Ian Jarrett notes, “Snowmaking is in its infancy for XC areas. For a lot of Nordic centers, it’s a mysterious process. CCSAA is doing a really good job regarding [the benefits of snowmaking] and shedding light on the process.”

Brown tends to the details, but he sees the big picture, too. “It’s a small industry, and it’s very important to have relationships that extend to other on-snow elements,” he says. Operators need to look at the overall quality of the guest experience, he adds, noting, “We need to go beyond the ‘100 km’ size-is-everything approach.”

The current list of CCSAA projects is formidable, including an emphasis on consumer marketing. The association aims to become the leading information source for Nordic operations, for both industry and skiers. Among the strategies:

This agenda is formidable. A lot should be in play by next April’s 2019 Conference, hosted by Mt. Van Hoevenberg, N.Y., and the Olympic Regional Development Authority (ORDA).