Social media have revolutionized the way resorts communicate with guests. Here’s a look at how these media have evolved, and how to take advantage. 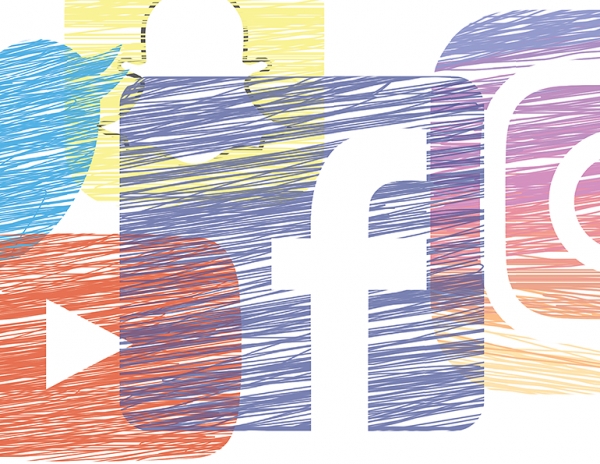 It’s hard to believe that it’s only been about a decade since social media became a prevelant marketing tool for mountain resorts. A lot has changed over that time.

In March 2012, SAM published a fascinating article titled “The Digital Landscape.” Based on a survey conducted across 100 resorts, authors Peter Duchessi and SAM’s own Rick Kahl identified a handful of critical trends around which digital media were driving ski resorts’ most effective promotions. Trends that, in hindsight, were incredibly accurate.

For example, bold predictions and statistics around smartphone usage had led 21 percent of resorts to build a mobile app, but only a small fraction of those resorts had measured an increase in sales as a result. Since then, mobile app adoption has slowed significantly.

Another finding showed that QR codes were being used by more than one-third of resorts, but only a sliver of that group had been able to measure an ROI from their QR code use. Today, QR codes are nearly extinct.
Near the top of the list, however, were two massive trends: microblogging services (e.g., Twitter) and social networks (e.g., Facebook). 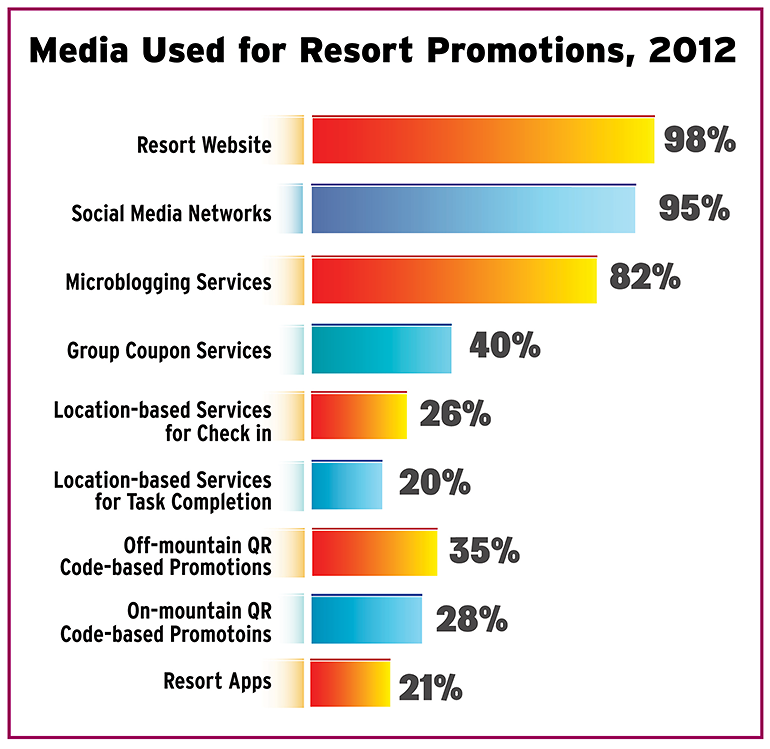 This graph from the March 2012 issue of SAM shows what digital media resorts used most, and highlights how much things have changed.

When you look back at the social media movement in early 2012, it’s easy to see why social media use evolved as it has. Resort follower counts on Twitter alone were absolutely exploding, growing by as much as 9.6 percent in a single month during the 2011-12 ski season. The summer before, Google had joined the bandwagon with the launch of Google+, and Snapchat (originally named Picaboo) had just hit the App Store. Instagram, only two years old at the time, was seeing even crazier user numbers. Already, 5 percent of resorts had larger follower counts there than on Twitter; that number would triple before the close of the 2012-13 season.

But at the exact moment social media marketing was going gangbusters, massive changes were already in the works. Less than two months after that article was published in SAM, Facebook acquired Instagram. Four weeks after the acquisition, Facebook went public. Twitter followed close behind.

By the time 2013 arrived, Facebook had launched mobile ads, tracking cookies, and the now famous social graph. Buying ads on networks such as Facebook became easier, and targeting—built on all that information we’d shared about ourselves—became incredibly powerful and sophisticated.

Then came the scandals, the data breaches, a presidential election, and fake news. Almost on cue, scientists began reporting correlations between high social media use and depression. The shiny facade of the social media movement started to show some signs of weakness.

Where Are We Now?

Six years after that initial SAM survey, the question is simply this: Where are we now? What has been the cumulative effect of all these changes on the value resort marketers get out of these digital platforms? The answers emerged through a survey conducted on SlopeFillers.com in September 2018, completed by 56 marketers from resorts across North America.

Effectiveness of Social Media as a Marketing Tool
The first question sought to identify the trendline of each network by asking how effective resort marketers felt each site is now relative to three years ago.

The clear winner here is Instagram. A whopping 93 percent of resort marketers surveyed said that Instagram is more effective as a marketing tool than it was three years ago. Just one respondent out of 56 felt it was less effective. Facebook was a distant second, with 58 percent of marketers seeing an increase in effectiveness. Twitter has seen the most erosion. 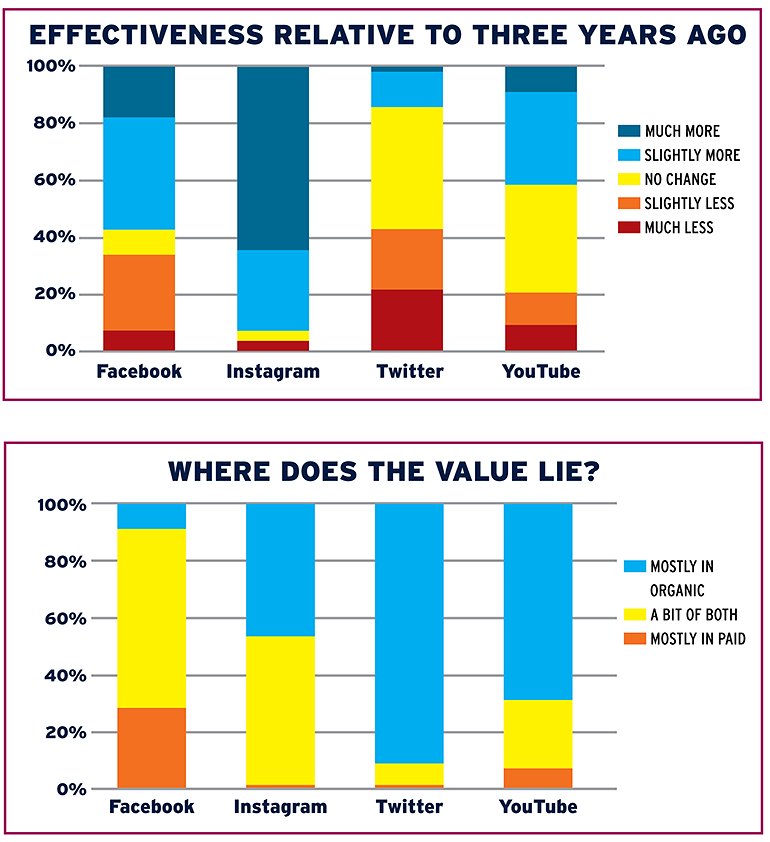 Paid vs. Organic
The next question aimed to pinpoint where that value lies. In 2012, organic reach was the only show in town. In 2018, however, it’s a very different story.

An important factor to consider in reading this chart is the effectiveness and ease-of-use of each site’s ad platform. For example, Twitter appears to be a great place for free distribution, but this may be because it has struggled to deliver the same advertising ROI as Facebook/Instagram and YouTube. In other words, the results of both this and the previous question may suggest that Twitter is a place where free distribution is your only option.

On the other end of the spectrum is Facebook, where fewer than 9 percent of respondents said organic reach created the most value for their brand. This is likely driven by two things: 1) Facebook has intentionally decreased organic reach for brands, making it harder to get much reach without paying. 2) Facebook has also successfully built an ad platform that is both powerful and easy to use, making it easier to buy that reach when needed.

What About Snapchat?
While Google+ never reached the potential its creators intended, Snapchat did. In one six-month stretch alone—May to November of 2015—videos shared on the platform tripled, from 2 billion to 6 billion per day. But how does it fit in the resort marketing landscape today? 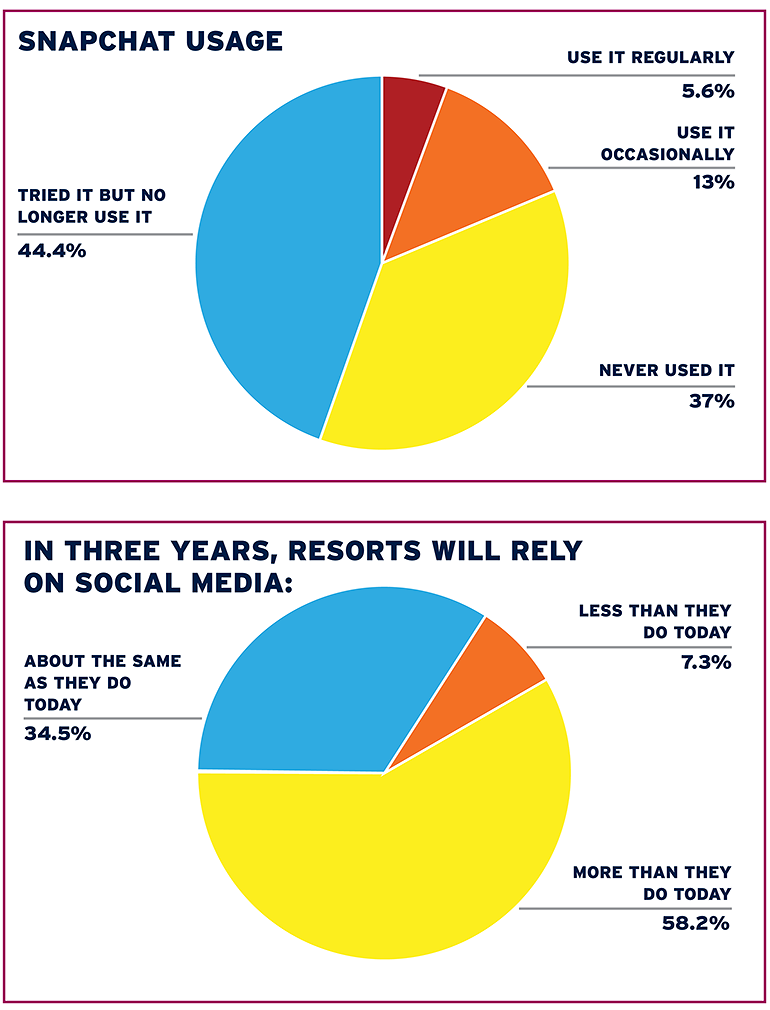 There are two numbers that stand out in this graph (opposite page). The first is 44 percent of the resort marketers surveyed said they’d used Snapchat at one point in the past but have since abandoned it as a marketing tool. The other is that less than 6 percent said they use it regularly. So perhaps it shouldn’t surprise us that 37 percent of respondents have yet to experiment with Snapchat for their resort marketing.

Where is this going?

Rather than simply taking a snapshot of this current point in time, respondents were then asked to predict how much resorts would rely on social media as a marketing tool three years from now.
Overwhelmingly, the marketers surveyed felt that resorts’ reliance on social media is only going to increase. Just 7 percent of respondents predicted it would drop.

As these results have been analyzed and discussed, opportunities for each channel have come to the surface.

Instagram: Choosing One
One challenge many smaller ski areas face is trying to choose one social network to focus on and do well. They don’t have the time or resources to be everywhere, but they could embrace one if they knew where their time was best spent. With lots of organic reach and rapidly increasing effectiveness as a marketing tool, Instagram appears to be a good choice.

Twitter: Do It Right
While some resorts are bemoaning Twitter’s ineffectiveness, other resorts are reaping massive rewards. The rules for success on Twitter are different than those of Facebook or Instagram. Twitter still has a massive, loyal, growing user base. So as more resorts become bearish, this creates more opportunity for other resorts to truly stand out on Twitter if they take the time to do it right.

And time and attention it does take, because using Twitter successfully requires more than just posting Tweets—it requires interaction and paying attention to trends. Engage influencers who follow your resort on Twitter, get in on relevant conversations, and Tweet about more than just the latest happenings at the resort.

YouTube: Not Just Hosting
Survey respondents had the opportunity to include written responses to some of the questions. With YouTube, it was clear that the resorts that didn’t find a lot of value in the platform were the same ones referring to YouTube merely as a place to host videos. The resorts who remember that YouTube is one of the world’s most popular search and recommendation engines will have the opportunity to take their video marketing to the next level.

Some easy ways to do this begin with, of course, making videos and posting them regularly to YouTube. And video titles are weighed heavily in YouTube’s search, which is powered by Google. So consider the video’s content and incorporate it into the title, so it appears in appropriate searches. Choosing the proper category and relevant tags will help, too.

Facebook: Focus on the Ads
Facebook’s ad platform continues to grow in sophistication. If marketers are struggling to see value in organic reach alone, there’s an opportunity for resorts to rethink how they hire for the social media position on their teams. Rather than view deep experience with Facebook ads as a handy bonus, resorts who view that skill as an absolute necessity will be in the position to stretch their budget and drive higher ROI.

The Trend
Social media will continue to grow in importance for marketers. It was a big part of resort marketing in 2012, it’s become an even bigger part of our industry in 2018—and the people on the front lines only see that trend continuing. It may not be as simple or as easy as it was in the glory days, but with the right people in place and enough resources committed to it, social media will continue to be a critical part of successful resort marketing well into the future.