Conduct your own predictive maintenance inspections that don’t cost a fortune or require an outside contractor. 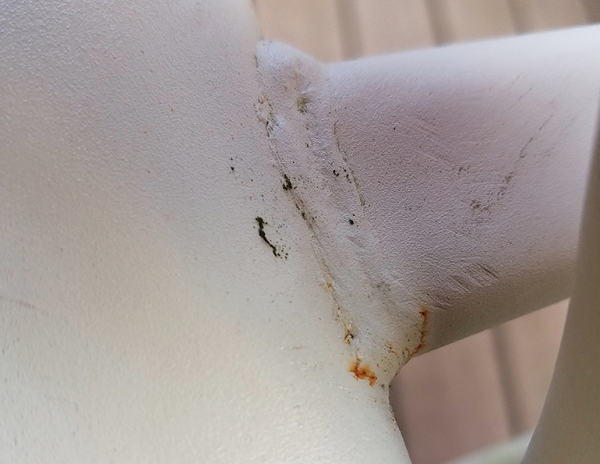 The two rusty paths shown here reveal either cracks or a lack of weld fusion—and should be investigated further to determine the cause and cure.

If this were an ideal world, every ski area would have an experienced expert do a vibration analysis on its lifts at the end of one season, and at the beginning of the next. There would be transducers mounted at the top of the towers and, while the lift was running, the analyst would just plug in at the base of the tower, record some data, and then describe what maintenance was needed. Or, the resort might use solar cells to power a wireless setup that could be monitored remotely.

And at least once per year, there would be an oil analysis on critical equipment, lift drives, snowmaking pumps, and groomers. Oh, and all equipment would be made with corrosion-proof materials.

In that dream world, there would be no mid-season disasters. No need to lift the top bullwheel to replace a bearing during Christmas week. No critical lift shutdown in the middle of MLK weekend to repair a tower. The bearings and drives used on equipment don’t fail instantaneously, after all, and vibration analysis would identify the need for replacement long before any failures occurred.

Unfortunately, we don’t live in an ideal world, and setting up that detailed predictive maintenance program is expensive. But there is a lot we can do with some simple and relatively inexpensive tools.

Find “The Inspector”
Probably the most critical part of setting up an inspection program is picking the right person (or persons). You want a technician who is skilled and understands how machinery operates. That’s often an experienced employee who’s been there for years. But his or her experience is only part of what will make the lift inspection program a success. There are a handful of tools—physical and material—that are also vital to making sure it gets done right.

The first part of any inspection is to look closely for corrosion in those nooks and crannies where parts fit together. Rust on painted parts not only looks ugly; it indicates that moisture is present under the paint, or in the gaps that weren’t painted. Corrosion not only thins the parts, but also reduces their fatigue strength. Substantial thinning might take many years, but the reduction in fatigue strength happens continuously. So: any rusted area should be repainted or sealed, to prevent moisture from getting to the metal surface.

We all know that operating machines make noises, and a good mechanic pays attention to those noises, listening for changes that indicate something is loose or broken. In particular, banging or impact noises are cause for immediate attention, since almost none of our equipment is designed for impacts—and the forces can be amazing. Whether that impact force comes from a poorly adjusted machine or from an under-educated worker with a large hammer, the result is tremendous mechanical stresses. Find the source and eliminate it.

After an observant inspector, probably the most effective single tool is the mechanic’s stethoscope. There are simple ones available for less than $20, and more expensive, and more versatile, electronic ones for less than $200. With a stethoscope, a technician can listen monthly to motor, reducer, pump, and bullwheel bearings. What he or she hears reveals a lot.

In ski area applications, ball and roller bearings almost always take many months between the first signs of failure and the final catastrophic event. Telltale sounds can be heard for at least a month before catastrophe strikes. (From what we’ve seen, even a bearing impacted by a lightning strike will usually run for a long time before the final failure.)

The first time listening to a bearing with a stethoscope is intimidating, because there is a lot of high-frequency noise. But that’s normal; as long as that noise is a steady “swish,” there is likely no problem.

• Listen carefully for any variations to that steady “swish.”cont.
• A slight high-frequency rattling noise is an early sign of a failure in the bearing. This noise is similar to what you might hear if you took a ball bearing, washed it clean of lubricant, and then shook it back and forth.
• Later in the failure, as more damage has occurred, the noise is lower in pitch, and might be described as “grumbling.”
• Irregular or changing noises are a sign of a problem somewhere in the drive system.
High-frequency rattling means the bearing needs relubrication now, and a spare should be ordered. A lower-pitched grumbling means the bearing needs immediate replacement. (Some bearings will “grumble” for weeks, but if the cage fails, the bearing will skid to a stop almost instantly.)

This bearing was damaged on installation, and had been “grumbling” for several months.

Sheave Wheels
With sheave wheels, the diagnosis is more difficult—we’ll talk about infrared scanners later. But the stethoscope can also hear them dying. The mass of the tower, the fit between the bearing ring and the tower structure, and the distance between the bearing and your safe access point tend to filter out high frequency noises from lubrication problems. But listening to the towers with a stethoscope, and comparing one with another, can usually signal failing bearings long before disaster strikes.

Bullwheels
With bullwheels, like the drive bearings, the noise should be a steady “swish.” On the bottom bearing, you might get a rhythmic beat with the drive gear-tooth frequency, but any other variation as the wheels rotate is cause for concern.

When there are questions about the coupling or drive on a lift, it would be really great to have a strobe light and be able to watch the motion in stop action. But one alternative is to take a cell phone or camera video, and then play it back in slow motion. Look for variations, like the wobble in a coupling that would indicate severe misalignment

Another very effective tool is to take a series of flash photos, with the flash acting as that strobe light. We used it on a machine that was running at 2100 rpm, and the flash was of such short duration that we could see every step of the action, including freezing water droplets in mid-air.

The applications are almost limitless. They range from detecting poor electrical contacts to leaking roofs to liquid levels in tanks and the location of a plug in a drain pipe.

Two useful maintenance applications are weekly scanning of the towers, to pick up dying sheave-wheel bearings, and the occasional scanning of V-belt drives, to see which ones are loose and slipping. A common industrial application is to scan the electrical feed line connections on critical motors—in the case of resorts, this might include the lines that feed the lift drives and snowmaking pumps, to see if the contact temperatures are elevated or unequal by more than 10°F (6°C).