Rewarding kids for good grades is a no brainer, but are we missing an opportunity to do more? 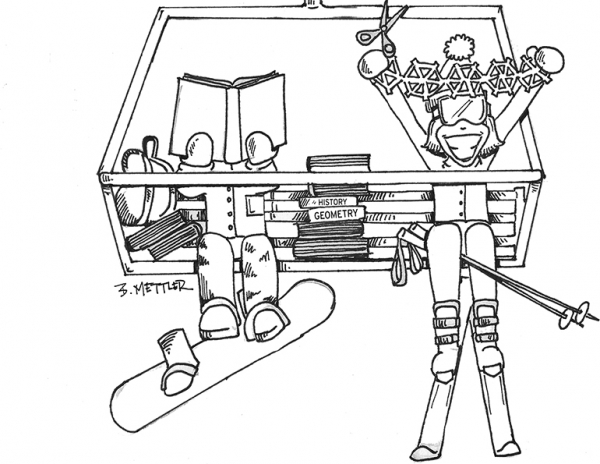 I was never a Whitney Houston fan. By the time she hit the scene in 1985, I already had a Bono-inspired mullet and didn’t want to hear anything from any band that didn’t have a U and a 2 in its name. But the most likely source of my disdain for Whitney was my kid sister’s pinballing around the house squealing “Greatest Love of All” into a hairbrush microphone. My teenage eyeballs rolled like a slot machine whenever I heard such un-avant-garde-ey lyrics like, I believe the children are our future/Teach them well and let them lead the way/Show them all the blahblah....blah...blah...blah./

These were not lyrics. Where were the suffocating metaphors? The overweight analogies??

Children? Children as our future??

Fast forward 30 years. Being in the ski business, we are forced to confront stark realities. And there is no reality starker than if we don’t get more people loving snow and surrendering to the magic that is gravity, our industry is toast. And there is no better population to sell magic to than children.

Of Skiers and Scholars

As best I can tell, Steamboat was one of the first resorts to recognize this. It began offering free lift tickets to kids 12 and under during the 1984-85 winter. (Around the same time Houston’s “Greatest Love of All” was released. Coincidence?) Other resorts soon followed, but their offers were always tied to some sort of purchase incentive: Buy an adult five-day ticket, get a kid’s five-day ticket free...Stay three or more nights and kids ski AND stay free. Offers were adult-centric and you had to buy something to get the kiddos in for free.

It wasn’t until the mid-’90s that the landscape shifted. The American Skiing Company in 1996(ish) began offering free season passes to kids who got straight As on their report card. This was marketing at its subversive best. There was the Captain Obvious angle: Hey kids, study hard and you can get a FREE pass. It was the first time the free-skiing carrot was dangled in front of potential achievers rather than purchasers.

But there was a less-obvious slant. Parents were now being incentivized to help their kids excel: Hey, mom and dad. Help little Susie get straight As and you don’t have to fork over a couple hundred bucks for a season pass. Market forces were being levered to increase alleged academic achievement. You didn’t need a credit card to get a pass—just a sterling report card. But what was way, way, way less obvious was the fact that this program, and the hundreds that have since followed, were out to not only protect the future success of skiing and riding, but also the success of our country. Bear with me.

It is just a wee bit of a stretch to think that some resort marketer had the future health of the United States in mind when he or she came up with the achievement program. But the parallels are clear: The success of skiing and riding rests with us infusing children with a lifelong love for sliding on snow. The future success of our country rides on us creating lifelong learners and instilling in our children an intense sense of curiosity and desire for knowledge. Intentional or not, achievement programs marry these two goals.

Many educators will tell you two keys to educational success and adolescent development are risk taking and resilience. Anyone who has fallen in love with the mountains and learned how to successfully slide down them has those traits spilling out of their pockets. And it works in reverse.

Confidence gained through overcoming adversity on the hill can translate into how adversity is framed and ultimately vanquished in the classroom. It creates mind space for a child to excel and a map for navigating the jungle that can be school. There is a flaw, though, in most resorts’ achievement programs, and it’s a bit ironic considering how the ski-and-ride business has evolved its own learning techniques.

It was not too long ago that if a learning technique wasn’t in the PSIA handbook, it wasn’t being taught on the hill. You could say that things were a bit, ahhh...rigid. Stem christies into perfect parallel turns were the metrics of skiing success. But as the freeride movement took hold, and its earliest disciples got a bit older and started to become heads of snowsports schools, those metrics got a bit more, ahhh...free.

“Success” became less about moving along some linear progression of boxes to be checked, and more relative to the individual and realizing his or her innate potential. The adventure of learning became more personalized. Removing the fear and anxiety of trying something new became paramount. Moving carpets replaced chairlifts in beginner zones and resorts started to create terrain-based learning areas that allowed newcomers to naturally check their speed, feel in control, and figure out how to move those new things strapped to their feet.

The short of it: The snowsports industry discovered that people learn in all sorts of ways, and it’s all about making them fall in love with the sport.
Schools are having a similar epiphany, and their teaching techniques are evolving as a result. Just as terrain-based learning (TBL) is reshaping how the industry turns a never-ever into a lifelong enthusiast, standards-based learning (SBL) in schools is redefining how a student is taught and their learning assessed. But the manner by which resort achievement programs award free season passes hasn’t kept up with this evolution.

The simple regurgitation of facts and the subsequent bequeathing of an A, B, C, D and/or F is slowly being replaced with a model that asks students to analyze, create, synthesize, evaluate, and extrapolate. The point of school is not memorizing and repeating, but practicing, applying and demonstrating in a variety of settings what one can do. The point is not what students know, but what they can do with what they know. It’s about transfer. And how a school records a student’s proficiency isn’t always fished from the alphabet soup of the old grading system.

The short of that? Maybe it’s time to move away from the simple straight-A threshold of awarding season passes so we’re not missing out on the chance to entice into our sport an entire population of kids who are excelling, but not fitting into the ABC box. We realized as an industry that we are the most successful when we create skiers and riders who can take what they’ve learned as beginners, practice those skills, expand on them, and ultimately transfer them to any situation they find themselves in on the mountain. It is these people who become lifelong skiers. Schools are now taking a similar tack to create lifelong learners. There is an opportunity now to reach a wider population of kids to bring into the world of sliding on snow.

Where There’s a Will

Many resorts already have programs with local schools where kids come up to the hill at least one day a week and receive discounted lift tickets, rentals, and lessons. What if we expanded those relationships and began having conversations with teachers on how achievement programs could be personalized? Create systems by which season passes are awarded to kids who reach individualized learning targets they have never before attained. Straight-A students should absolutely get a free pass. Kids need to bust their ass to get there. And an incentive by its definition sets a bar to be reached. But achievement programs can be broadened to award kids who teachers recommend for a free season pass based on consistent displays of learning. By having ongoing dialogues with schools, there’s also the opportunity to learn about kids who might not be participating in a mountain day-program, but who might benefit from the energy skiing and riding releases in a soul if only they tried our sport. Hooking these kids into snowsports would be a huge win.

It’s no mystery that participation in our sports has been declining. I haven’t bumped my head into enough moguls to think that skiing and riding can save the world, and I know there’s a constellation of other factors preventing people from giving either a try. It would be simplistic to think otherwise. But there are just about 55 million school kids in the U.S. right now. How we partner with schools, and rethink and expand the incentives we put in front of kids, will be key to our industry’s longevity. I guess Whitney was on to something after all.