Get ’em while they last: senior skiers remain an attractive and lucrative demographic. 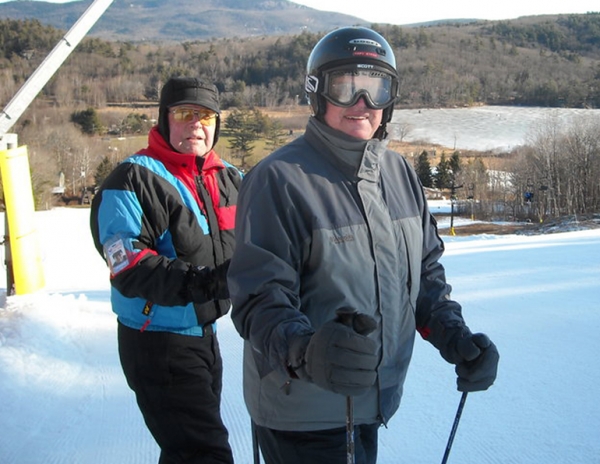 If you were a CEO or a VP of marketing and someone asked you for the attributes of the ideal visitor to maximize ski season revenue, your list would probably include a person who:

• is in love with skiing so you don’t have to spend marketing dollars to attract him or her;
• prefers to ski off-peak and/or midweek;
• skis more than the national average of 8.2 days per year;
• has the disposable income and inclination to shop at a ski area; and
• is willing to bring new skiers into the sport and/or encourage skiers who have dropped out to ski again.
That person is called a senior skier.
According to the NSAA Plan for Growth 2017, senior skiers represent 21 percent of the skiing population. That total population hit a peak just before the 2008 recession at 9.8 million, and has since dropped to 8.7 million for 2016-17 (Fig. 1). 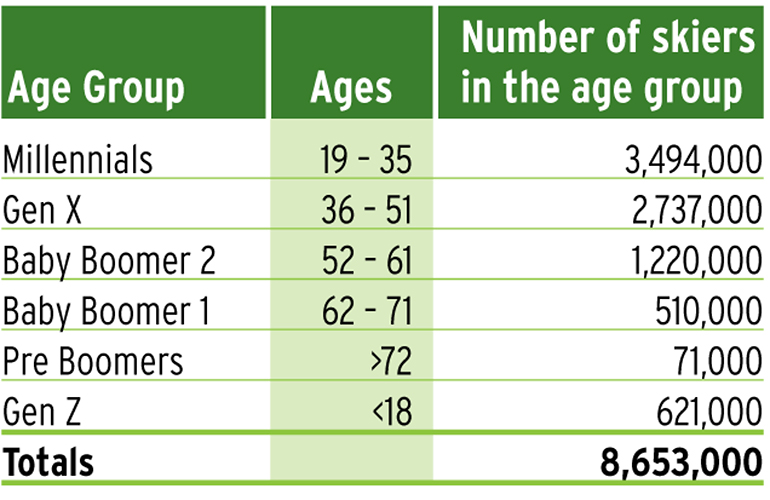 And older skiers ski more frequently than other adults. According to the Plan for Growth, the average number of days skied for ages 19 and older is 8.16. Baby Boomers 1 and 2 plus Pre-Boomers ski an average of 9.8 days a year. Put another way, senior skiers spend 20 percent more days at a ski area than the rest of the adult market.

Core Seniors
Core seniors are even more active. When the online publication SeniorsSkiing.com conducted a survey of its subscribers, respondents said they visited an average of six resorts each season. More than half (53 percent) said they skied 16+ days each season, and 34 percent reported they skied 34+ days a season. The average age of the survey respondents was 66. Surprisingly, only half of the group bought season passes.
When they are at their “home” resort, the publication’s readers say they spend an average of $100 a day, and when they travel either by car or airplane, they spend north of $200 a day. The per-day averages may be low because these skiers are taking advantage of discounted lift tickets.

n the other hand, 53 percent of the respondents buy lunch at the area, and 29 percent take a lesson.

As Lookout Pass’s Matt Sawyer says, “We loves senior skiers because they bring their friends and family.” Along with attractive daily lift ticket rates and season passes for senior skiers, the area offers a “Boomer Fridays” ticket: every Friday (but 2) during the season, anyone over the age of 40 gets a day ticket at one-third off. The area also has a Prime Timers Club for skiers over 55. It meets on Mondays, and membership includes a variety of discounts.

Bring Back the Lapsed Skier
We all know people who have left the sport that are still physically capable of enjoying it. As an industry we should be looking at ways to bring them back. Many left because they couldn’t afford it during their family- and home-building years. Others became former skiers because they don’t live near a ski area, or have a spouse or significant other who doesn’t like cold and snow.

Some ski areas have programs to bring the lapsed skier back to the sport. In addition, they can recruit senior skiers to become ambassadors for the sport we love. Many areas already encourage and incent senior skiers to bring a friend or grandchild as a way to swell overall numbers and keep the sport economically viable.

Some Ski Areas Love Senior Skiers
As a senior skier and part of the SeniorsSkiing.com team, the genesis of this article was to see what ski areas are doing to attract senior skiers, why they are doing it, and what benefits they reap. We surveyed a cross-section of areas ranging from large destination resorts (Snowbird, Sugarbush, and Alta); resorts close to metro areas (Mt. Hood Meadows, Nashoba Valley, and Powder Ridge, Minn.); and relatively small to mid-size ski areas (Solitude, Purgatory, Homewood, Ski Apache, Lookout Pass). In all, we interviewed senior marketing executives from 14 areas in California, Colorado, Idaho, Maine, Massachusetts, Minnesota, New Hampshire, Vermont, and Utah.

We found a wide range of senior discounts. At Vail, seniors get a less than 10 percent discount for walk-up, multi-day tickets. For example, five midweek days in January cost $665 for adults, and $615 for seniors 65 and older. In contrast, a midweek adult day ticket at Snowbird is $106; if you are over 70, the price is only $53—a 50 percent discount.

To get an idea of pricing for seniors and how senior skiers are defined by ski areas, take a look at the ticket prices pulled from ski areas’ websites in mid-October (Fig. 2.) 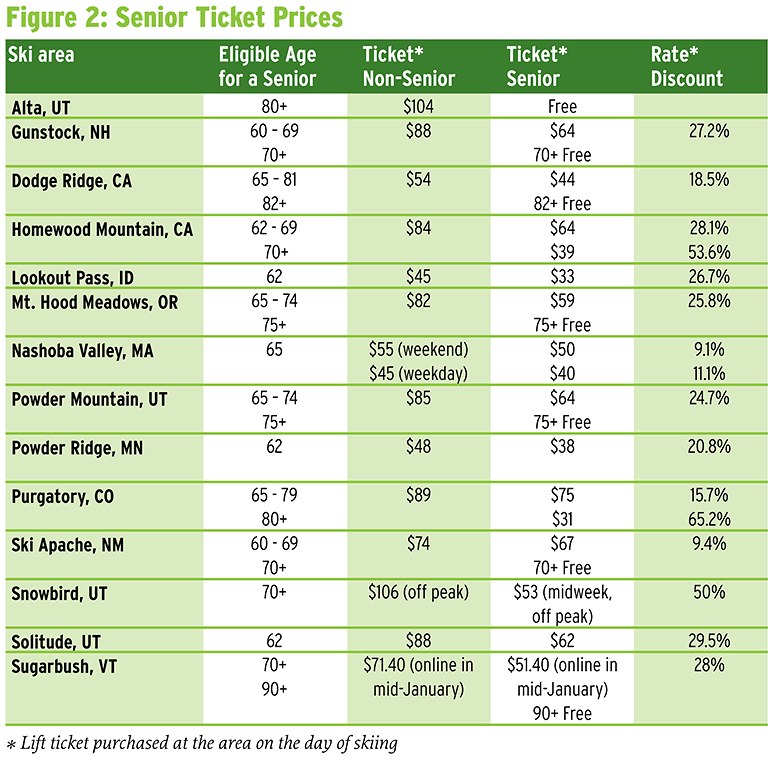 Buy in advance online, and the discount often increases. Almost all the areas interviewed increased the discount with age; the average age for free skiing is 74.

Jerry Wahlin from Powder Ridge, Minn., was quick to point out that the area “has many skiers in their 70s, 80s, and 90s! And, these skiers are not one or two runs and done. They ski for three of four hours a day or more, and stay through lunch.”

Price is a Key Discriminator
Resorts offer special pricing for seniors for two, related reasons:
• to help make it affordable
• seniors make decisions based on price

There are many senior skiers who, unless they have unlimited disposable income, will gravitate toward areas offering them a deal. Lower lift ticket prices equal more ski days.

That same thinking applies to season passes. Discounts on season passes for senior skiers, even those purchased close to the season, range from 20 to 60 percent. Our survey shows that senior skiers comprise an average of 10 to 15 percent of an area’s passholders.

Kim Oyler from Purgatory says, “Our goal is to make skiing affordable for all age groups, and the strategy works because we get lots of senior skiers, often with their extended families.”

Jean-Pierre Goulet from Powder Mountain in Utah adds, “We cap season pass and daily lift ticket sales for all groups, except seniors.” When asked why, his answer was simple: “They bring their friends and spend money at the area. It costs us nothing, and they are great ambassadors for the area.”

Senior Programs
Beyond special ticket pricing, though, some areas offer specific programs aimed at senior skiers. For example, Gunstock, N.H., offers Benefits for Friends. “BFF is an approach targeted at Baby Boomers and offers 50-percent discounts on rentals and lessons, and NASTAR is free to senior skiers,” says Gunstock’s Mike Roth. “We love senior skiers because they ski when others don’t.”

Homewood, Calif., offers a “3 Generation Pass” that includes two adults, one teenager and two senior citizens. For a modest increase, more family members can be added. Homewood’s Lisa Nigon believes the pass brings new skiers to Homewood, and also rewards those who grew up skiing the area.

Mt. Hood Meadows, Ore., offers a program that is one part ski lesson, one part mountain tour, and one part socializing. An instructor familiar with the needs of senior skiers—20 percent of the school has specific training in working with the older set—takes his group on a tour of the mountain, and then has lunch with the class. The thinking is that skiing is a social sport and if you make new friends, hopefully, you’ll return and ski together.

Dodge Ridge, Calif., has a Masters Program for skiers over the age of 50. This socially oriented two-and-a-half-hour group lesson and social event starts with a free cup of coffee. “Our guests asked for it because they want to ski as long as they can. Skiing is important to both their health and lifestyle,” says marketing and sales coordinator Adam Fox. “Not only do the instructors work on technique, but they also help senior skiers understand how the aging process affects their skiing, and how to adjust the way they ski.”

All the ski areas interviewed see the instructor-student relationship as precious. Mt. Hood Meadows’ Chris Kastner says, “Our senior skiing classes are vehicles to teach a senior skier how to comfortably ski and enjoy a mountain.”

PSIA assists in all this senior-specific teaching. Some regions offer additional “certification” for successfully completing classes focused on teaching senior skiers, others cover it in the regular certification program.

The Bottom Line
Why all the programs? Data show skier days and revenue from senior skiers have increased year after year. Senior skiers spend money at the resort and ski more than the average guest.

Perhaps most important, products and programs to attract senior skiers bring in revenue on days when ski areas want it the most—midweek, and off-peak. During times that have room to grow visitation, seniors can fill the void.

Marc Liebman was an associate editor for SKI Magazine in the 1970s. He was a racer in college; earned certification as an instructor in two countries; has run a ski shop; and as a business management consultant, worked with several ski areas. Currently, he is a novelist and contributor to SeniorsSkiing.com.