By almost any measure, 2017 was one of the most notable years for lift installation in the past decade. 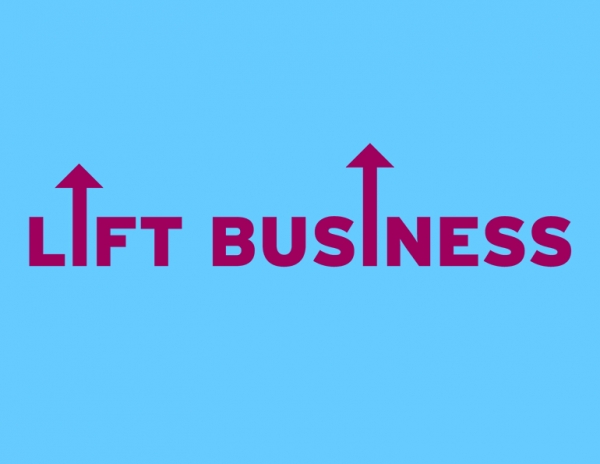 Resorts across North America installed more new lifts in 2017 than in any year since 2008, and the most VTFH since 2008 as well. The diversity of these lifts—from T-bars to gondolas—along with increasing use of loading conveyors shows how carefully resorts are considering the best ways to serve guests and maximize efficiency.

The greatest concentrations of new lifts were in the East and the Rocky Mountain regions. The 15 new lifts in the Rockies is the most for the past 10 years, fueled by four major installations of detachables at Vail Resorts’ properties in Colorado. Those lifts, plus new detachables at Copper—a quad serving beginner’s terrain—and a main access six-pack at Eldora, made Colorado the most active state this year.

The nine installs in the East matched the totals for 2008 and 2011, and included four T-bars. For certain locations and special uses, T-bars provide economical and wind-protected transport. New York State-owned Belleayre went the other direction, installing an eight-passenger Doppelmayr gondola that introduces the potential for significant summer operations at the area.

Increasingly, ropeways are becoming viewed as a viable option for non-resort applications. With installations at adventure parks, zoos, airports, and urban transportation centers, as well as several intended for year-round use at winter resorts, ropeways are proving their versatility and utility. And that bodes well for the success of the lift suppliers generally.

Comfort, Convenience, Capacity
Three of this year’s installs were gondolas. Aside from the one at Belleayre, the Yellowstone Club, Mont., installed an eight-passenger Doppelmayr gondola that opens new terrain, and Taos, N.M., installed a Leitner-Poma pulse gondola to connect its main base area with the children’s center. What’s up with these? Doppelmayr president Mark Bee says that gondolas are not exactly economical for most applications, compared to chairs, but make sense where lifts will see other-season use or lots of kids, who are less likely to fall from a gondola than a chair.

Not surprisingly, the Yellowstone Club epitomizes this year’s convenience installations. Aside from a gondola, the resort also installed a Doppelmayr detachable quad bubble lift (see cover).

While Doppelmayr led with the greatest number of installations, Leitner-Poma’s installs had the highest VTFH. That VTFH figure is boosted by the five high-speed six-packs the company installed. Three of those six-packs were major lifts at Vail Resorts properties: Vail, Breckenridge, and Keystone.

“We had a really big year, biggest for the new factory,” says Leitner Poma of America sales manager Jon Mauch. That included a range of unusual installations, both in resorts and elsewhere. “That shows our global strength,” he adds. “We can use product knowledge from all locations to come up with these best solutions for our customers, not just promote a particular product line.”

Among other suppliers, Skytrac installed five lifts this year, four of them fixed-grip quads. Partek installed a fixed quad at Mt. Peter, N.Y. Carl Skylling of Skytrac notes that financing remains the major issue in lift installations, especially for smaller resorts. “Customers are looking for options,” he says.

One option is a used lift. As always, a number of resorts installed relocated and re-engineered lifts. Skytrac had three such installs; Skytrans had one, at Waterville Valley, N.H. The resort relocated a double chair to its new Green Peak pod; Skytrans handled the various upgrades to the lift and its installation.

Conveyors on the Rise
Conveyor lift installations also jumped in 2017, to 61—a roughly 50 percent increase from the past five years, and the most since the 61 installed in 2011. Pete Kavanagh of Star Lifts says he is most encouraged by the number of smaller and mid-sized areas that installed their first conveyors to transport beginners. Jennifer Kelly of Magic Carpet also noted that most of the carpets this year serve that purpose, too. Both suppliers also report that resorts continue to install conveyors for tubing as well.

The large number of loading conveyors installed this year is perhaps the greatest indicator of the trend toward increasing guest convenience where lifts are involved. Chairkit installed seven, nearly doubling the number from 2016. Marc Wood of Chairkit says that demand has been fairly steady, and the number of detachable six-packs helped boost the numbers for 2017. After being in the market for a decade, he says that loading conveyors are now an accepted component of lift installations, catching up to the European market in that regard.

Mark Bee agrees. “We’re putting in three or four a year now; we didn’t put any in 8-10 years ago. People are seeing the benefits. Lower ramp maintenance, takes that out of the equation. And it simplifies loading,” he says.

The number of conveyor suppliers has grown, too. Beyond Magic Carpet, Star Lifts, and Chairkit, Team Service Carpets had five installations this past year, and LST Ropeways had two, both at Waterville Valley, which is revamping several aspects of the beginner experience. LST also installed a T-bar at Waterville Valley, one piece in the resort’s carefully budgeted expansion. 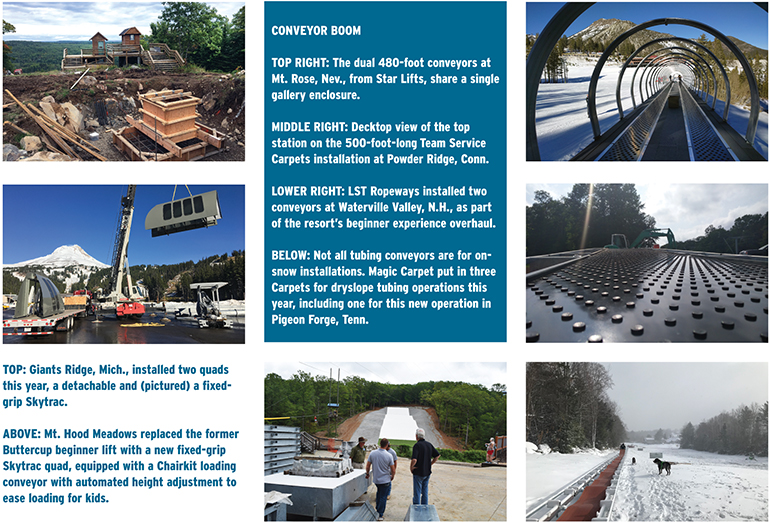 Ropeways Far Afield
Beyond the installations at winter resorts, aerial lifts and loading conveyors are becoming more numerous at other locations as well. Several conveyors, for example, have been installed for summer and artificial surface tubing operations, from Branson, Mo., to Bridgerland, Utah.

Both Doppelmayr and Leitner-Poma had installs in Gatlinburg, Tenn., gateway to Smoky Mountain national park, the busiest national park in America. Boyne Resorts replaced its iconic Skyride with a new, retro-styled Doppelmayr triple; the former Skyride was destroyed in a massive wildfire in late 2016. A new-concept adventure park in Gatlinburg, Anakeesta, installed a one-of-a-kind Leitner-Poma pulse telemix (combination of chairs and gondola cabins). “We may never sell another one like it, but it was the right solution for that location,” Mauch says.

The same is true of the Leitner-Poma gondola at the Salesforce tower in San Francisco, which connects the building—the tallest edifice west of the Mississippi—to San Francisco’s main transit center in the city. The lift runs automatically, without an operator, much like an elevator. It’s unique architecturally, too: the 25-passenger cabin is glass from floor to ceiling.

On a smaller scale, Skytrans installed a new chairlift at the New York State Fair in Syracuse.

All these novel installations point out the versatility and efficiency of ropeways for many transit needs. As the rest of corporate and public America discovers the utility of ropeways, this helps ensure the viability of the industry’s suppliers. And that’s good for everybody.

A Look Ahead
Both Leitner-Poma and Doppelmayr are offering new products, and that, too, could fuel more activity in future years.

Doppelmayr’s new D-Line of chairs, introduced in 2015, focuses on increased comfort—“first class,” as the company puts it. That involves wider, plush seats and a variety of restraint bar options. Though the D-Line is still relatively new, it accounts for about a quarter of Doppelmayr’s 2017 installations, Bee says. And, despite this being a bit of a premium product, he expects it will become three-quarters of the mix in two years. “It may become our only product,” he adds.

One potential innovation: Doppelmayr has developed a new rectangular terminal enclosure that echoes the Apple Store: it’s all glass, and it’s possible to turn one side into an electronic billboard—a 12-foot by 80-foot LCD screen billboard. Bee says the company has prototypes of the enclosure, though no resort has ordered one yet.

Leitner-Poma is touting the performance and operating cost advantages of direct drive motors. “Direct drive has generated a lot of interest. We’ll have several installs with direct drive next year,” says Mauch.

Direct drives have their advantages. Because they operate at the speed of the bullwheel, there are no high-speed units in the drive. There are fewer issues with the gear box, and no oil changes. They are very efficient. And they are quiet, so they are a good option for lift terminals located near restaurants or lodging.

Both companies also report strong interest in new lifts for 2018, while cautioning that a lot depends on business this year and general economic conditions. “We have a couple of projects in the pipeline now, so I’m optimistic,” says Bee.

Leitner-Poma’s Mauch is optimistic, too. “We have a number of early orders, more than in the past,” he says. “Even a few for 2019. Resorts that plan ahead allow us to fill in slower times in the factory and hit a lower price point.” 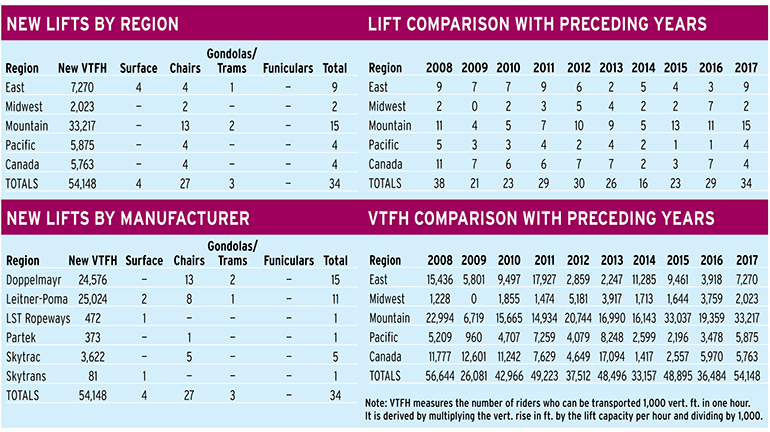