Getting With The Program

All chairlift mechanics in Ontario must be certified through rigorous training and testing, and there are no exceptions. How's that working out? 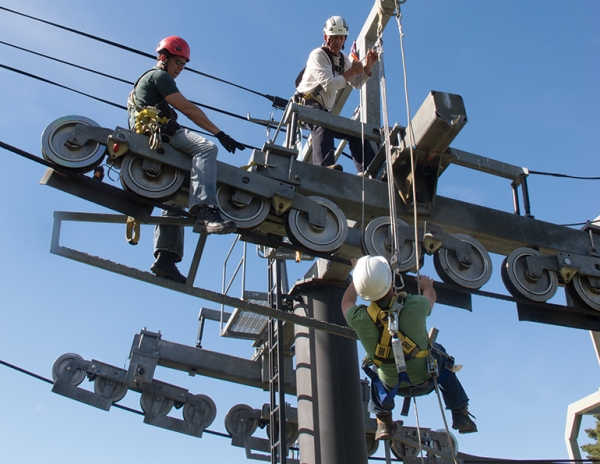 Training for lift mechanics in Ontario can include on-site experience at a variety of different operations so trainees can see how different lifts work.

In the wake of a few lift failures during recent seasons in the U.S., formal lift maintenance training has become a hot topic. How feasible is such training, though? The province of Ontario provides some clues. It has about 16 years of experience with legislated ski lift mechanic certification and aging lift maintenance standards. There have been some curves in the road, but the combined efforts of the province’s ski industry and its regulatory body have provided an environment where ski lift safety is paramount. There are lessons in this experience for other jurisdictions across North America—and for those who would care to use them, templates for implementing a standardized training/certification program.

Ontario has been regulating elevating devices since the Elevators and Lifts Act in 1953 and the Construction Hoists Act in 1960. Owners, and contractors who install and/or maintain elevating devices owned by others, have been licensed in Ontario for more than 50 years.

Twenty years ago, in May 1997, the responsibility for presiding over standards related to a wide range of products and devices, including ski lifts, was transferred from a government body to a private, not-for-profit corporation, the Technical Standards and Safety Authority (TSSA). It was to be self-financing through the collection of fees for the approval and inspection services it provided, removing the costs of these activities from the government’s books.

Developing the Rules
Currently, the TSSA is responsible for administering the certification of occupations regulated under the Technical Standards and Safety Act of 2000, including lift mechanics. The TSSA works with the Ski Lifts Advisory Council (SLAC), a forum through which TSSA consults with industry on safety strategies. In addition, to help ensure that all certification programs are responsive to industry needs, TSSA also works with a Training and Certification Advisory Board (TCAB). Comprised of industry representatives, the TCAB for ski lift mechanics assisted the TSSA in developing training standards and provided input into the certification policies and procedures for the licensing of ski lift mechanics.

The grandfathered mechanics’ licenses expired December 31, 2003. TSSA then directed all provisional certificate holders to challenge the Phase 1 and Phase 2 provincial examinations, which had been developed by the authority with input from TCAB and industry partners.

The Phase 1 examination covered the regulatory and legal framework for elevating devices, including passenger ropeways and conveyors—specifically, the TSSA Act and Regulations, Code Adoption Document, CSA Z98 Code (similar to ANSI B77 in the U.S.), and TSSA Directors’ Orders. The Phase 2 examination assessed candidates’ practical knowledge of lift functions, operation, and maintenance of passenger ropeways and conveyors.

Regulatory Challenges
Recruiting and retaining ski lift mechanics can be challenging. It takes a lot of time to complete certification-training requirements and keep up with the changes in documenting training. Plus, there is a limited pool of licensed ski lift mechanics, and the pay rates for ski lift mechanics in Ontario leave something to be desired. Many current ski lift mechanics feel that for all the time and effort put into obtaining a license in Ontario, it should be more easily transferable between provinces, and have a pay scale more in line with other licensed trades.

Further, as the documentation of training in the SLM-T skills passport changes, mechanics are challenged with managing both old and new passport forms. The TSSA does currently accept transfers, with certain provisions (exam and arguments to prove competency), toward Ontario licensing from other provinces. The ski lift mechanic license ensures a base level of skills and competency, and allows individual mechanics to work on ski lifts in Ontario.

And finally, many of the original “grandfathered” ski lift mechanics have either retired or are nearing retirement, so resorts are developing succession planning for mechanics.

Developing a substantial number of certified mechanics has not been easy. After an initial flurry of SLM-T’s signing on as mechanics in training, the numbers of mechanics achieving full SLM-A or SLM-B certificates have not been increasing. Currently, there are approximately 385 certificate holders in Ontario. This number has been relatively constant since the introduction of licensing.

Since 2005, more than 60 SLM-T’s have taken Georgian’s 42-hour college credit course. Developed by SRO coordinator Rob Butler, the course is delivered over seven days, five of which are full eight-hour days, each one at a different snow resort. With this format, SLM-T’s benefit from seeing how different resorts install, operate, and maintain a wide variety of lift types. In addition, they spend considerable time learning to understand and navigate through the various laws, regulations, and code, which apply to passenger ropeways and passenger conveyors in Ontario.

“By offering the course in this format, we make it possible for SLM-T’s to join the regular students in our program and to earn a full college credit,” Butler says. “Feedback has been very positive. Getting to see the lifts at various resorts is extremely helpful, they tell us. Plus, they really appreciate our efforts to make the various laws, regulations, Code Adoption Document and Z98 code understandable to them.”

SLM-T’s write two tests each day, plus a final exam to prepare for the TSSA examinations. Experts from the industry are recruited to teach these courses and, like Butler, are all members of the TCAB.

Approximately 100 SLM-T’s have taken advantage of the one-day courses since 2005. Georgian College programs have introduced many ski lift mechanics to the industry in Ontario, and assist resorts to recruit new mechanics.

Content for the training has been developed by members of the TCAB and the SLAC. The training will consist of two hours of act, code, regulations, and safety updates, and two hours of technical materials. Training sessions will be delivered at OSRA conferences, regional locations as required, and online if necessary.

When the continuing education requirements come into force, an applicant for a certificate renewal must receive the continuing education training through an accredited training provider prior to the expiry of his or her certificate. If a mechanic fails to renew his or her certificate before it expires, that person is not allowed to perform the functions of a mechanic until meeting all renewal requirements within 12 months of the expiry date.

Aging Ski Lift Reviews
Ontario has also moved to regulate the maintenance of aging lifts. As lift manufacturing consolidated in the 1990s and some suppliers exited the business, the TSSA and OSRA reviewed the status of lifts in Ontario and identified gaps in manufacturer support for orphan lifts. While not the sole reason for developing review procedures for aging lifts, consolidation factored greatly in the decision to implement a program of Aging Ski Lift Reviews.

In consultation with the TSSA’s Ski Industry Advisory Technical Committee, Director’s Order 169/02 Rev. 1, was developed and issued in 2002. It calls for all above-surface ski lifts and passenger ropeways to undergo regular engineering reviews and assessment to ensure operational safety “in accordance with guidelines set by the director.”

Essentially, the program means that all critical moving and fixed components must be subjected to non-destructive testing. Lift components that are exposed to fatigue and corrosion must also be inspected. These reviews require licensed ski lift mechanics and engineers to perform all tasks mandated by the review.

This has had major consequences, leading operators to move lift operations more to the forefront of resort management. The requirement for engineering reviews has increased lift maintenance budgets significantly. Many resorts schedule major alterations to coincide with initial and subsequent five-year reviews. Resorts with multiple lifts have attempted to schedule the periodic reviews over several years to avoid having unmanageable workloads trying to complete multiple reviews in the same year.

To try and limit one aspect of the costs, the TSSA has capped the engineering fees for a periodic review at $6,500 CDN. In addition, OSRA and the TSSA worked together to develop and institute an annual safety checklist that assists operators and ski lift mechanics in completing off-season maintenance tasks. TSSA lift inspectors review these safety checklists when they perform their inspections. However, there are still significant NDT testing, labor, and material costs that accompany a review.