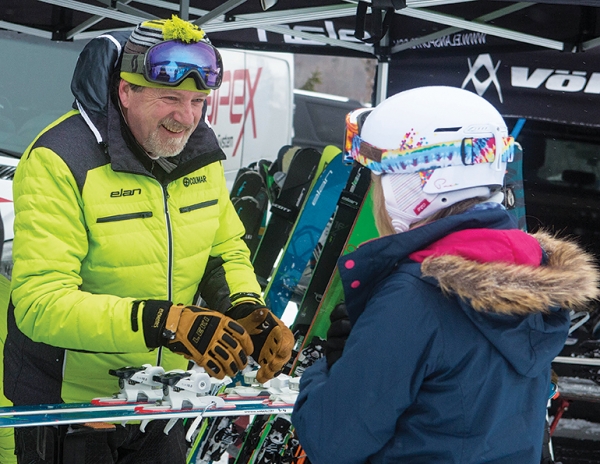 For more than 40 years, Bill Irwin has been on a mission to convert beginners into lifelong enthusiasts. He started as an instructor and PSIA examiner, instructing the instructors. But his most significant contributions to the industry came on the equipment side—rental skis and boots, in particular. As he says, “Unless you’re getting people on the best equipment, you’re losing the effect of all the other conversion efforts.”

Working for Elan, Irwin was a part of developing and introducing some of the biggest innovations ever to happen to ski rental equipment. From the introduction of shaped skis at ski schools to developing systems that simplified the rental experience, his impact on ski schools and rental shops—and beginner conversion—cannot be overstated. And that is why he is a Trailblazer.

SAM: How did you get started in the ski business?

Bill: I grew up in a skiing family in Buffalo and every weekend we would drive 200 miles up to a small ski area called Snow Ridge, in the snowbelt. In my college years in 1973, I started teaching skiing at Parkway Ski Area in Utica, but I began serious teaching at Snow Ridge in 1974-75 and got certified with PSIA during that tenure. In 1975, I began teaching at Sugarbush (in Vermont), where I worked my way up to assistant ski school director (becoming an examiner in 1986).

SAM: How did you end up focusing on rental gear?

Bill: As an Elan skier, they sent me test skis (at Sugarbush), and I got my first chance to test shaped skis in 1993. We introduced the SCX into rentals as a teaching aid and had instructors fill out reports. That’s how I started with Elan, with the ski school program. Dealers weren’t paying attention—they weren’t attracted by skis that were so short and weird looking. It was too different, too new.

So the idea was to get ski schools excited about it. The big break came when Les Otten (who had recently bought Sugarbush) decided to bring the SCX to all American Skiing Company resorts. We became the exclusive ski for all Les Otten resorts. Then he wanted to take it a step further—to encourage people to purchase the skis. We had a purchase program, and rental started to blend into retail. We sold a record number at ASC resorts, and it created a demand way beyond expectations. Other resorts got interested and introduced similar programs. The national media went crazy—Newsweek, Playboy, Good Morning America. Other ski companies had to respond. So the world was introduced to shaped skis through American ski schools. It changed the industry.

SAM: What are the biggest changes you’ve seen in the rental business?

Bill: The introduction of shaped skis, of course, is the biggest story. But going from selling the least expensive gear you could into rental shops to shops becoming more demo centers for new technology was another big one. You now have access to a cross section of manufacturers and models when you rent. You hardly saw that before the advent of shaped skis.

Also, the change in the length of skis, looking at what beginners really need. That’s been a silent, very big revolution—putting short, shaped skis on beginners. Les and I talked about the Graduated Length Method and asked: Why don’t we do this with shaped skis? It was one of the most exciting projects of my career. He wanted it all within two weeks, but you know how long it takes to produce a new ski. So I took junior skis and added lifter plates—racing plates—onto 10 pairs of 110cm, 120cm, and 130cm junior skis, and those were our initial test skis for a GLM-style beginners program. The concept began quickly. And ASC shifted all their beginners to 110cm, 120cm, and 130cm skis. The lifter plates allowed the beginners to tip the skis more easily. Over the years, the GLM concept somewhat faded, and 130cm became the template for the beginner ski.

SAM: How much were you involved in Dalbello’s limited-sole-length concept?

Bill: I joined Dalbello to introduce the 4Factor program, and one of the great joys of my career was developing new boots. When Elan and Dalbello joined forces, we were trying to match the ski with what we were doing with the boot-binding system. We were looking at improving on what Head was doing; Head had come out with its BYS system the year before. Essentially they were putting in toe blocks so that they could use the same boot for four sizes. We wanted to make true-lasted system boots and do something with the binding. In the beginning, Head’s system was with a fixed toe in three colors. I said: Why couldn’t we take an existing Tyrolia binding—same idea as Head—and use an adjustable binding, giving you the option to use any boot from any manufacturer?

So the battle lines (between Head and Dalbello) were drawn, with two different philosophies going at it. We wanted to design a better boot. The same year, we were selling a four-buckle boot (the MX), the first time a company had come in with a four-buckle rental boot. Rear-entry was still king at the time. We decided to use independent molds for all 12 sizes, so each boot would be true-lasted.

That was a very expensive project, and no other company was willing to invest that kind of money. You had to sell a lot of boots at $100 a pair to pay that back. But we did, and it paid back in dividends.

SAM: What are the biggest mistakes you typically see resorts making when it comes to rental gear?

Bill: Resorts buying rental equipment should be focused more on performance. Unfortunately, too often it boils down to brand loyalty. Resorts will get a deal because of the name of the company and not the performance of equipment. Not enough resorts get out to test gear before buying. I have been so involved in the conversion effort, in getting skiers to come into the sport and staying in the sport. I see the equipment that beginners get on as being absolutely crucial. Unless you get people on the best equipment—boots and skis—you’re losing the effect of all the other (conversion) efforts.

SAM: How will the current resort consolidation trend impact the rental market?

Bill: It is creating the potential for big contracts (for conglomerates) with the lowest-bidding companies. Conglomerate resorts have to beware of not slipping to inferior products just because one company offered them a better contract. It has become like an auction. Smaller areas might actually have an advantage in being able to offer equipment better set up for beginners.
SAM: What trends do you see shaping the rental market?

Bill: A big thing is what’s happening with the process. A lot of the focus of rental buyers at the (trade) shows was looking at ways to make lines move and how to manage that flow more quickly, more efficiently, and with higher guest satisfaction. The fitting of the rental gear in the shop—that’s going to be the focus in the next few years. Boot bridges, or fitting bridges, that can accommodate ten skiers or more, where the techs are on seats at eye level fitting the boots, are proliferating. Because the ski fitting takes less time with systems, it allows more time for the boot fitting. Then the computer systems all tie into this. Enter Wintersteiger. They’ve come out with an electronic system that measures the foot. The guest steps onto a platform with all kinds of scanners, producing, within 30 seconds, a complete printout of the foot. It’s a huge timesaver.