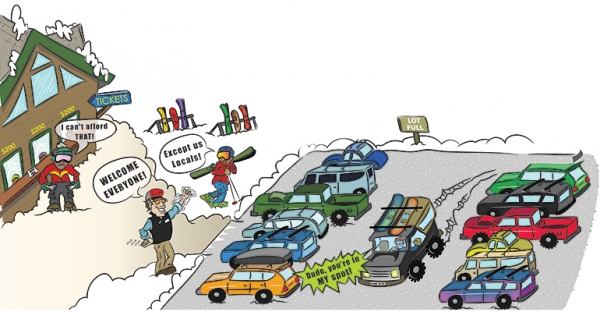 The first sign that something different was happening came in mid-November. It was the weekend of the Colorado Ski & Snowboard Expo in Denver. Early-season snow and snowmaking allowed nearby Eldora, owned by Powdr and an Ikon partner, to open with superb conditions. Shockingly, hordes descended on the area, overflowing the parking lots.

Eldora identified the culprit immediately: partner passholders, Ikon and otherwise. The area was sufficiently alarmed that, within a few days, it announced a new parking policy. On busy weekends, cars with less than three people would be charged $20, and the area offered free bus transit for those who parked in Boulder, 30 minutes away.

The backlash was immediate. Eldora passholders accused the area of bait-and-switch tactics, making a change after people had already bought their passes. The area quickly rescinded the policy, and ski life went more or less back to normal.

The New Normal
But it wasn't really a normal season. This was just the first of many episodes that rocked resorts this winter, as a combination of strong snowfall and widespread pass ownership and partnerships brought skiers out in record numbers for many areas. That led to reports of crowding, much of which was blamed, accurately or not, on the Ikon pass.

By January, rumbles were getting louder, both on social media and on the slopes. "No Ikon" bumper stickers began to appear. Ikon passholders found themselves berated by locals. The ire stemmed from several sources: crowded slopes and traffic jams on resort access roads, exacerbated by knowledge that Ikon passholders often paid less than the locals did at "partner" areas.

While the passes surely played a role in the burgeoning crowds, so did snowfall. The Jackson Hole News & Guide noted that, as the resort careered toward a record 700,000 skier visits, Ikon passes accounted for about 100,000. Locals tallied 300,000. In Aspen, Ikon passholders were 9 percent of visits, and visits overall were up about 20 percent from the previous year. But local season pass use was up a whopping 40 percent. Still, locals widely blamed Ikon for the perceived crowding.

A similar story unfolded in Utah, where visits were up at Ikon resorts and partners such as Solitude and Alta, and locals grumbled about how quickly powder got tracked out and how long the traffic jams had become. The 20-minute ride up Little Cottonwood Canyon to Alta and Snowbird, and up Big Cottonwood to Solitude and Brighton, grew to two hours or more on weekend powder days. Tempers flared and frustration grew. And again, it was Ikon passholders who received the blame.

The onhill road rage boiled over at Deer Valley in March, when one skier blocked another from getting into the liftline. The two—both in their 50s, one a local resident and one a destination visitor—argued on the spot, then carried their argument onto the run down, culminating in a fistfight that resulted in police intervention after ski patrol separated the brawlers. Season's passes were not implicated in the battle, but it seemed a fitting end to a contentious season.

Social Outcry
As social media revealed, the animosities exposed by this past winter run deep. Some telling posts we spied:

'Between the places that charge too much for too little, the veteran skiers who feel they've earned the right to be dicks, and the Jerries that don't pay attention to the code and ski out of control or out of their ability level, and the cost of travel ... it's increasingly difficult to justify finding time to get away to go somewhere mainstream."

It seems unfair to charge one person $2,000 for a pass and 70,000 people show up to ruin it. That's all it comes down to. Ripping off the locals who thought that their hard-earned $2,000 was going to have similar value to when they bought it last year. Instead. Totally different. Now all the lifts are jammed all the time. ... Locals are all recipients of a bait and switch tactic none of us expected from the resorts. Thank a ton."

"I moved to Utah and have an ikon pass. I suggest everyone should do that. It's awesome! So deal with it, locals. I'm part of you now!!!! Mwahahahaha!!!!!"

"I have already seen 🚫Ikon stickers around and had a local ask a lift full of people, 'Are you on the Ikon pass, I am a local.'"

"Cry me a river. The mountains aren’t just for the locals. As a Floridian, the Epic Pass is the only way I can ski as much as I do. I’m sorry that inflation is hitting your ski towns, but that’s capitalism. If you don’t like it, you can leave."

"It's become very clear that none of the resorts involved in the Ikon Pass planned for the increase in skier visits (30 percent increase seems to be the norm) and now they are feeling the backlash. To all the GM's, remember that actions speak louder than words. ... [offer] premium parking to local pass holders, or host a locals reception etc. Otherwise you'll be feeling the impact of local pass holders exploring other options."

The Response
Amidst the noise, a response was brewing.

On Feb. 18, Arapahoe Basin COO Alan Henceroth published an open letter that said the resort would end its season pass partnership with Vail Resorts starting in 2019-20. “While the mountain still has plenty of room for skiers and riders, the ski area is feeling a pinch on parking and facility space. Due to these constraints, Arapahoe Basin believes its staff can take better care of its guests by separating from Vail Resorts,” Henceroth wrote.

A-Basin regulars, who had been vocal about the crowds as the resort’s popularity grew, applauded the decision. Still, it wasn't just Epic Passholders who were responsible for the increased traffic. A-Basin has invested more than $40 million in capital improvements in the last 15 years, and this winter it opened more than 460 acres of new terrain, which were also factors.

Some unaffiliated ski areas were making moves of their own, perhaps to capitalize on the angst and draw some fed-up passholders to their mountains. For example, Mt. Rose, Nev., introduced the Double Down Pass on Feb. 14—FEB. 14!—which included the remainder of the 2018-19 season and all of the 2019-20 season. A week later, Monarch Mountain, Colo., made its 2019-20 season passes available, with the rest of the current season included, too.

Using next year’s pass for a couple weeks of the current season is not a new concept. But for Monarch and Mt. Rose, new passholders could get an extra two MONTHS of access on next season’s pass.

And other offers emerged, such as Grand Targhee’s “Escape the Masses with Season Passes” promotion, aimed directly at passholders from any resort or those with “a conglomerate pass (Ikon/Mountain Collective, etc.)” to get a sweet deal on lodging and lift tickets. No beating around the bush, there.

Leaders Say to Locals: Chill
Despite accounting for a bulk of the crowds, locals at several resorts maintained their NIMBY stance, and went from kvetching on social media to, in some cases, pulling full-on campaigns against Ikon passholders, bumper stickers and all. It got so bad that some resort leaders pushed back.

On March 6, Big Sky Resort GM Taylor Middleton addressed the locals' hostility in a letter published in the local newspaper. It was titled: “Be Kind to Ikon Pass Holders.” His tipping point seemed to be a social media post by an offended Ikon passholder who said, “At Big Sky they were selling bumper stickers saying, ‘IKON[not]wait for you to leave’ …” In the letter, Middleton implored locals to welcome news guests with open arms, just as he was treated when he moved there. He noted that while more people means longer lift lines, etc., their spending makes Big Sky a more livable place.

Similarly, on March 12, Jackson Hole president Mary Kate Buckley penned a letter in Jackson’s local rag, admitting that her first season as the resort’s president has had “some highs and lows.” Chief among the highs was record snowfall. But with record snowfall comes “crowds that are straining our infrastructure, employees and locals,” she wrote. In response to rumors attributing increased crowds solely to the Ikon pass, she said JHMR signed on as an Ikon pass partner because it feared visits would have dropped to an unsustainable rate if it didn’t. In all, visits were up 11 percent at the time, with locals accounting for 39 percent of total visits, and Ikon 16 percent.

Buckley said the resort was working with local businesses and associations to devise plans for better parking, transportation, and additional workforce housing to help mitigate traffic and other issues. She asked locals’ patience and to demonstrate “our best as a hospitable and extraordinary community.”

Three days later, Aspen Skiing Company CEO Mike Kaplan followed suit with a guest column of his own in The Aspen Daily, acknowledging that this winter had been more crowded than others, but adding, “great snow brings skiers.” He cited the drastic increase in local season pass usage compared to Ikon pass usage overall, and put his foot down when it comes to how locals are treating those who own this new product. “I implore the community to engage in some serious self-reflection. …The mountains are open to all, and everyone on them deserves respect,” he concluded.

Kaplan also said the new visitation patterns were a bit unexpected, and the company was working on solutions, even saying it would abandon the Ikon pass if it doesn't for them in the coming years. In the meantime, SkiCo would explore making other tweaks, to Ikon and more.

Tweaks Made
As of press time, both Aspen Snowmass and JHMR have responded to the local Ikon uproar by essentially telling locals, “If you can’t beat ’em, join ’em.” Starting in 2019-20, the unrestricted single-area season passes at both resorts will include an Ikon Base Pass as well. It’s a move to give locals more value—but funny, too, because these folks are now going to own a product they’ve badmouthed all season. It’s like being a Yankees fan and owning Red Sox season tickets.

Another notable change is Vail Resorts’ new “Epic for Everyone” campaign, anchored by the Epic Day pass. This product is aimed at day ticket purchasers who don’t ski enough to warrant buying a season pass. It can be purchased with one to seven days of lift tickets on it, with options to include holidays or not. The more days included on the pass, the steeper the discount—up to 50 percent off the window rate—and the more mountains passholders have access to.

It’s a bit of a pivot for Vail, but still follows its general strategy of locking people in early (Epic Day passes are available for advance purchase only.). If other resorts follow suit with similar programs, this new option could bring yet bigger crowds.

These tweaks show that resorts are listening, and want to provide value and a good experience for all. But, of course, you can’t make everyone happy. As this past winter illustrates, major changes come with unpredictable consequences, for better or worse. The ability to respond to those consequences swiftly, smartly, and conscientiously is essential.