A variety of useful gear, apps, and software can add to the risk management toolbox. 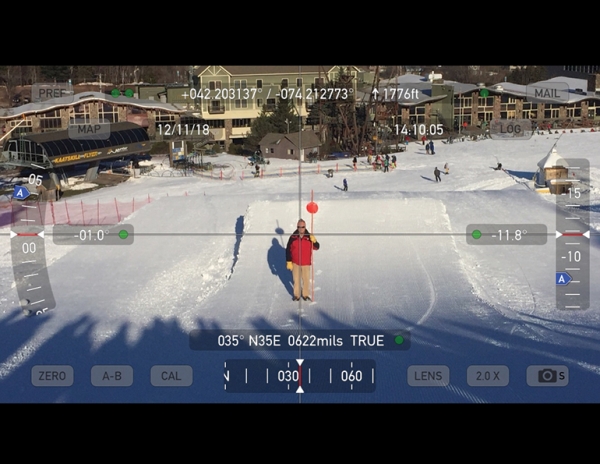 The Theodolite app can capture a great deal of information in one image.

Over the years, I have performed literally hundreds of post-incident investigations on various types of incidents (lift-related, collisions with fixed objects, terrain park incidents, slip and falls, etc.) and have seen a number of tips, tricks, and tools used to present evidence. In recent years, new technologies have made it possible to perform these investigations more quickly, easily, and most importantly, accurately and precisely. Best of all, these tools are readily available for all to use.

Being both accurate and precise is important in the post-incident investigation process and in the final work product. Accuracy refers to the “closeness” of a measurement to its actual (real) value. Precision, on the other hand, refers to the regularity of obtaining the same result frequently, or in other words, how “reproducible” the results are.

While there are myriad, very complex, and often expensive instruments that forensic specialists have used in mountain resort incident investigations, we will explore technology that is:
1. available to the masses,
2. inexpensive (relatively), and
3. relatively easy to learn how to use and use effectively.

These tools fall into two categories: those used in the field to measure and/or preserve evidence and data, and those used back at the office to memorialize and present the evidence and data.
Some of these field tools have come out of science, engineering and/or surveying. However, some have come from my experience as a hunter. Laser rangefinders and apps such as onX Hunt are two examples. More on them shortly.

1. Smartphone. My go-to in the field investigation tool is my smartphone, loaded with several specific apps. I happen to favor the iPhone (currently, an XR), as I am an Apple guy, but phones using the Android platform work just as well.

From a technology perspective, I really can’t do much better than the technology contained in this one device, especially performing on-mountain post-incident investigations in challenging lighting and environmental conditions. Phones using the Android platform achieve similar, or in some cases even better results.

As for apps, several are must-haves: 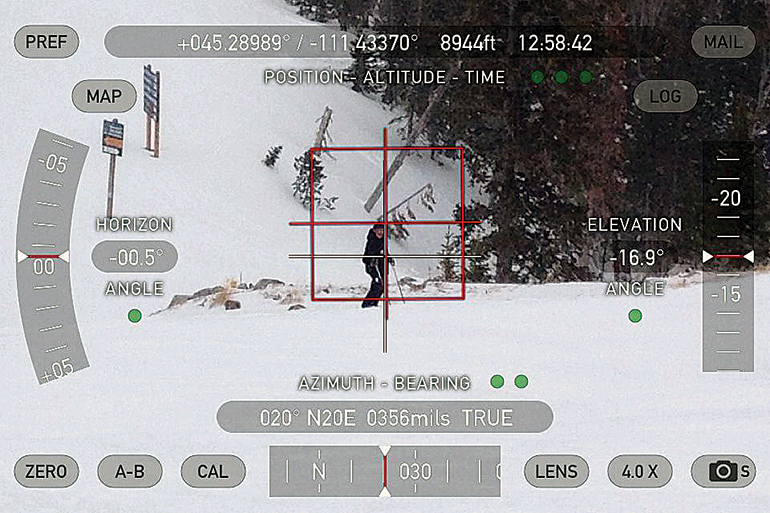 Theodolite neatly memorializes an incident site image and related data.2. Theodolite. Introduced in 2009, Theodolite is a multi-function viewfinder that combines a compass, two-axis clinometer, rangefinder, GPS, map, nav calculator, and geo-overlay photo/video camera. Until just recently, Theodolite was only available for iOS (iPhone and iPad) at a cost of $5.99, but there is now an Android version (Theodolite Droid), offered in version 1.0.26. The Android app is not quite as robust as the iOS version, but it’s offered as a free download.

What makes Theodolite most useful as a post-incident investigation tool is that the measured values indicated through the viewfinder can be memorialized immediately by simply “taking a picture” through the app, which is then saved as a JPEG (.jpg) file directly to your photos on the phone—or uploaded to the Cloud, if the phone is set to do so.

This level of efficiency, with all of the values being measured through the use of one app and being memorialized as a .jpg file and saved in your device’s photos, could not be achieved absent this technology. 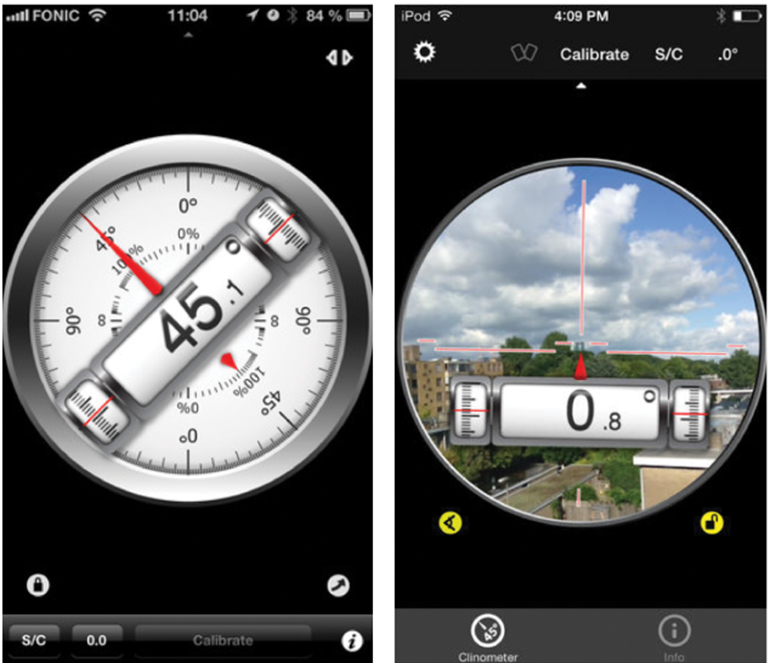 Clinometer level view and view-through formats.3. Clinometer. Another very helpful app for iOS and Android is Clinometer (now called “Clinometer and Bubble Level” from Peter Breitling for iOS), which may be used in various formats: level view, view-through, and bubble level. In level view mode it can be used along with a two-foot straight edge instead of using a two-foot smart level, or used in view-through mode for determining slope angles over distances.

Unlike Theodolite, Clinometer does not allow users to memorialize measurements taken through the app with the phone’s camera. However, there are some features that are very helpful to the investigator. For one, the app actually “speaks” the values being measured. As a result, making measurements through the app is very easy in bright sunlight or in other challenging situations where observing the screen may be difficult. 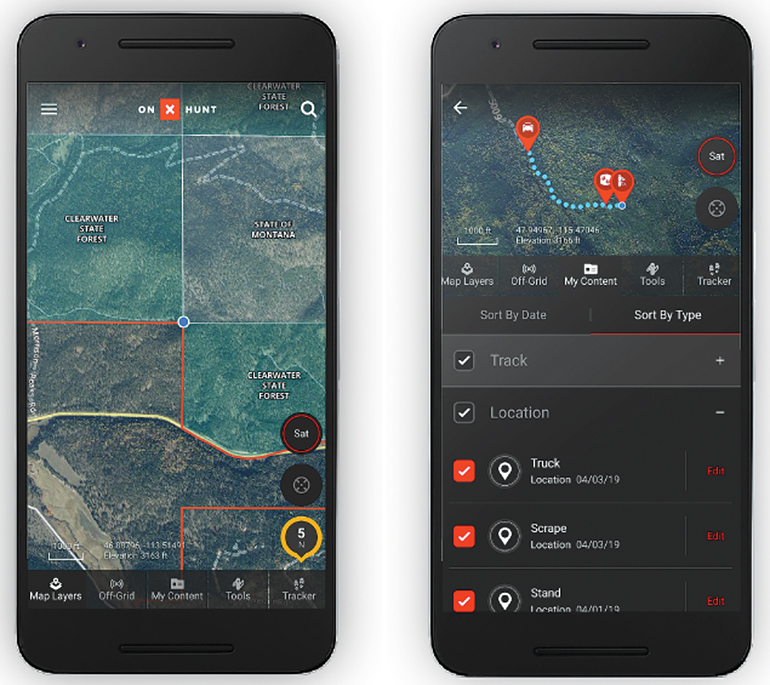 onX Hunt “my content” and “my location” views.4. onX Hunt. This navigation app was originally developed for hunters, but its features translate very well for post-incident investigations in the often-similar mountain, forested environments where both skiing/riding and hunting take place. I find it indispensable. The setting of waypoints and the use of the various map tools and overlays on the app provide numerous options for navigation in relation to trails and other landmarks, as well as adding waypoints, locations, paths of travel, and distances.

5. Smart level. While not tremendously high-tech, another in the field tool—used most often when measuring slope angles of component parts of jump features—is the two-foot smart level. This can be purchased at your local hardware store, Home Depot, Lowes, or online. It typically costs $50 to $70, and is a great investment. A smart level makes the process of jump feature measurement much more convenient (read “efficient”), especially in adverse weather conditions. 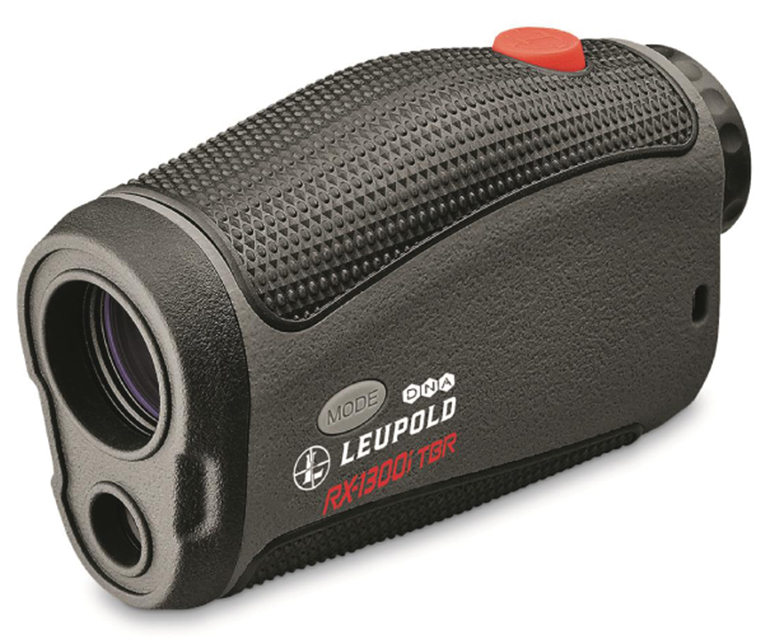 With the laser rangefinder, however, all it takes is the press of a button, bouncing the laser beam (yes, it is called a “beam”) off any type of reflective object or surface. Warning: if that object or surface is another investigator, be aware that rangefinders do NOT employ eye-safe laser beams. You should always ask the person that is being “lased” to close his or her eyes and/or turn away from the rangefinder when ranging distances.

There’s more to the Leupold than measuring the range, though. It also includes an integrated clinometer—so I can use it to measure both distance and slope angles through the same device, quickly, easily, and accurately. Using 6X magnification, it helps investigators measure longer distances out to 1,300 yards, and angles out to 800 yards.

Once the investigator’s field work is completed, what tools are available to take the collected evidence and data and memorialize and present them in a clear, understandable, and professional manner?

7. Microsoft Office. In a word, MS Word, or more accurately, the Microsoft Office Suite. Word, PowerPoint, and Excel are very powerful programs with which to memorialize and present your evidence and data.

Beyond producing narrative reports, Microsoft Word can be used to “digitize” the reproducible forms used by many resorts to make the final work-product easier to read and more professional-looking. MS Word may also be used to build “custom” diagram forms, which include modified or customized forms for a lift “line” and a lift-unload incident. 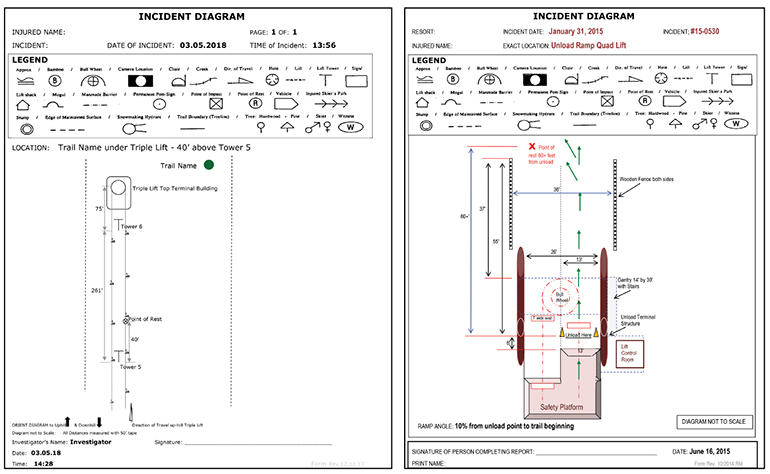 Use Microsoft Excel to construct diagram template forms of the various load and unload configurations ahead of time. That way, when a post-incident investigation is triggered, the investigator can pull out the appropriate diagram form and identify the various locations of persons involved, the stopped chair, cones, signs, etc., along with measuring just a few distances and dimensions. The measured values may then be presented in a clear, understandable and professional-looking fashion. 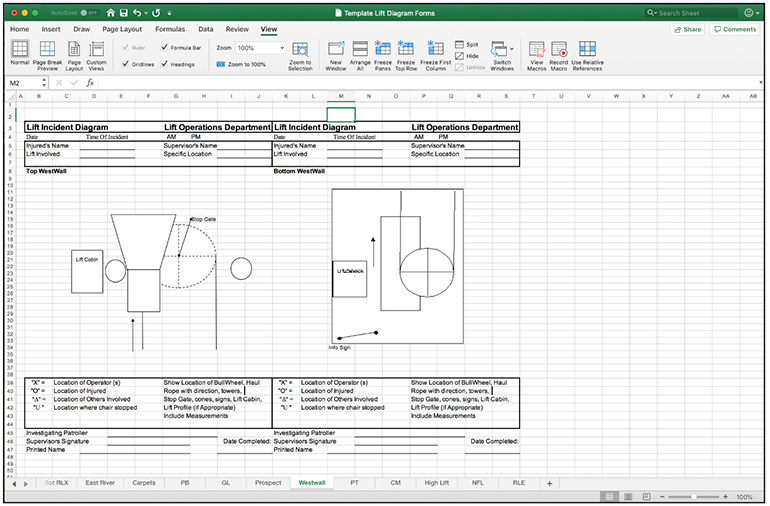 Create diagram templates for the load and unload configurations of your lifts in MS Excel.

Finally, use Microsoft PowerPoint to combine the photographs and measurements typically presented in separate documents into one powerful visual image.

The image at left was taken by the investigator from the chairlift that passed overhead of the incident locus, the area containing the baffles. The image at right, created in MS PowerPoint, adds an overlay of the respective paths of travel and points of impact (X) and rest (R) of the two skiers involved in a collision, the location of the eyewitness (W), along with the values of the measurements taken in the field.

IMPORTANT: it is not only what is in the investigation work product, but also how it is presented, that is key to completely and effectively presenting the evidence and data in a clear, cogent, and professional manner.

Whether you are in the field or back in the office, the technology—instruments, apps, and tools—readily available to you as a mountain resort investigator will assist in conducting a complete, effective, and efficient post-incident investigation. These technologies offer the ability to more effectively memorialize and present the evidence and data contained within.

Note: A huge thanks to Bill Snyder of Hunter Mountain, Crested Butte Mountain Resort, and Jimmy Lawrence for some of the post-incident investigation images.