Operating year-round has many benefits, but also comes with staffing challenges. 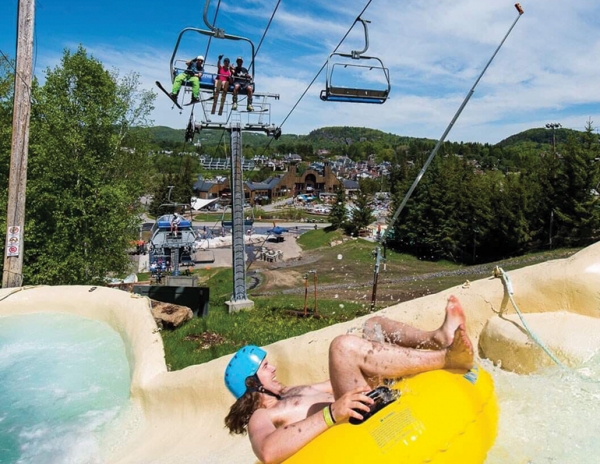 Sommet Saint-Sauveur in Quebec opened its waterpark on June 8, while the resort was still running winter—er, on-snow—operations.

On June 8, 2019, skiers were still carving turns at Sommet Saint-Sauveur in Quebec, thanks to a late-season bonanza of cool weather that saw the skiing and riding season extended across North America. It was a feather in the cap for operators, of course, but there was a downside as well: ski season bumped right into Sauveur’s summer programming, with the resort’s waterpark slated to open on the same day.

This shrinking transitional season “is a short period of time for us to react to all of these elements,” says Simon Pagé, director of client experience for Les Sommets resort group, which operates five ski resorts in Quebec, including Sommet Saint-Sauveur. “We’ve seen spring come pretty late the last three or four years. On the operations side, it puts a lot of pressure on.”

On the eve of closing out the winter season, for instance, workers at the resort were shoveling snow out of the waterslides and cutting grass at the park—while still grooming snow on the ski slopes.

Difficult Adjustments
It hasn’t always been this way, of course. Traditionally, resorts used summer to conduct maintenance and plan for the next season. “There’s a lot of project work that gets done in the shoulder seasons,” including landscaping, fencing, and other grounds maintenance, says Mike Quinn, vice president and general manager of the Mt. Hood Skibowl Winter and Summer Resort, which has an extensive summer program. Even areas that had basic summer operations, such as alpine slides, could look forward to spring and fall breaks.

But as snowmaking has extended ski seasons and summer operations have become more elaborate—and critical to the bottom line—the boundaries between seasons at some resorts have shrunk, or vanished altogether. A place like Camelback, Pa., “is literally a 365-day-a-year operation,” says Bob Serfass, director of mountain adventures for the resort, where this spring the ski mountain and snow tubing park overlapped with summer programming for several weeks in April.

Nor is this a new problem at these resorts. Sommet Saint-Sauveur isn’t exactly a newcomer to year-round operations: the waterpark opened in 1986, and over the subsequent decades other attractions have been added, including a mountain coaster, zip line, kids’ activity park, and mini golf course.

Staff attrition. As programming has expanded, so have difficulties around staff retention and training. Only one in three seasonal workers at Les Sommets stays on from season to season, according to Simon Lemieux, the company’s director of human resources. Other resorts report similar issues with staff retention.

“Those losses usually occur in the transition from winter to summer or from winter to the next winter,” says Lemieux. “We have approximately 1,800 employees and lose one-third that we have to hire each year. It’s a big challenge. People tend to find stable jobs. Or they have summer jobs and they’re ready to leave—and we’re not.”

Exacerbating the problem are low unemployment rates. “There’s a lot of competition for the labor force, so we go through each season short staffed, and that can burn people out,” says Serfass. And that makes matters even worse.

“Seasonal staff is no longer the answer,” he adds. “Year-round staff that sticks with the resort is what everyone is looking for. You need to do something to keep them on.”

Part-time realities. But full-time work is only a partial answer. Some workers, such as college students, have strict end dates and will always have to be replaced. Others move on to new jobs that pay better or offer more opportunities for advancement.

And few resorts have similar staffing needs in both winter and summer. Les Sommets, for example, needs more than four times as many workers in winter at its network of five Quebec resorts than in summer. Few resorts can provide a full-time job for everyone.

Flexibility and Training
Cross training. Cross training is critical to staff retention, says Pagé. Some ski instructors may become mountain-biking instructors, for example. Ski patrollers face bigger shifts in responsibilities: the mountain bike park needs only a handful of supervision and safety personnel. Groomers, too, “have to look at wearing a different hat” if they want to stick in summer, says Quinn. The key to this flexibility, he says, arises from hiring based on “looking for attitude and training for skills.”

For some employees—senior staff, maintenance, retail, food-service workers—the job responsibilities don’t change much from winter to summer. For others, the transition is fairly natural.

“For point-of-sale, we’re really training people for every product, from food-service cashier to rentals and ski-school bookings,” says Pagé. “I think that’s the way to keep people—not to hire for a department, but for performance level, especially with seasonal employees.”

More-frequent training. Whereas ski areas once typically ran a single staff-training program in the fall, now training takes place multiple times a year, even when operations are in full gear. Next year, Les Sommets is opening a new training school timed to commence a week or two prior to the expected opening of each season. The resort group also is standardizing training company-wide, and adding a full-time position for its food and beverage operations to specifically focus on employee training.

“We have to rethink how we welcome and train people,” says Lemieux. Les Sommets is evaluating the possibility of onboarding employees earlier to give them proper training before the season begins. “The current process trains new employees on their first shift or a short time before their station opens, making their work very difficult for the first few days. Many of them leave due to the high pressure and lack of proper training,” he says.

Perks and vacations. To help retain experienced staff from season to season and prevent burnout, Les Sommets also has added more vacation time for full-time workers, and insists that they take time off.

“The expectation has been that people would take their vacations in the spring, but now there’s no offseason,” says Lemieux. “The oldest employees are now entitled to five weeks of vacation annually. We must therefore be flexible to allow our employees to be absent during the season. These employees are committed to the smooth running of operations, but we must ensure that they have planned rest periods to enable them to be effective at work, and in their life in general.”

To retain staff, Camelback has raised wages, increased employee perks such as free park access during all non-working hours, offers snacks and gift giveaways for employees, and established clear paths for advancement and internal hiring to reassure workers that there is a future at the company beyond seasonal work.

Making work fun. Camelback also has loosened up work rules to allow more opportunities to “let workers be who they are”—the kind of individualistic freedom sought by Millennial and Gen Z staff members, says Serfass. “We allow (trimmed) beards, mustaches, and goatees. Colored hair, piercings and gauges are now standard and acceptable. Tattoos are fine,” he says. “In short, feel free to be you as long as it is not profane or disrespectful to others.”

As a further enticement, “When we hire we make a concerted effort to ask people if their friends are looking for work, because we know this is a fun place to work with friends,” he says.

Sharing Culture
During the weeks when the snow tubing operation is winding down and the waterpark is getting ready to open, departments at Camelback frequently share staff between operations, even if just for a few hours a day. “Crossover season is a tough one for us,” says Serfass. “We do what we need to keep seasonal staff gainfully employed so we don’t lose them.”

Similarly, Les Sommets shares staff between its resorts as needed, especially in the spring, since only two of the five operate year-round. The company also is establishing a cross-trained “rapid response team” of employees who can provide flexibility in staffing during transitional times of year, says Lemieux.

Year-Round Opportunities
While resorts still heavily rely on seasonal staff, the growing focus on summer programs has led to more hiring of full-time, year-round employees. Camelback is looking to hire up to 10 new full-time staffers, says Serfass, and other resorts plan similar additions.

“The more reliable full-time work we can give people, the more they stay on,” says Quinn, adding that the shorter shoulder seasons allow the resort to keep workers on the payroll while they transition between their winter and summer jobs. “Burnout happens during high season, summer and winter, typically two-thirds through the season. Having the small breaks in between seasons helps, and employee morale is generally improved when year-round work can be offered.”

Positive change. Despite staffing challenges, the shift to year-round operations has unquestionably been a blessing to most resorts. Bogus Basin near Boise, Idaho, last year began daily summer programming for the first time. The resort has added a variety of warm-weather attractions in the last three years, including a mountain coaster, a kids zone with a climbing wall and bungee trampoline, and a gold-panning station.

As a result, “We’ve been able to retain and provide new opportunities for our seasonal team members and add 10 new year-round positions,” says Susan Saad, the resort’s director of community relations.

And there are advantages to the full summer schedule for part-time staff, too. “A lot of our part-time workers are high-school kids, and retention is better if they can stay for the entire summer,” Saad says. “It’s a great way to promote new job opportunities in the community and add more job responsibilities for those who want them.”