An Eye for Ideas

A profile of the man who originated this regular feature and how he came to chronicle the collective genius of the mountain ops community. 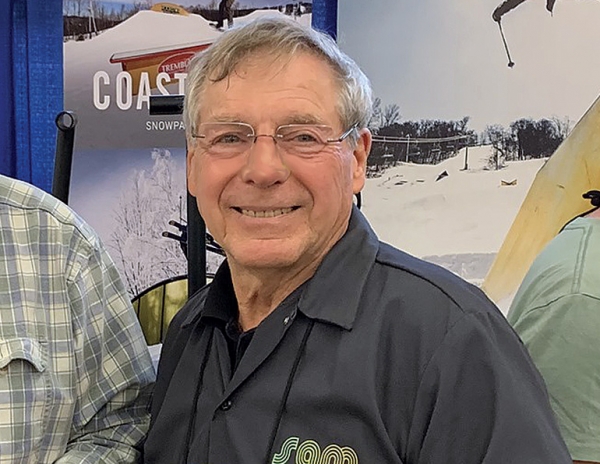 Sam Geise has been the mastermind behind this column for all its 22 years of existence. His unique vision and perspective have allowed us to showcase ingenious and useful creations from folks who don't often receive much publicity. Now, we'd like to return the favor, and shine the spotlight on a guy who's been a trailblazer and key contributor for SAM.

Even before Sam began building Idea Files in 1997, he kept a sharp eye on the resorts he visited as a lift inspector for Safehold Special Risk, or Pettit Morry Insurance as it was known then, and for his own Geise Engineering, which sells handle tows and Magic Carpets.

When Sam started with Pettit Morry in 1988, he was already working his way into the ski industry. He had been chief engineer at Paulsen Wire Rope, a major producer of ski lift wire rope, for 10 years. "They also provided wire rope for lots of different uses," Sam says. including elevators in deep mines and the World Trade Center. The company also outfitted fishing vessels as well as military transport ships. "The ships had large doors so that big vehicles could roll on and off, and wire rope controlled the door," Sam explains.

"Most of the people in these industries weren't very happy," he adds. "It was dangerous and unpleasant work."

A chance inspection of a wire rope on a ski lift introduced Sam to the happier world of ski operations. Gregg Confer, then (and still) the GM at Elk Mountain, Pa., asked Sam to insepct the wire rope on a chairlift one weekend. Sam went with his son, and had a great day. "I thought, if I could work in this industry, that would be tops," he recalls.

Before long, he was involved in the ANSI B77 lift standard. When Pettit Morry was looking for an inspector, Sam stepped up.

"My job took me to about 50 ski areas a year doing lift inspections and risk management work. I took photos of accidents and the eventual solutions to problems. I put my photos in a 3-ring binder to show ski areas I would visit," Sam says. Fellow engineers Maynard Russell and Howard Anderson were doing the same thing.

But Sam's curiosity took him far beyond the specific inspection-related issues that inspectors typically share with resorts. He casts a wide eye, and has a rare knack for spotting clever ideas all across the resorts he visits.

"That has to do with me being severely dyslexic," he says. "Somehow, I focus on things visually. It comes second nature to me to observe things."

That visual focus extends to photography. "Photography was a hobby of my dad’s. I grew up with our kitchen turned into a dark room at night on weekends. I always had a camera and my dad would critique my photos. I also took a few classes on photography. This skill helps me take good photos of the ideas I find," says Sam.

But always, Sam aims to tell a bigger story. "It helps to know the why an idea is good. I try to tell a story, provide context for the idea, not just picture the thing itself."

Often, that story is as important as the idea, as it reveals the thought process that went into it. And that can inspire others to look for creative solutions to life's little problems. "There is lots of creativity from guys who don't go to industry trade shows," Sam says. "Idea Files is a way to share information and solutions that make the job easier.

"I often show ski areas my proposed ideas to get their opinion. The best answer back is, 'Why didn’t I think of that?'”

But nothing, not even good things, lasts forever. Sam is now in his 70s and scaling back on work. "I can't keep doing this," he says. "I have 15 areas to inspect this year, but before long, I won't be able to do the travel.

"It would be nice if someone else would get excited about finding ideas. I would love to see resorts submit them, and write them up in their own words." Because there's always a good story behind every great idea, and great ideas are worth sharing.

In the spirit of sharing, here's the first-ever Idea Files, from SAM May 1997. How well have these ideas stood the test of time? Here's how Sam sees it:

"Using diapers to catch an oil leak on a bullwheel was both clever and funny. It might not seem so funny today."

"The PVC caps used to cover exposed steel bolts was a smart idea, and one that applies today." 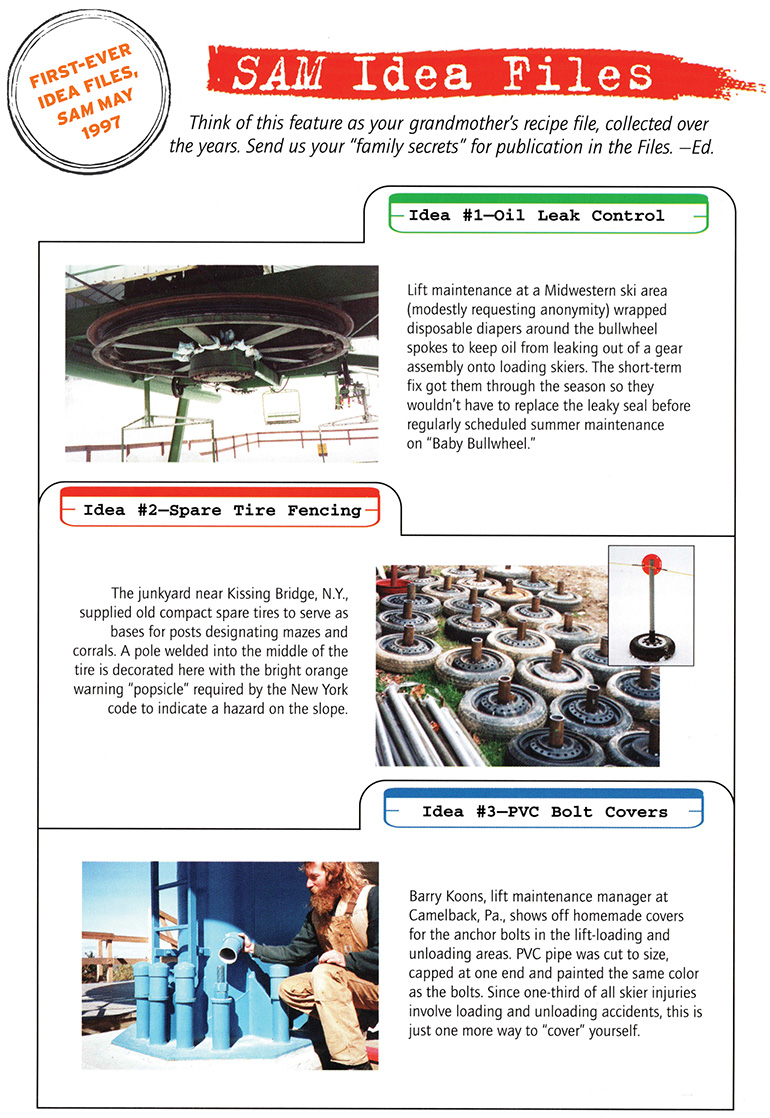